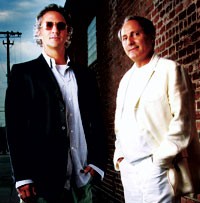 LOS ANGELES — Apparel veteran Sean Barron is a believer in partnerships — even if they don’t always last.

Barron launched Katayone Adeli’s line with the designer in 1996 and left the business in 2000. He then created the wildly successful Joie label with denim designer Joie Rucker in 2001. As reported, the two split last month, leaving Barron his 45 percent of the line and, yes, a new partner: Serge Azria, older brother by two years of Max Azria of BCBG fame. Azria took over Rucker’s 45 percent stake in the business and Andrew Rosen, president of Theory, holds the other 10 percent.

This time, Barron thinks things will work out.

“We are 100 percent on the same page,” said Barron, in a meeting at company headquarters in Vernon, Calif. “[Joie Rucker and I] parted ways for creative reasons. She’s an amazing woman, but we had different ideas about where the company will go.” Rucker plans to introduce a new line under a different label in February for fall 2005 selling.

It’s fair to say Barron is relying on Azria’s business expertise to take the company to a new level. Wholesale volume last year hit $32 million with distribution in the U.S., Germany, Italy, England and Japan, and both think Joie can vault to a $100 million brand within three years. The growth will come via broader penetration into existing accounts and lifestyle additions such as shoes, handbags and accessories.

“Sexy, casual comfortable clothes is the Joie message that will continue, and we plan to take that and explode the brand by bringing in Serge’s 30 years of experience in the industry,” Barron said.

Azria launched BCBG Footwear in 1996 and licensed the product to Canada’s Algo Group in 2000. Two years ago, Azria formed a partnership with VCS Group LLC and bought back the footwear license, taking it from a $40 million venture to $100 million. He sold his stake to VCS last November, and was ready to come out of retirement after some long vacations.

“I love it when things are difficult,” said Azria, the new creative director, dressed in a cream Polo Ralph Lauren jacket, white slacks and oxfords. “That’s what gets me excited. Otherwise, I’d stay at home by the pool.”

To help reach new heights, the company has beefed up its infrastructure with “a dream team,” according to Barron. In the last three weeks, it has hired about 10 to 15 employees overseeing merchandising, production and even technical operations.

“Today, when you talk about a global business, you need visionaries to fill out the pieces in the puzzle,” said Barron, who added that procedures were vastly different in the early days of the business. “Before, we just winged it.”

As far as the soul of the line, the duo says it will undergo an evolution, not a radical transformation.

Joie started with a cargo-inspiration pant (notably a low-slung style honored in a glass case in the company’s lobby) sprinkled with a few tops. The cargo silhouette is back, along with a broader collection infused with ethnic, embellished touches and new shapes. Billowy silk and cotton tunics edged with hand embroidery (some in directional shorter styles), denim accented with a Swarovski butterfly on the hip and a sweatshirt gone preppy in a cropped, plunging V-neck shape are a few of the hallmarks. Lifestyle pieces project a fluid, breathable ease, such as slouchy, lightweight corduroy slacks in coral, cropped and belted cashmere sweaters, shrunken denim jackets lined in poplin and easy-fitting trousers with angled pockets. The line ships in November and December for resort and spring.

What’s different the two said is the line’s breadth. They’ve chopped down the presentation to 25 looks, from a high of 75. Instead of 20 bottoms, there will be seven or eight to choose from in denim, twill and cotton ripstop.

“We’re more focused with more quality fabrics, more q.c. [quality control] at every step of the way,” Azria said. “Every piece is an item and should stand by itself.”

To do that, he said the line needs to become more important to retailers. That means creating exclusive product for stores (like the hand-painted chiffon caftan for Bergdorf Goodman’s catalogue), touting items of the month — such as the pair of jeans accented with the Swarovski butterfly — and even debuting an all-white collection.

“It’s risky, but you only win in the end when you take a risk,” Azria said.

Retailers, such as Scoop, got a peek of the new Joie during Intermezzo and think the line can continue without its namesake.

“It’s a little more feminine, a little less utilitarian, which is good for our girly store,” said Stefani Greenfield, co-owner of Scoop, which picked up the line. “I appreciate Serge’s and Sean’s willingness to work with retailers, and I think only the best is yet to come for Joie the person and Joie the brand.”

Down the road, the two envision adding lingerie and swimwear. Once Azria’s non-compete clause expires in 16 months, he also plans to produce shoes and handbags in-house.

“There are Jimmy Choos and Manolos, but no one is doing a beautiful $200 pump,” Barron said. “We want to go into under-served niches and what makes sense for our brand. We’re not going to be doing evening gowns.”

Currently, Joie’s women’s line represents 70 percent of the business and is expected to grow to $65 million in wholesale volume in three years. Also under the umbrella is the men’s line, in its third season, which will grow to $15 million at wholesale in three years. And Future Vintage, a line of premium denim with retail price points north of $200, is expected to deliver $20 million in wholesale volume in three years. Launched with the help of Rucker, the line shipped this month to about 32 stores from Barneys New York to E Street Denim in Highland Park, Ill.