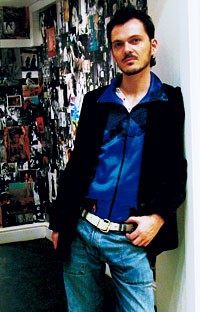 LONDON — Matthew Williamson and Martin Margiela have taken over two Mayfair art galleries for their first London stores, and their homegrown approach to interior design couldn’t be farther away from the polished, megabrand looks so popular on nearby Bond Street.

Williamson lifted furniture and objects from his own home to decorate his first stand-alone store, which is a riot of eye-popping color and swirly, garden-inspired patterns. The store, which spans 2,200 square feet, opened on Bruton Street late last month.

The wooden Indian armoire that now holds Williamson’s rainbow of colored candles once contained his cutlery and glassware at home. The stone Buddha that sits inside the glass-enclosed, subtropical garden came from his own backyard. In a nearby dressing room, a wooden armchair is one of Williamson’s finds from London’s Camden Market. The designer later painted it fluorescent pink and covered it with a carpet of purple fabric flowers.

“It was important that this store look like my environment. I love interiors and I didn’t want this store to be someone else’s fantasy,” said the designer during a walk-through of the store, formerly the Bruton Street Gallery.

Williamson himself decorated the bathroom — and the “icon corridor” that leads to it — with a collage of star portraits, including Marilyn Monroe, Drew Barrymore, Michael Jackson and Susan Sarandon. He sourced the images from magazines and archives, pasted them on the walls and gave it all a slick coat of varnish.

“My idea was to make this store like a treasure trove, where people don’t know what’s around the corner,” he said.

Williamson took his own fluorescent pens to the handmade Chinese silk wallpaper, giving the pattern of exotic birds fluorescent touches. He also festooned the silk fabric with pins and brooches that he picked up from London flea markets.

The look is clearly working. Sales projections for the first year are $1.1 million, or 600,000 pounds, and according to the company, sales in the first week reached $108,000, or 59,000 pounds. All figures have been converted at current exchange.

Williamson is already planning to scout a second store location, this time in New York. “I want to watch this store’s progress for 12 months, but I hope to start looking soon for a space in New York,” he said.

Around the corner from Williamson’s store on Bruton Place, Margiela takes a similar homemade approach to the space that was most recently the Timothy Taylor Gallery, and which was formerly horse stables. The store, Margiela’s first U.K. unit, opened in late March and carries the designer’s men’s, women’s and accessories lines.

The 1,512-square-foot store resembles the designer’s Paris and Tokyo units with its all-white interiors, unfinished edges, bits of secondhand furniture and fittings. “The store’s philosophy is about preserving the previous lives of objects, and living with imperfections,” said Sandrine Reboux, store manager.

The cash desk is made from two French supermarket tills, the wooden doors upstairs are from old French apartments and hotels and makeshift walls are fashioned from old luggage or plastic milk cartons. The pockmarked walls still bear the pencil marks of architects and painters who have worked in the space. “It’s all part of the story of the building,” said Reboux.

Downstairs, in a makeshift cinema where videos of Margiela shows will be projected, old wooden chairs that have been painted white hang on black walls, and can be pulled down anytime to accommodate visitors.

Margiela declined to give a sales projection for the store.

On the ground floor, in a small room near the entrance, is Margiela’s graffiti room where visitors can scribble their thoughts on the walls. Clearly, Margiela’s mind is in a positive place. A plastic box near the cash register is crammed with champagne corks, decorated with a bit of the designer’s signature white cotton fabric — a gift to customers.