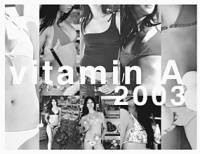 NEW YORK — Two stylish swim labels came to town last week to show off their latest looks and to check out the New York scene.

After staging the first Rosa Cha runway show under the tents in Bryant Park, Amir Slama, president of Rosa Cha, showed those runway looks and the company’s new accessories line to buyers at the Mercer Hotel. The company is based in São Paulo, Brazil.

Images of Naomi Campbell and other models hitting the catwalk in the company’s vibrant bikinis flashed across a TV screen. The model befriended Slama after visiting his store in São Paulo and threw the party after the runway show, he said.

The real eye-catcher at the show was the “personal print” suits the models wore to close the show. Each model wore swimsuits printed with multiple shots of the same image of themselves, reminiscent of Andy Warhol. Rosa Cha is working with a New York specialty store to introduce the technology to American consumers in the coming months, Slama said. Shoppers will be able to have personal photos printed on Rosa Cha swimsuits.

The company has also introduced an intricate laser technology for swimwear that allows razor-sharp details. A tank, for example, has a cut-out center with silhouettes of a seahorse, crab and other beach creatures.

Vitamin A’s founder and swimwear designer Amahlia Stevens was also in town to help build sales beyond her existing 50 accounts. She checked out prospective retailers and showed off her ready-to-wear-inspired swimwear. She has hired Simply Chic’s showroom here to rep her line on the East Coast.

Based in Laguna, Calif., Vitamin A is known for its stylish swim separates that wholesale for $25 and $29. The 2003 collection has one-shoulder tanks, belted boy-shorts and halter triangle tops in unusual shades like aubergine, jade and spice brown. All of the line’s tops and bottoms are interchangeable. For the first time, she is offering prints like an Age of Aquarius-inspired style and florals instead of her signature solids. Stevens studied printmaking, oil painting and graphic design.

“In my mind, everything translates easily into a bikini, whether it’s a color or silhouette. The palette I use is not about what’s going on in swimwear,” she said. “It merchandises back with the clothes in my favorite stores.”

Fred Segal in Los Angeles and TG170 on the Lower East Side in Manhattan are two of those spots and were among the first retailers to pick up her line. At that time, she went door-to-door with a bagful of bikinis to stores she liked to shop, not necessarily swimwear stores.