The Paris-based Workshop N.Y. moved from its former loft-like locale at Chelsea Markets to a brightly lit... 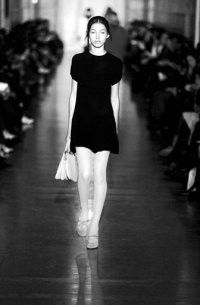 The Paris-based Workshop N.Y. moved from its former loft-like locale at Chelsea Markets to a brightly lit larger space at the Metropolitan Pavilion at 125 West 18th Street. The new space, spanning 14,000 square feet, featured all the apparel and accessories vendors spread over one floor —something retailers said they wanted after the previous venue staged the show over a couple floors — traversed only by elevator, said Laurence Marc, finance director of the show.

To aid in selling, Workshop sponsored a Web site featuring a virtual trade show so retailers can still contact exhibitors after the show.

“The openness is still there, but at the same time it’s less artsy and more professional,” Marc said. “Buyers also know this place better than they know Chelsea Markets. We have also gotten positive feedback about having everyone on the same floor.”

But on the selling floor, many vendors said business was slow and speculated that the threat of war and the Code Orange terrorism alert still in effect when the show ended Feb. 24 scared buyers from traveling.

“It’s really slow, but the selection of retailers is great. Still, we have found some cool little stores in little cities and that’s hard to do at the bigger shows,” said Marie Claude Gravel, a partner at the Montreal-based ready-to-wear company Dubuc. “But it’s so difficult to say. People are waiting to buy and we might get a phone call tomorrow from Barneys with an order for fall.”

On a positive note, Ricardo Sarcos, coordinator for men’s and women’s handbag firm Leonello Borghi, said the quality of the retailers seemed higher and they weren’t so concerned about price.

“But I still think people aren’t coming because they’re nervous about the war,” Sarcos said. “Retailers are sending their local reps and taking notes and pictures.”

Yet, for new ready-to-wear designer Heather Harrison of the London-based Expiration Date, Workshop was worth the travel from England, as she secured new retail accounts in Manhattan, Los Angeles, Texas and Japan.

“People are buying a lot of Sixties-influenced items like this minidress,” said Harrison, pointing to a navy blue wool mini that wholesales for $134, adding that a vintage-looking wool and cashmere cape was also a bestseller at $176 wholesale. “We think the line is classic but hope it will be worn for a long time and considered vintage one day, too.”

Takashimaya assistant buyer Christine Ghee was shopping Workshop and the D&A show for unusual things for her store. “The items [we look for] really have to be one-of-a-kind with maybe a technical aspect or great fabric, and also something that’s not carried by everyone,” Ghee said, while perusing a line of accessories at Workshop.

Meanwhile, the atmosphere across town was upbeat and colorful at D&A, taking place in a sunny loft space at 601 West 26th Street. The show, which premiered here in September and ended its latest edition last Wednesday, featured buyer-friendly details like Internet stations, a lounge to relax, an in-house DJ and offbeat, yet fun items for a boutique, like designer rugs and fashion and art books through Distributed Art Publishers (D.A.P.).

D&A, which in addition to its home base in Los Angeles travels to Tokyo each year, attracted some 1,500 retailers, but like Workshop, the show’s organizers felt there would have been more people if not for Code Orange.

“Still, the show is double the exhibitors from September and traffic appears to have increased,” said Ed Mandelbaum, co-founder along with Barbara Kramer. “We’re more about quality than quantity and we believe we have the cream of the crop. Our job is to make it easy for the retailers.

Judy Margolis, owner of Origins boutique in Santa Fe, N.M., said, “I always come to this show because I always find something unique and interesting,” as she wrote orders for embellished Indian-inspired skirts from Los Angeles-designer Lotta. “We don’t carry what’s sold in department stores but wearable art and basics — things that photograph well.”

For fall, buyers were looking for ethnic-inspired looks, Sixties-influenced miniskirts, shorter jackets with retro detailing and colorful items with texture.

San Francisco retailer Nicole Fife said she liked Jill Stuart for its clean, mod influence and was planning to spend about $100,000 on this buying trip, including stops at Workshop and Fashion Coterie.

“Still, I end up going home and taking a lot of paper and I sort through it all and then finalize,” said Fife, owner of Zoe.

Susan Denner, sales manager for Jill Stuart, said, “My buyers just enjoy the whole space. You get well-looked after [at D&A]. I picked up a lot of new business from New Jersey, Philadelphia and a lot of new accounts that I haven’t seen in the showroom. I also saw clients from [South] Korea, Puerto Rico and Belgium.”