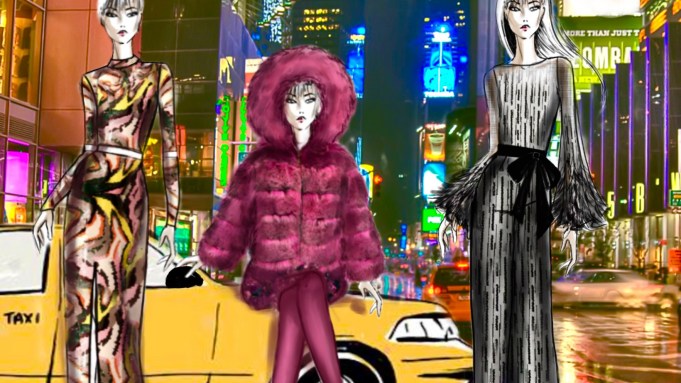 As the saying goes, “A picture is worth a thousand words.” In fashion, a sketch, swatch of fabric, or a memory can be worth so much more.

Ahead of the first day of fashion week on Feb. 11, New York’s designers gave WWD a sneak preview into what inspired their fall collections. From Colin LoCascio’s “bridge-and-tunnel party girls” to the “Southern lady and Bluesman archetypes” at House of Aama, the clothes are expected to be as varied and dynamic as the city itself.

Rather than adhere to the traditional runway format, designers are using the challenges presented by the global climate as an opportunity to push American fashion forward. A mix of in-person experiences and digital releases are slated to be the new norm. Some designers will even experiment with both in the same presentation: the ultimate clash of tactility and high-tech.

For instance, Maisie Schloss, a protégé of Kanye West who became synonymous with bold patterns reminiscent of Y2K-era fashion, was inspired by “The porous line between reality and fantasy.” Schloss’ metaverse concept will be unveiled at the Chelsea Factory on Feb. 12.

Anna Sui, a longtime fan of theatrical runway shows, will debut her fall collection via video this season. Meanwhile, newcomer Conley Averett of knitwear label Judy Turner will close out the week on Feb. 16 with an intimate cocktail reception at swanky Manhattan eatery Michael’s.

Here, WWD presents the first of a three-part series looking at the inspirations behind the New York fall 2022 collections.