With the headwinds the American industry is facing, New York Fashion Week cannot carry on the same as it has been in September. And maybe that's for the better. If there's anytime to shake the foundation, it's right now.

Proving that not even the billionaire backing of Howard and Nancy Marks can stave off the financial effects of the coronavirus, Sies Marjan revealed Monday it is closing its doors after five years. And just like that, another bright light of New York fashion — and New York Fashion Week — is gone.

What a difference a few months makes. In February, Sies Marjan designer Sander Lak seemed finally to have settled into a next-gen headliner position, with a collection shown against the backdrop of the Manhattan skyline that ticked off the boxes of showmanship, high-style, wearability and sustainability, with an arty tie-in to a Rem Koolhaas exhibition at the Guggenheim Museum to boot. But the one-two punch of the Barneys New York bankruptcy (the U.S. department store had the early exclusive on the label) and COVID-19 proved too much for the internationally trained designer, who chose to come to New York to start his business because if you can make it there, you’ll make it anywhere.

He’s the first high-profile casualty of what will sadly probably be many more. With the headwinds the American industry is facing, New York Fashion Week cannot possibly carry on the same as it has been in September. And maybe that’s for the better. If there’s anytime to shake the foundation, it’s right now.

The Council of Fashion Designers of America confirmed this week it’s looking at Sept. 14 to 16 for virtual shows and small salon-style presentations, with the possible addition of Sept. 17 if enough designers apply to be on the official calendar. The application process opens at the end of the month.

Marquee finisher Marc Jacobs said he’s sitting out the spring 2021 runway season, following companywide layoffs. Michael Kors, who in February serenaded his audience with the musical stylings of country singer Orville Peck, will also be a no-show for September. (He’s pushing to October.)

Ralph Lauren had already broken away from the fashion pack, and was due to present his fall 2020 fashion show in April before it had to be canceled when the virus hit. It’s unclear what his plans are for September. Tommy Hilfiger has also been noncommittal, telling WWD he could soon transform his TommyNow extravaganzas to virtual events. Diane Von Furstenberg seems unlikely to make a runway splash, given the restructuring her company is going through, and Phillip Lim is also TBD.

Not even CFDA chairman Tom Ford has confirmed a show for September. After presenting his fall 2020 collection in L.A. in February over Oscars weekend, one wonders if he will be tempted to align with the awards show again, now that it has been postponed to April 2021? That would probably not be a popular choice a second time, either, considering his current leadership position.

But September is not entirely lost.

One major player who has committed to doing an event is Pyer Moss designer Kerby Jean-Raymond, who will have a (presumably socially distant) drive-in premiere for his new film, “American, Also,” about the lead up to his September 2019 show about forgotten Black rock ‘n’ roll pioneer Sister Rosetta Tharpe.

It’s unclear whether he will present a new collection as part of it (either for his own label or Reebok). But his p.r. confirmed the event will not be part of the NYFW calendar, which is a pointed statement coming from Jean-Raymond, a CFDA Vogue Fashion Fund Award winner and CFDA board member.

So what will be?

It would stand to reason that A Common Thread will be a factor, the fundraising initiative that has raised nearly $5 million to help designers struggling during the pandemic, with grants being awarded to Rodarte, Yeohlee, Eckhaus Latta, Cushnie, Prabal Gurung and Alabama Chanin among others. And rather than having everyone go their own way, an organized showing of several designers at one time, in one place, strengthens the industry by its sheer focus of attention.

But the spear of that initiative, along with Ford and the CFDA, is Vogue editor in chief Anna Wintour, who is at the center of a firestorm of negativity about her lack of diversity efforts at Condé Nast. It remains to be seen how that will affect her position to rally the industry, or speak for it. But the call for social justice and increased representation in fashion and media that has come out of the Black Lives Matter movement does seem to make the CFDA’s chummy relationship with Vogue increasingly problematic. 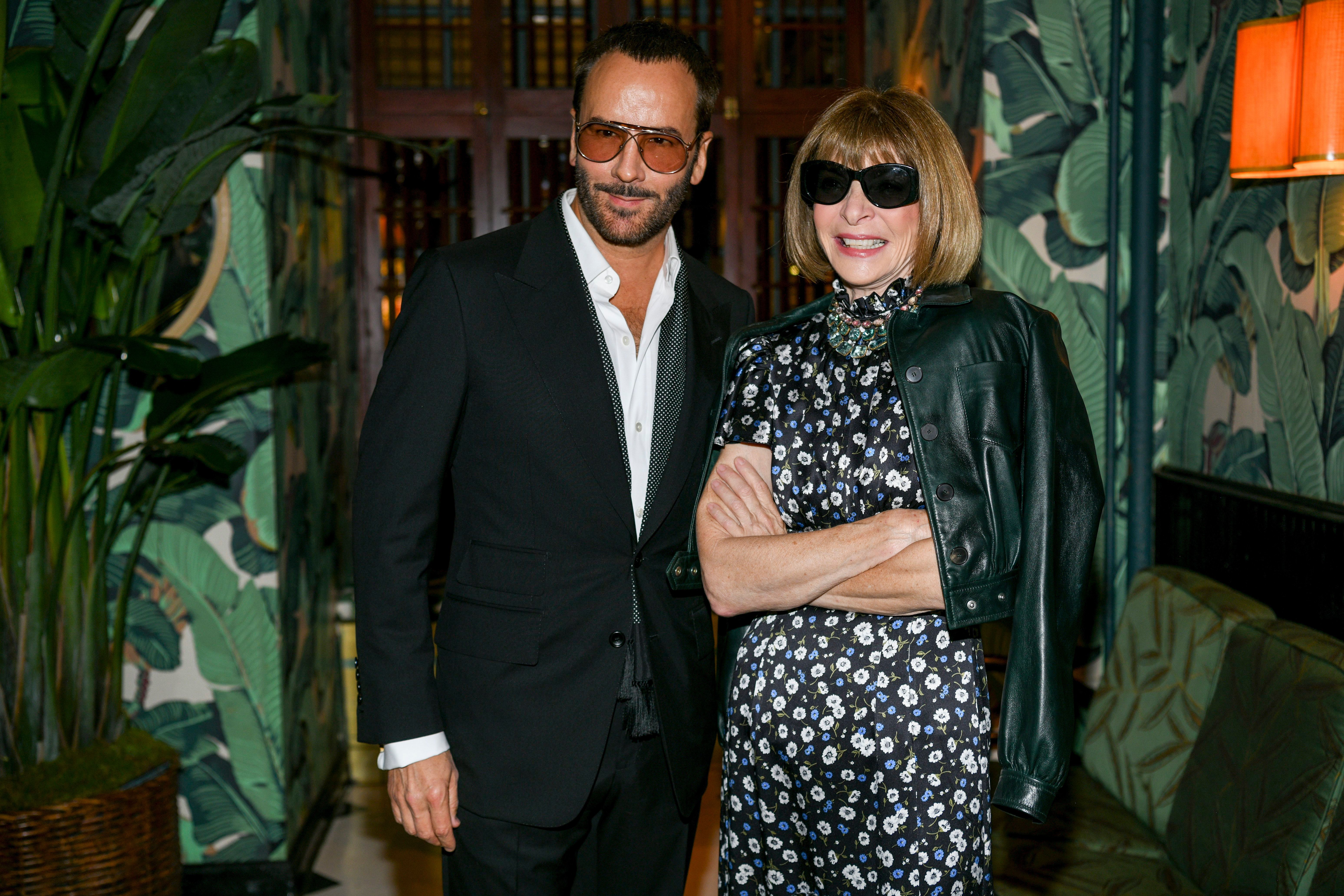 The status-quo system is twofold. While the CFDA is the keeper of the NYFW calendar, IMG plans to continue to produce the main centralized event. The two entities appear to be working together to shape what comes in September, giving designers various options, both physical and digital, and “looking for a new platform to amplify their collections,” according to the CFDA.

Given the climbing cases of COVID-19 and the potential for a second wave, virtual events seem most likely, though brands will need to up their game to capture the attention and imagination of the industry and improve on the tepid London outings last weekend. That’s where Hollywood could come in, whether with the help of Ford and his talent agency of choice, CAA, or IMG, or Amazon Studios.

Then again, maybe a new establishment is in order, so that the impression is not that the CFDA is tied at the hip to Vogue. How about giving Harper’s Bazaar’s new editor, Samira Nasr, some say, and building a new paradigm for identifying, recognizing and supporting new American design talent that’s not tied to one taste level and commercial interest, with the same voices speaking for it? (Highsnobiety has stepped up to curate its own virtual fashion week for Paris Men’s, as an example.)

Clearly, there is a lot of economic uncertainty to contend with — and a need for soul-searching. But it’s worth remembering that while America is an imperfect democracy that has not served all its citizens equally (a fact that has been laid bare by police violence against Black people, the recent Black Lives Matter protests and ensuing cultural reckoning), the struggle has shaped its identity.

It’s shaped the best of American fashion’s identity, too, from the Black models that won the Battle of Versailles to Bronx-born Ralph Lifshitz designing himself into a WASP world; from Jean-Raymond’s brave decision to bring police brutality to the runway in 2015, to the body positivity movement that originated in New York — not Europe, New York.

Perhaps what New York fashion and New York Fashion Week need to reinvent is a changing of the elite guard that allows more visibility into that struggle. Out with the gloss, in with the grassroots. That would be uniquely American and uniquely of this moment. From this pandemic and call for social justice, there are many new leaders worth listening to: Aurora James, who started the 15 Percent Pledge; Jean-Raymond and Christian Siriano, who were among the first to lend a hand and make PPE for frontline essential workers in New York, and Brandon Maxwell, who has been authentic in his support for the next generation of student designers around the country, engaging them on IG Live every night and checking in on their projects. 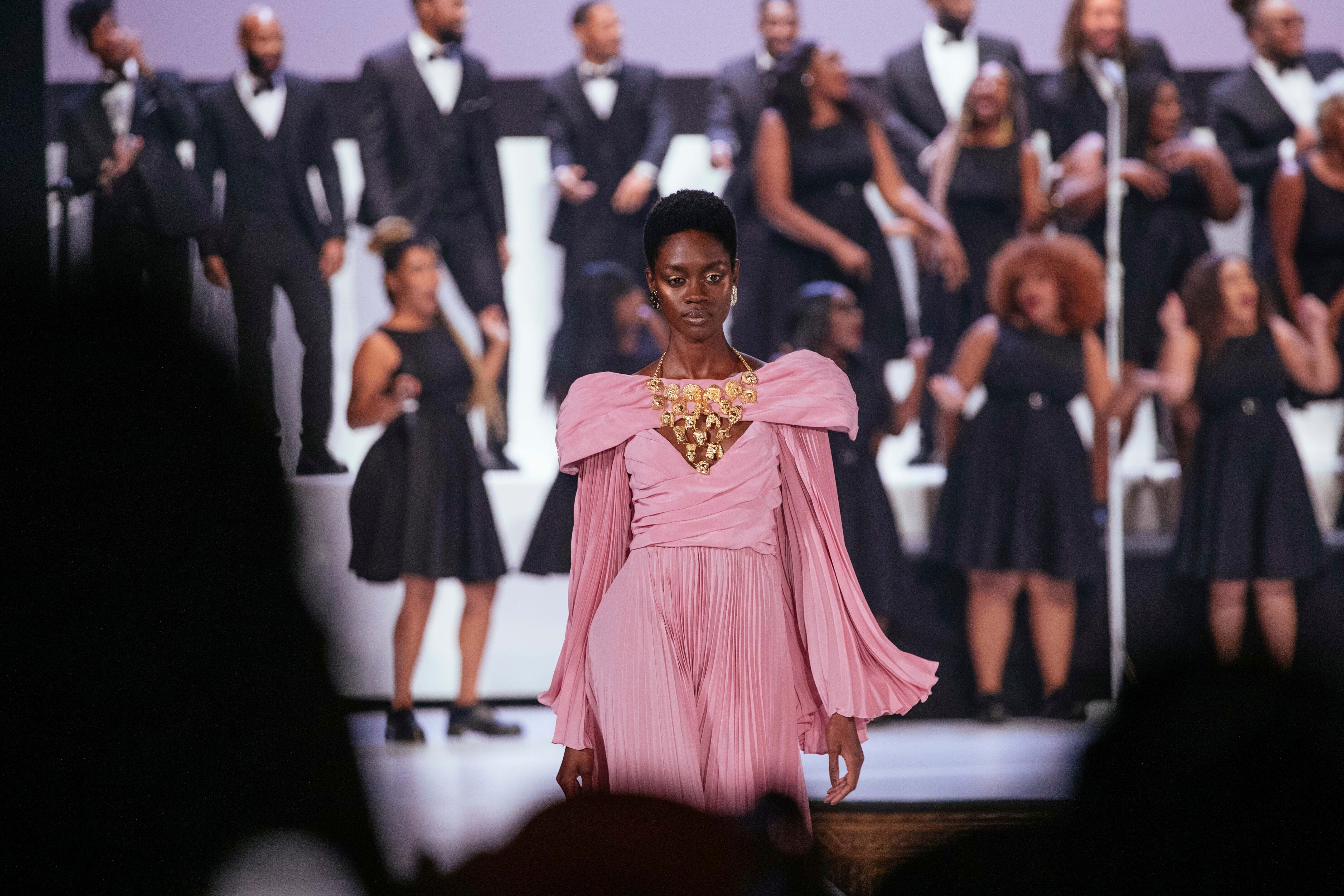 The Pyer Moss collection is modeled during NYFW in 2019.  Kevin Hagen/AP/Shutterstock