Moore From L.A.: 5 Takeaways From a New York Fashion Week Like No Other

Without deep-pocketed investors behind them, it was a testament to the spirit of creativity and survival that so many American designers were able to get it together to show at all. And the problem-solving was inspiring.

They pulled it off!

There were precious few live shows, not a celebrity front row to speak of, and street style was nonexistent, unless you call pulling it together enough to leave the house or connect on Zoom street style. But New York Fashion Week came and went, closing on a high note with Christian Siriano on Thursday — well, sort of, a few stragglers will continue to roll out look books and collections into next week and into October, leaving the future of the when and how of “fashion week” very much in question.

Scheduling wise, it was a bit of a s–t show — having to keep track of two calendars (CFDA and IMG); arranging designer interviews that usually happen easily backstage on Zoom instead, and making sure you see the same colors over Zoom that the designer does (sorry, St. John).

It wasn’t easy remembering not to publish collection photos before they went live on the fashion week platforms (sorry Maisie Wilen). The massive COVID-19 hit to the p.r. business was part of the mayhem, and made journalists appreciate and miss what p.r.s do in the way of outreach and organization that much more.

But it wasn’t all bad.

At last, the CFDA Awards felt forward-thinking, with a record number of Black designers getting recognition — Kerby Jean-Raymond, Telfar and Christopher John Rogers — and sustainability taking the forefront with Gabriela Hearst winning the Womenswear Designer of the Year award. (It’s too bad none of these winners actually showed as part of the week.)

While big names Ralph Lauren, Tory Burch, Michael Kors, Proenza Schouler and Marc Jacobs also stayed away, that made space and time to see and appreciate smaller labels, perhaps giving New York the potential for a new identity as a launchpad. 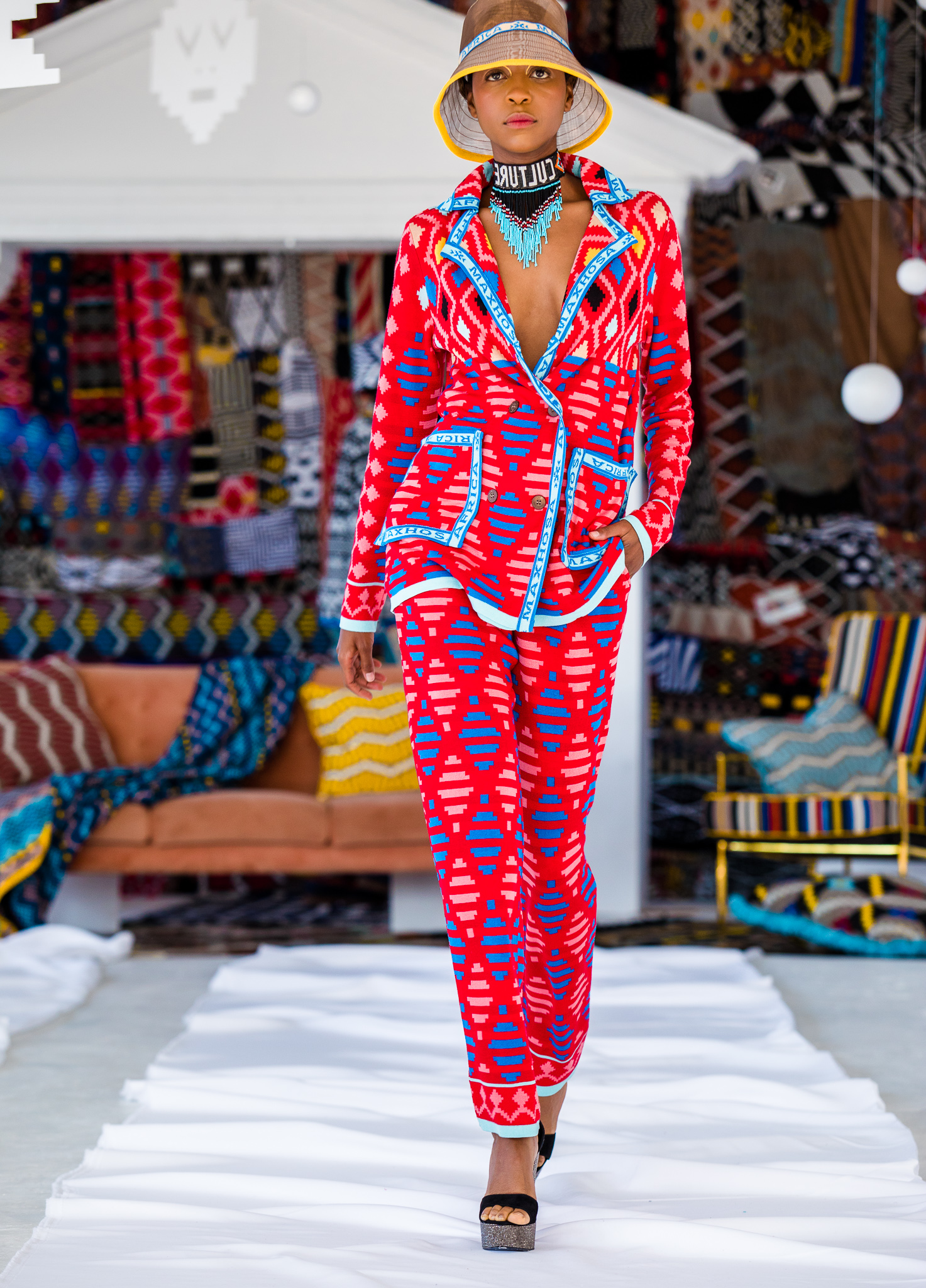 My discoveries included South African brand Maxhosa Africa, whose vibrant Xhosa-inspired knits and patterns seem primed for international expansion and collaborations, and Lavie by Claude Kameni, an emerging red-carpet favorite in L.A. who translated her love of African prints into bold ready-to-wear. And there were many more covered by other WWD editors.

Here are five takeaways from a New York Fashion Week like no other. 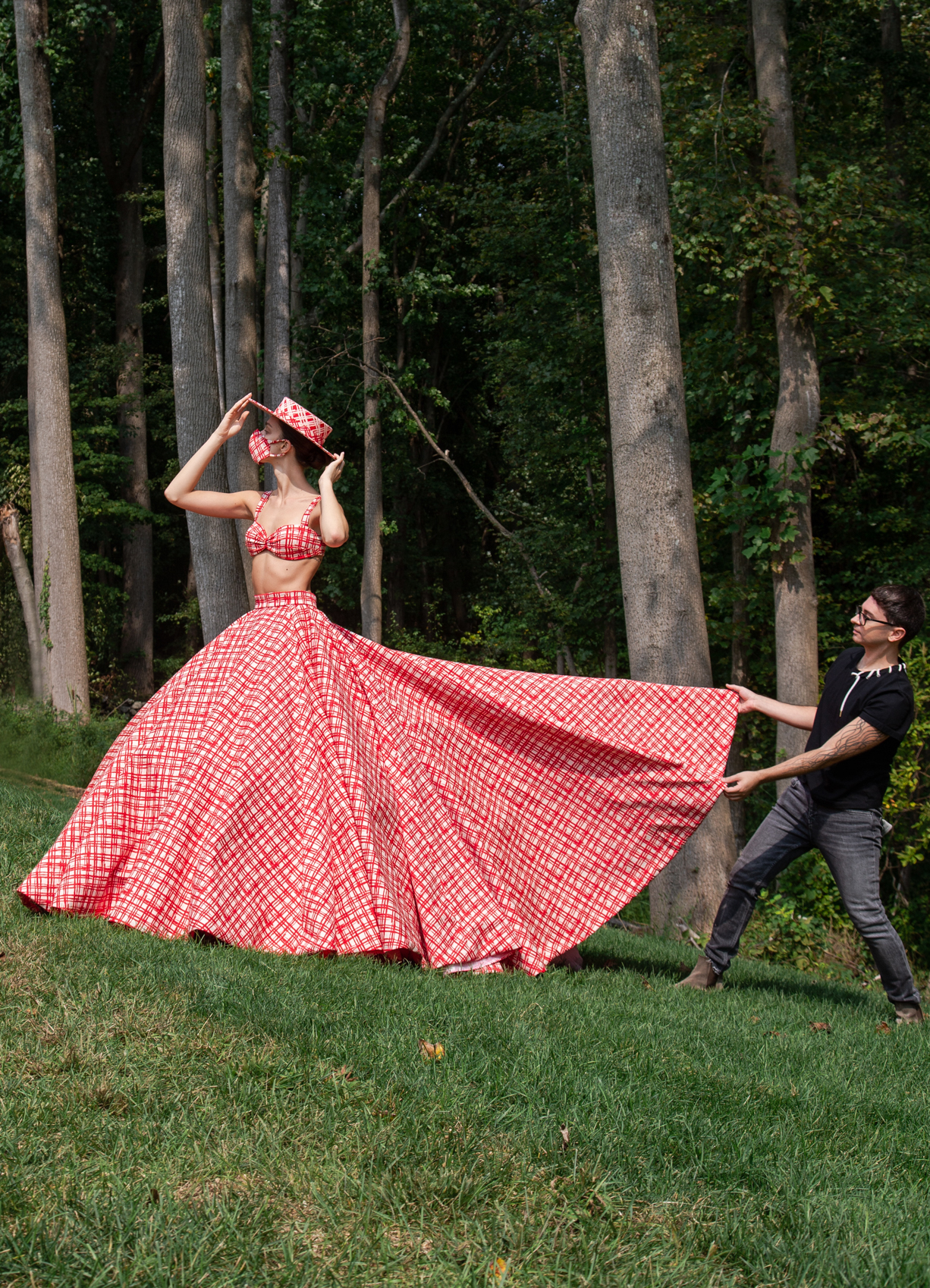 1) Fashion masks are here to stay.

While not every designer put them front-and-center in their presentations, several did, including Alice + Olivia,  Zero + Maria Cornejo, Chromat, Libertine (in toile de Jouy) and Siriano (matched to a ballskirt, naturally), signaling that the accessory is not only good health policy, it’s good for the bottom line. 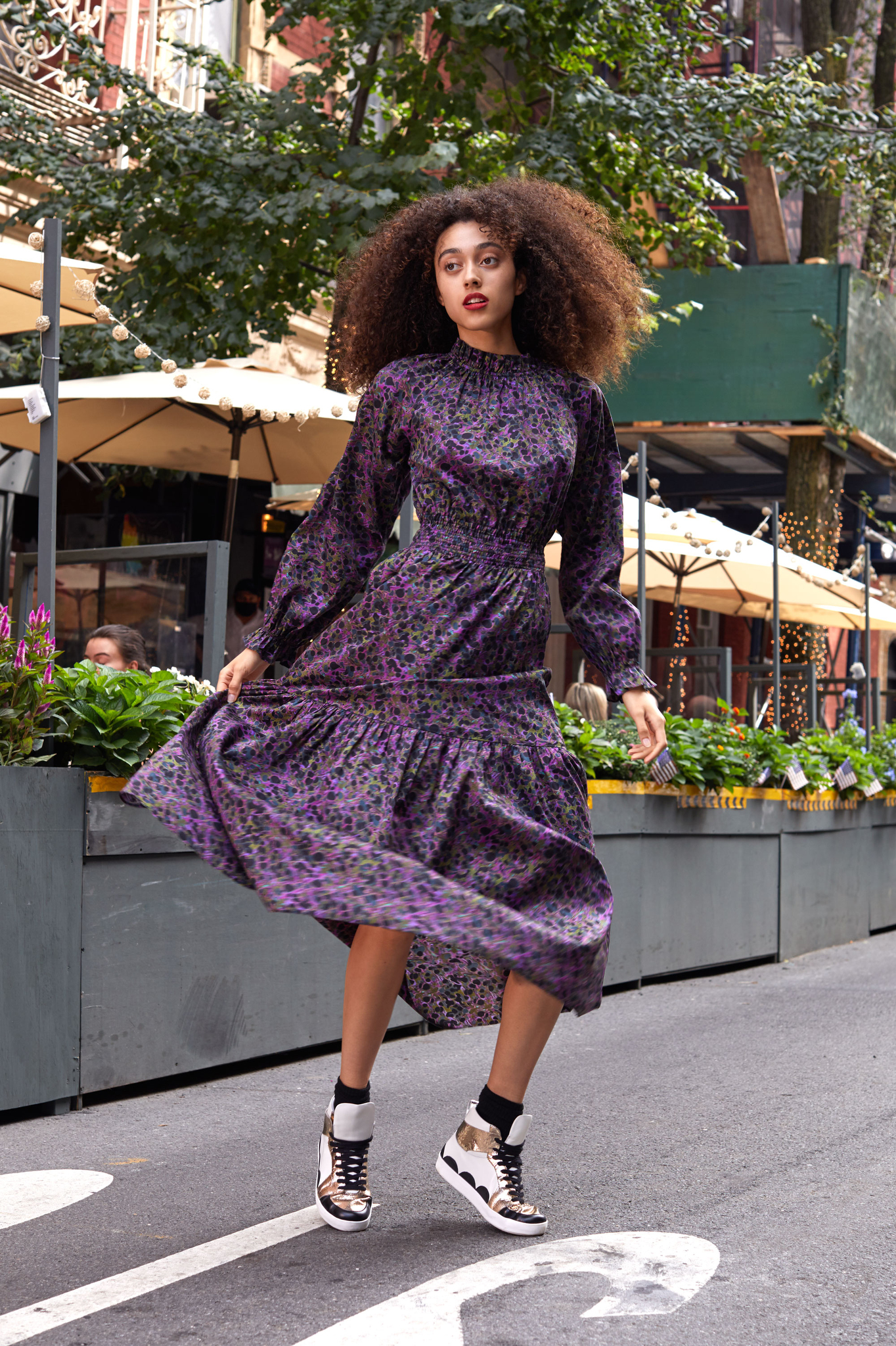 2) New York played a starring role (but so did the ‘burbs).

Cynthia Rowley’s “The Show Must Go On” collection film had models dancing in the West Village streets in front of socially distant diners in support of the city’s struggling small businesses. Ulla Johnson’s moody “Love Letter to New York” film used Roosevelt Island’s picturesque Four Freedoms Park for her audience-less show that was nearly as good as being there. Meanwhile, Alice + Olivia’s Stacey Bendet had a live pop-up dance performance on 14th Street and Ninth Avenue, and Jason Wu created a Tulum-inspired escape among the skyscrapers on the Spring Studios rooftop for his live event.

Just like they did after Hurricane Floyd hit the city during fashion week in 1999, and the tragedy of 9/11, designers paid homage to the resilience of their hometown and trumpeted its ability to bounce back. “It feels like there is a lot of energy,” said Maria Cornejo, pointing out that sometimes losses can be gains. “The big stores have disappeared, but artists are reclaiming the space, and there’s a bit of renewal going on.”

Others hit the road, using their country retreats for film backdrops and collection inspiration, from Hudson, N.Y., where Bibhu Mohapatra filmed his collection at the Olana State Park, to Siriano showing on a runway over the pool in his garden in Westport, Conn., to designers Zooming in from L.A., Capetown and beyond. 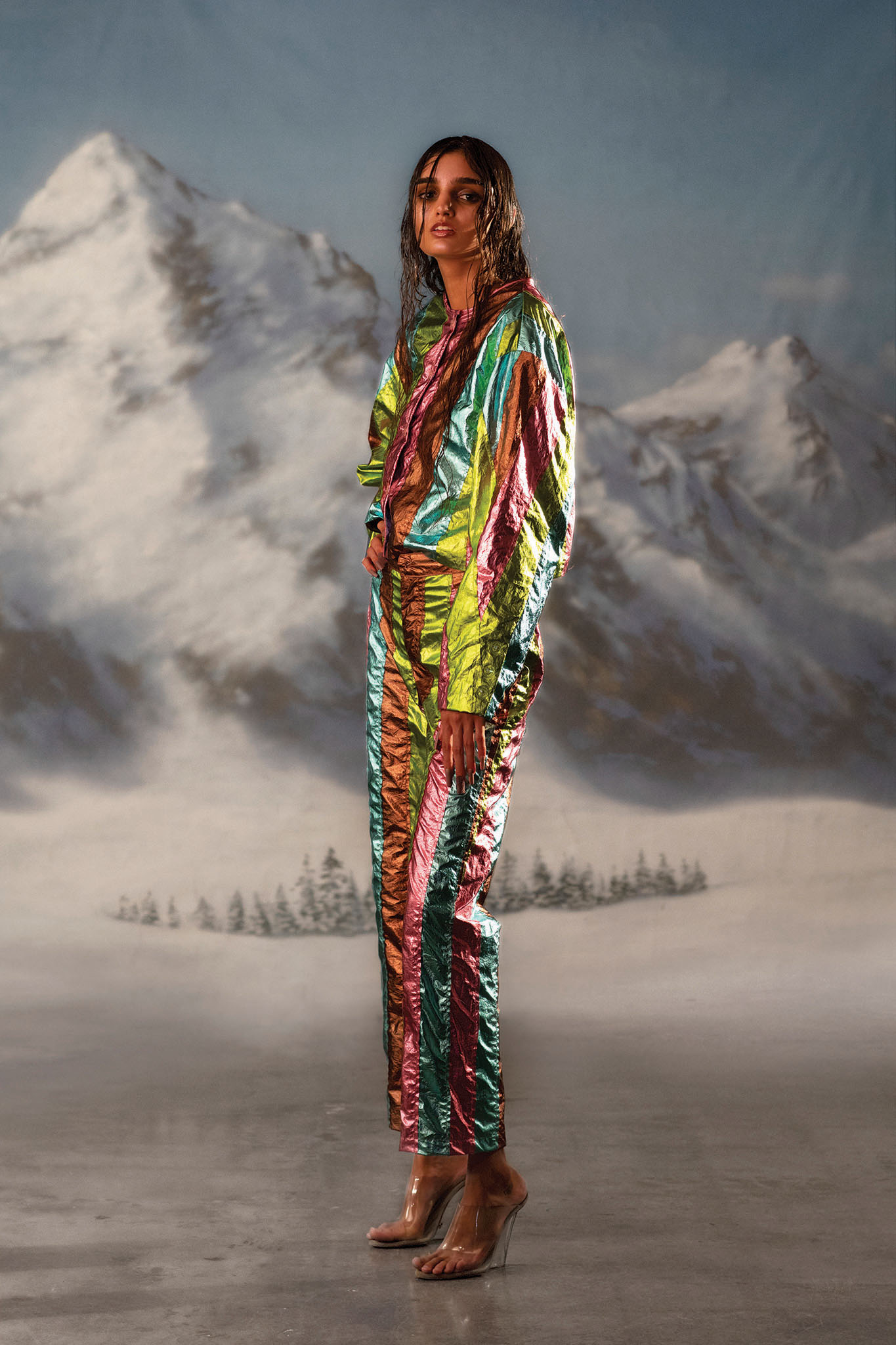 3. There is life beyond sweatpants.

At-home comfortwear is still with us as the pandemic wears on, with almost every designer admitting to some sweatpant-living themselves. Pajama dressing was another through line, while caftans got the designer treatment from Tom Ford, and house dresses the homespun, heartland handle from Anna Sui.

But other designers are ready to move on. Brandon Maxwell leaned into denim for his first capsule collection, and Who Decides War gave men’s jeans an impressive arty spin with overlaid embroidery, sheer underlays, rips, tears and stained-glass motifs.

Trying to convey the human touch was a common refrain. Marina Moscone put an emphasis on craft by adding handweaving, hand-marbling, draping and twisting to her minimalist core, and Conley Averett of Judy Turner broke through with cool, genderless crochet knits.

Tailoring is still fashion-relevant, too (one only had to look as far as the stage of the Democratic National Convention to know that). Up-and-coming designer Ryuhei Oomaru of Overcoat used his innovative construction techniques to bring fluidity to men’s and women’s suiting. And forget the shirt: The newest way to wear a blazer is with a bra or bikini top.

Asymmetric layering, cutouts and sci-fi fabric treatments made the C+Plus Series and Maisie Wilen collections stand out for their sexy dynamism. And don’t underestimate the power of a little color therapy; vivid hues were also a mood lifter for Jason Wu and Claudia Li.

Last but not least on the trend topic: fashion’s Nineties minimalism moment seems to be anything but, with athletic cuts abounding, and Khaite’s slit body-con dresses and sharp-shouldered suits striking a Robert Palmer “Simply Irresistible” vibe. 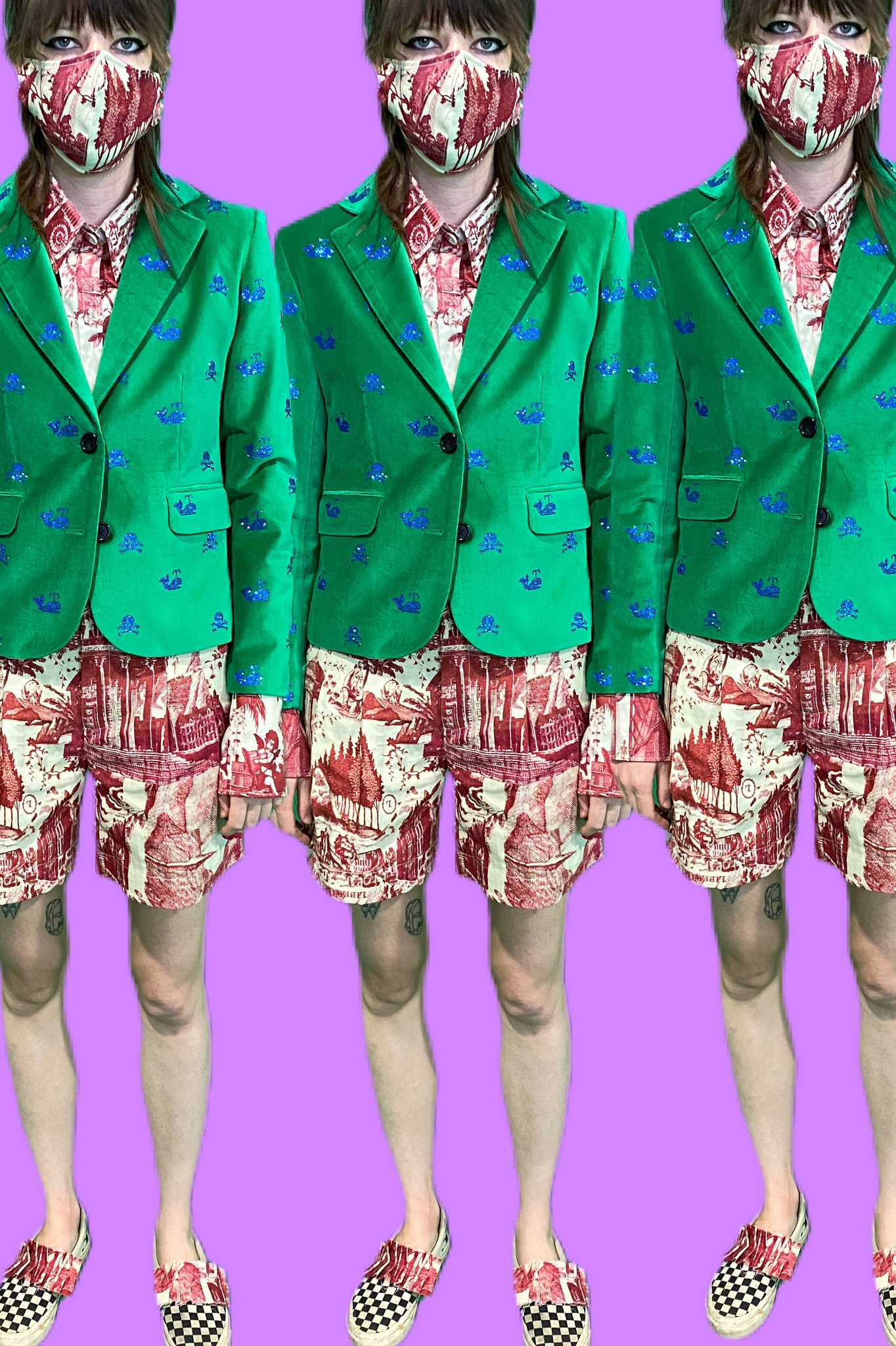 4. Not all fashion films are created equal.

While Tom Ford has directed Oscar-winning Hollywood films, he didn’t choose the format to show his spring 2021 collection. But plenty of others did, to varying effect. Some felt too long (Tadashi Shoji, at nearly 20 minutes, and in slo-mo) and some felt too short (Bibhu Mohapatra, I wanted to see more of the clothes).

Libertine, Collina Strada and Private Policy captured the attention with trippy visuals. Ulla Johnson used 12 cameras to do justice to the sweeping New York vista and intimate fashion handwork. And Brian Wolk and Claude Morais filmed their subjects from a moving car over 26 consecutive nights in Los Angeles for their cool piece “Driven,” which is already winning awards. “We have found films to be a more effective way of getting our message out, not only because of the amount of impressions and how easy they are to share, but because of the number of communities they touch that are not just fashion,” Wolk said.

Meanwhile, Frère designer Davidson Petit-Frère penned a full-on script for his short featuring Emmy-nominated actor Michael K. Williams as a Black James Bond-like protagonist. And he expects to make it into a feature film in 2022 (Watch your back, Tom!) . 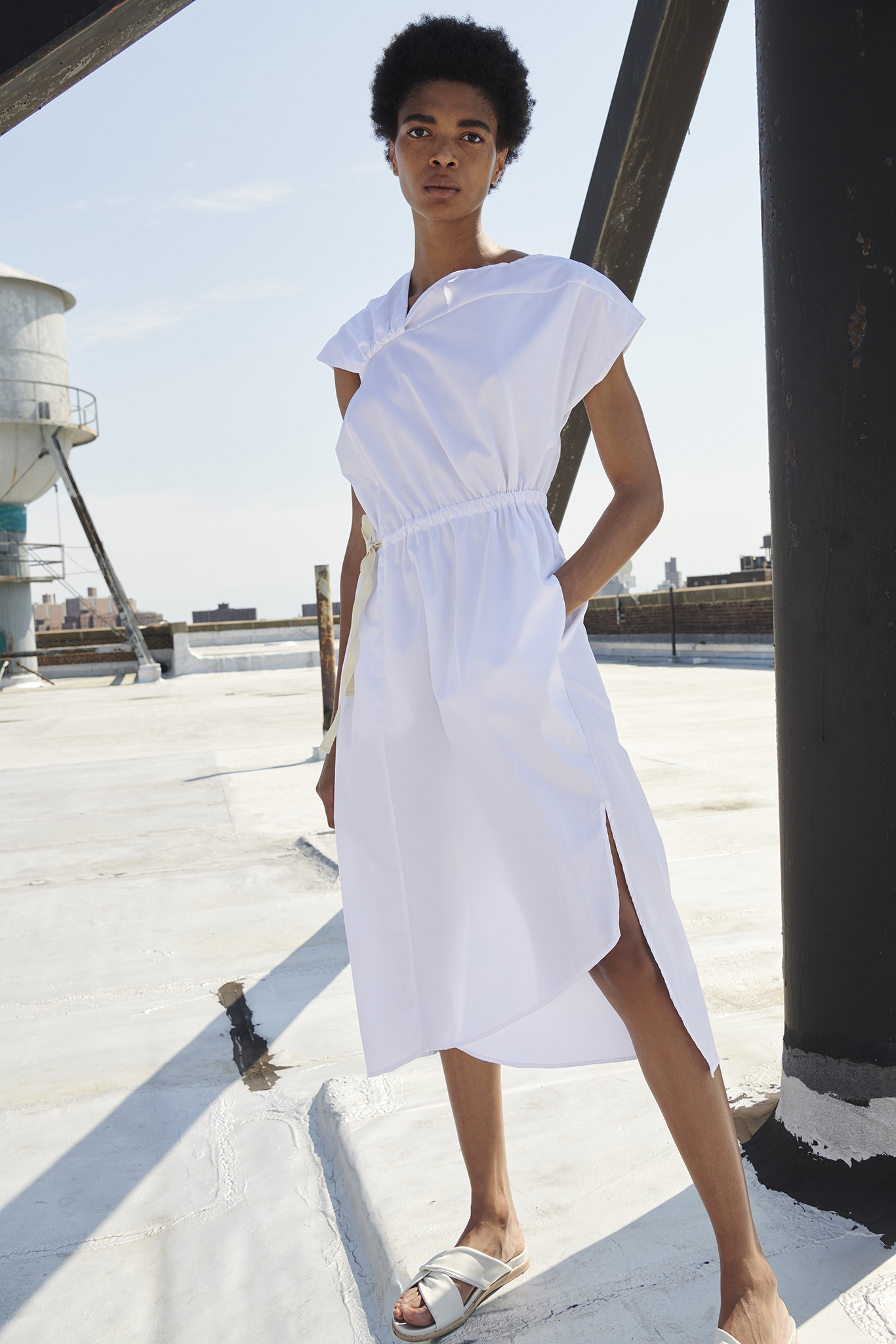 For sure, there was a lot missing in the way of headlining talent, and the week ends with lots of question marks about where fashion week goes from here. But without deep-pocketed investors behind them, it was a testament to the spirit of creativity and survival that so many American designers were able to get it together to show at all. And the ingenuity and problem-solving was inspiring, from Mohapatra using studio scraps for dazzling embroideries, to Imitation of Christ making an entire upcycled collection from thrifted pieces and sending it straight to the The Real Real to bring attention to the climate catastrophe.

Certainly, in many of the collections, less was more. Fewer looks meant more focus and more real clothes, which besides feeling right for the moment, served as a reminder of what designers here have historically done best — simple and sporty, but make it fashion.