HOSTING ON THE RIGHT: Betsy DeVos, chairman of Michigan’s Republican State Committee, hosted a number of cocktail receptions and benefits during the convention aboard her family’s yacht, the Windquest, docked at the Chelsea... 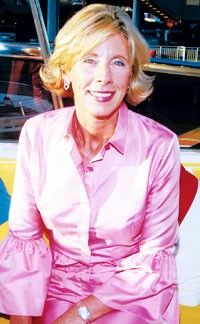 HOSTING ON THE RIGHT: Betsy DeVos, chairman of Michigan’s Republican State Committee, hosted a number of cocktail receptions and benefits during the convention aboard her family’s yacht, the Windquest, docked at the Chelsea Piers.

While many of her guests were familiar with the DeVoses’ fortunes, derived from the direct sales company Amway, and their largess toward Republican interests, some were surprised to discover DeVos’ secret weapon is a personal fashion connection. DeVos’ sister-in-law is Pamella DeVos, designer of the Pamella Roland label. Wearing a pink satin blouse and pants from her sister-in-law, she said she’s a fan of Pamella’s designs and enjoyed working them into her convention-week wardrobe.

“I wouldn’t normally wear something like this for a business event, but this was a more casual reception,” she said onboard the Windquest on Wednesday night as she received delegates from her home state.

DeVos had just returned from a scavenger hunt through Midtown, in which the delegates raced from Carnegie Hall to Rockefeller Center to the Diamond District to the TKTS booth in Times Square, snapping Polaroids along the way, and she planned to change again before heading back to Madison Square Garden.

“I always figure coming to New York, you’re safe with black,” she said. “Packing for this was a lot more cumbersome than most trips I take, because there’s a lot of changes involved.”

PLANET SCHWARZENEGGER: California Gov. Arnold Schwarzenegger followed up his convention appearance Tuesday with a luncheon at Planet Hollywood on 45th Street and Broadway on Thursday.

The governator was decked out in a tan suit to go with his California tan and stopped on the red carpet to schmooze with a gaggle of kids, one of whom rolled up the sleeves of his Planet Hollywood T-shirt to show off his muscles to the former Mr. Olympia. Schwarzenegger encouraged the young bodybuilder before heading into the restaurant to meet with California delegates.

Schwarzenegger stayed on the red carpet long enough to get through the Beach Boys’ “Surfin’ U.S.A.,” which at one point sings of “a bushy bushy blonde hairdo,” although the song preceded the nickname by many years.

Prior to Schwarzenegger’s arrival, when the California press was getting the prime spots for the red carpet appearance, the police removed a reporter from the New York Sun who insisted on being let in with them. Ira Stoll, managing editor for the Sun, confirmed that a San Francisco-based reporter working for the paper was briefly detained and then released.

SOUTHERN COMFORT: You could almost smell the magnolia trees. A little bit of the genteel South found its way to Hell’s Kitchen Wednesday night as some of its biggest politicos gathered at Splashlight Studios for “My South,” a party thrown by Mississippi Congressman Chip Pickering’s lovely wife, Leisha.

“I think there’s still a negative stereotype of the South, that we’re uneducated and backwards,” said Leisha Pickering, herself a graduate of Ole Miss. A lover of art, literature and music, and a budding pastry chef, she pulled together some of the South’s best in those fields, including painter William Pullman, chef Robert St. John and the Nashville Bluegrass Band, among many others.

Ladies dressed up in their feminine best, in colorful florals, pouffy skirts and strappy sandals. There were very few all-black looks — and those were courtesy of New York media types, bien sûr.

Leisha Pickering, who wore a charming floral halter with slim pants, took the opportunity of being in Manhattan for the convention to check out the local shopping, including Rockefeller Center’s J. Crew, where she picked up a pair of suede boots and contemplated a pink cashmere V-neck sweater and a blue cable-knit. She also visited Barneys New York for the first time. “It was a wonderful experience.”

But what she was really looking for was a pair of pointy shoes. “Everybody wears really pointy shoes here,” she noticed. “So I wanted to get some for my event. And it was so funny, because everyone at the party said, ‘Oh, you’re so New York.’”