KISSINGER vs. FRANKEN: Henry Kissinger ran into his doppelgänger Monday night — in the shape of comedian and outspoken progressive firebrand Al Franken. “I do you a lot on the show,” the Air America Radio host told... 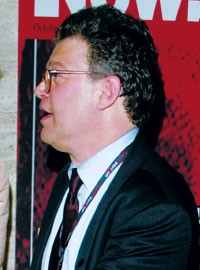 KISSINGER vs. FRANKEN: Henry Kissinger ran into his doppelgänger Monday night — in the shape of comedian and outspoken progressive firebrand Al Franken. “I do you a lot on the show,” the Air America Radio host told the former secretary of state in the Nixon and Ford administrations at Newsweek’s party at the Four Seasons.

“Your son, David, says I do you the best,” added Franken.

“If you practice with Ted Koppel a little bit,” an amused Kissinger shot back as Franken leaned in and lowered his voice into a slow, accented baritone.

Even as the first night of the convention was about to start at Madison Square Garden, Commerce Secretary Don Evans stopped by, bumping into Robert Mosbacher, who held the post in the first Bush administration (and whose former wife, Georgette, swung by, too, after holding parties of her own for GOP delegates earlier in the day). A latecomer was Oscar de la Renta, who attracted a pack of admirers, including New Jersey delegate Lauren Vernon, whose fringe in her Etro scarf became tangled in a button on de la Renta’s suit cuff.

BATTLE OF THE FIRST LADIES: It was hard to tell who got the bigger applause at a lunch Tuesday for First Lady Laura Bush: the guest of honor or her mother-in-law, former First Lady Barbara Bush.

After the crowd of about 1,100 Republican women at the Marriott Marquis settled down, Bush twin Jenna set some family history straight as she explained her love of strong women. While her grandmother is known as “Barbara, the enforcer,” Jenna said, “In our family, I’m known as ‘Barbara’s revenge on George.’”

Jenna was joined at the podium by her twin, Barbara, who told the story of their mom leading a conga line through their house for their first-grade birthday party. The First Lady, in a turquoise suit, stuck primarily to a stump speech, a warm-up for her convention delivery Tuesday night, entitled “Fulfilling America’s Promise: Building a Safer World and a More Hopeful America,” according to advance excerpts released by the RNC.

MORE MO, PLEASE: It’s rare that CNN’s Larry King gets stumped. But when he took one look at Mo Rocca’s getup Monday night at the convention wrap-up roundtable, all King could manage was, “Mo Rocca, our roving reporter, TV personality with ‘The Today Show’ and a man in a toga.”

Actually, Rocca wore a kurta, the loose, knee-length tunic traditional in Indian men’s wear. Chic ladies have appropriated the look with embroidered yokes, but Rocca wore it with Burberry pants and handmade shoes from Greece.

Later in the show, which included former New York governor Mario Cuomo and MTV’s Gideon Yago, King asked the snarky reporter to explain his clothing choice. “I’m an anarchist. Anarchists are the protesters that have been in the protester doghouse for years,” said Rocca, who’s brought much-needed levity to convention coverage. “I mean, everyone can agree that they don’t like anarchists. But I thought I’d dress up as one, a New York anarchist, a SoHo anarchist.”

THOMPSON’S ROAR: Was Howard Dean in the house? At the Susan G. Komen Breast Cancer Foundation party Monday night at Bergdorf Goodman, Secretary of Health and Human Services Tommy Thompson let out a vocal pitch for President Bush’s reelection that sounded like a war cry reminiscent of Dean’s candidacy-ending roar. Maybe it was just the humidity.

Meanwhile, actress Bo Derek, standing near the Verdura jewelry display, said the security lines are slowing her down. “They schedule all these interviews and they call and say, ‘Where are you?’ And I say, ‘I’m in line,’” Derek told a gaggle of fans.

At the party, where the Emilio Pucci scarf display was turned into a cheese buffet, the foundation received a $100,000 check from corporate donors.

INTREPID SPENDING: Democrats took some heat during last month’s convention in Boston for not kick-starting the local economy. And if Virginia Sen. George Allen is any indication, Republicans won’t be doing much better for the New York economy.

At a party Sunday night for GOP senators aboard the USS Intrepid, Allen said, “I certainly buy my tobacco where the taxes are less. I support my Virginia economy first, although I can’t vouch for my wife. My daughter said, ‘New York has good shopping.’ She stayed home.”

While she’s at field hockey practice, he may pick up the slack. “I suppose if a store is open past midnight, we’ll be spending cash,” Allen said.

After all, Tuesday kicks off New York City’s tax abatement week, when apparel and footwear costing less than $100 won’t be taxed. Sen. Norm Coleman of Minnesota, who hails from Brooklyn, said he’d already bought three no-wrinkle shirts at Brooks Brothers earlier in the day. The RNC co-host said that this week’s itinerary should allow people to shop a bit, since it will take them to various neighborhoods.

His wife, Laurie, said she planned to do some damage in the stores. Last week, the senator’s wife caused a stir by being photographed wearing lingerie for an article about her acting and modeling career in The Washington Post.

Dressed in a Ruth strapless black dress with a lavender bow, she said on Monday, “I’m saving my Prada for Wednesday night — for Norm’s party.”

Wearing a pair of shoes he bought in New York five years ago, Sen. John Warner, chairman of the Armed Services Committee, said he planned to drop some cash. “I’m not the biggest shopper in the world, but I plan to pick up a present for my wife,” Jeanne, said Warner, who was once married to Elizabeth Taylor. “She couldn’t come at the last minute because she had to work. Someone has to support me.”

Also on hand was a local band of USO singers who paid a vocal tribute to The Andrews Sisters. Among them was something of a USO celebrity in her own right, Lynelle Johnson, who bears the title “Miss USO 2004,” which is no meager feat. “I had to send in a letter and be interviewed by a panel of 30 judges and then sing the National Anthem,” said Johnson. “It’s been an incredible experience so far this year.”

BLACK, WHITE AND READ: Arthur O. Sulzberger Jr.’s mixer Monday night was not the place for elephant pins or W pennants. Instead of toasting the Republican National Convention, the nonpartisan gathering saluted the city hosting the affair.

Chelsea Piers’ chairman Roland Betts, a friend of President Bush’s since their days at Yale, said, “It’s very important to me that this thing goes well. He’s excited about it. I know that might shock people. He really likes New York, his wife loves New York and his daughters love New York. They’re the toast of the town — so to speak.”

Betts said he and his wife will be in the Bush family’s suite when the president accepts his nomination Thursday night. “Lois and I were sitting on the couch when he got nominated the first time,” he said. “He wants to make sure we’re there again.”

Democrat Cuomo hadn’t dropped by his son-in-law Kenneth Cole’s party earlier. “I didn’t know he had a party,” he said. “I guess I don’t dress well enough.”

Bill Keller, executive editor of the Times, said, “In general, the media has a harder time portraying conservatives and Republicans in all their dimensions. It’s a little bit tempting to write about them in code and stereotypes.”

BILLIONAIRES’ BALL: Billionaires for Bush, one of the wittier groups protesting the Republicans while they’re in town, were ballroom dancing their way into the media spotlight at Grand Central Terminal Tuesday afternoon.

The gals were decked out in full-length gowns, tiaras, evening gloves and sometimes sneakers, while for the guys, it was tuxes and top hats. Commuters at the station paused for a moment before continuing on their way past the ragtag group dancing to no music. Police officers milled nearby, but didn’t disrupt the ball.

The group’s message, along with their appearance, is tongue-in-cheek. One of the Billionaires had a sign that read “2 million jobs lost… It’s a start” while a flyer handed out derided the Democratic nominee, Massachusetts Sen. John Kerry: “He’s a flip-flopper. Clean air? Clean water? Which is it, John.”

N. Hera Dafortune who, when she’s not with the Billionaires, is Fordham University economics student Erum Naqvi, said the satire gets through to people more than shouting. “You just look like an angry liberal [shouting],” she said.

“With the way the media is now, people don’t watch TV to be informed, they’d rather be entertained,” she said. “What we do, people are amused by it and they pay attention.”