THE DOG HOUSE: The Republicans are playing catch with all sorts of dogs of war at the convention, but there was one that just wasn’t biting. Triumph the Insult Comic Dog, of “Late Night with Conan O’Brien” fame, made his... 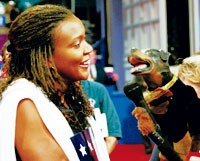 THE DOG HOUSE: The Republicans are playing catch with all sorts of dogs of war at the convention, but there was one that just wasn’t biting. Triumph the Insult Comic Dog, of “Late Night with Conan O’Brien” fame, made his way around the floor Tuesday night, amusing older Republicans and terrorizing the younger ones.

The talk of the night was how charming Jenna and Barbara Bush were, speaking on behalf of their father, the President, and letting everyone in on the family’s secret pet names for each other. But when asked how the twins performed onstage, Triumph said, “They were great. Mary-Kate was very dignified about what happened last summer. She didn’t even mention the summer, which was very impressive.”

And while many size up which set of daughters — the Bushes or Alexandra and Vanessa Kerry — are putting on cuter, more stylish election game faces, Triumph isn’t easily impressed. “Well, I have a different perspective because I look at their butts, you know?”

BE PREPARED: Just like her husband, Senate Majority Leader Bill Frist, Karyn Frist understands that everything has its place.

Before heading to New York for the convention, her wardrobe was organized and somewhat replenished. Wearing a silver Michael Kors dress suit at Tuesday night’s National Distilled Spirits-sponsored bash at the New York Yacht Club, the Tennessee senator’s wife said, “Before we left, I knew which day I would wear which outfit. They only give us 20 minutes to change our clothes.”

Her suitcase stowed away a few pieces from her favorite designer, Kors, as well as a few from Ralph Rucci, whose workmanship earned points with Frist. “He’s the only American designer that shows on the runway in Paris,” she added accurately.

But shopping hasn’t been an option this week. “I’ve been in Barneys and Saks for events,” she said. “Unfortunately, I wasn’t able to shop.”

Her husband doesn’t offer much input in the fashion department, but “he is always very supportive of everything I do,” Frist said.

ROCKING FRENCH CONNECTION: Actress Angie Harmon and her husband, former NFL star Jason Sehorn, are making the political rounds. Having addressed the RNC Monday night, the pair teamed up with Rock the Vote for a party at French Connection’s SoHo store to encourage people to go to the polls in November.

“The only thing we can really do is vote,” said Sehorn. “You can’t change anything by talking.”

Sehorn maintained they were just trying to encourage people to vote and not pushing an agenda, despite their vocal support of President Bush.

The Rock the Vote message seems to have gotten through to his wife, who said she would go home to Texas and register to vote right away. As for her political choices, Harmon, who wore a black-and-white floral-print top, black pants and diamond earrings, said, “Republicans are just more laid back.”