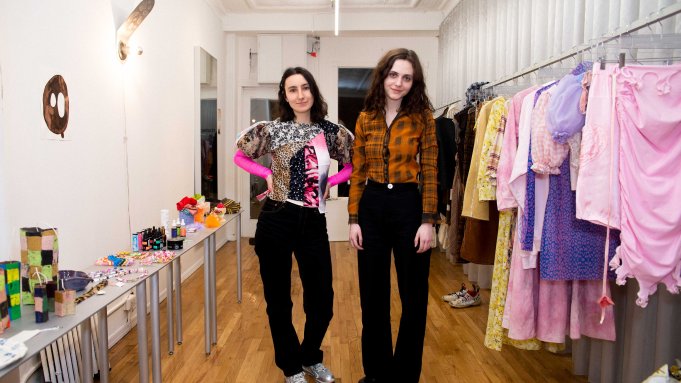 They say it’s a dead breed — the kind of New York boutique that helped sustain a creative community of makers and thinkers throughout the Eighties and Nineties selling a curious array of one-off clothing, accessories and knickknacks likely made on the floor of a cramped studio apartment.

Filling quiet corners of up-and-coming artistic neighborhoods, these stores often represented more than just commerce — they were community projects, giving creative refuge and a source of income to the city’s underground design community. And thus, the small New York labels whose experimental, hand-made designs forged a crucial connection between shoppers and the city’s creative bohemia evaporated along with them.

Rising rents and the increased cost of living may have suppressed a generation of New York creatives — as many designers resigned themselves to a nine-to-five career, numbing their appetite for an artistic side hustle and putting a damper on the number of small labels launched in Manhattan. But two TriBeCa kids are hoping to revive the onetime New York retail tradition — creating a roving gallery space highlighting the kind of scrappy fashions for which the city was once known.

Café Forgot, a store concept founded in 2017 by Vita Haas and Lucy Weisner (26 and 25, respectively), has positioned itself as the heir apparent of experimental fashion retail in New York. The pop-up enterprise, which marked its newest iteration on Feb. 1, has arrived in the nick of time — by the year’s end, Opening Ceremony will have also disappeared from the city’s map, leaving upstart designers with few reputable venues here in which to introduce their brands.

The project launched on the scene in a post-Eckhaus Latta New York, where deconstruction and anti-establishment again became the m.o. for new designers — many of whom lacked the cash or simply the desire to start a brand in the traditional sense. Both Haas and Weisner grew up surrounded by artistic types who spent their spare time enmeshed in various art practices, some of which included wearable pieces of clothing and jewelry. Missing, however, was a place to sell them.

Weisner recalled a time, “When I was younger in New York, there were weird stores you could just find the craziest clothes. I just felt like that has been slowly disappearing for a while and we wanted to create a space like that. So many of our friends are making things and not producing a whole collection for financial reasons or time.”

Haas, who navigated her post-collegiate years with money jobs at stores like Pleats Please and Morgan Le Fay, approached their project from the opinion of, “a very romantic idea of a store in the traditional sense. I have always loved physical shops.”

The store has since gone on to gain repute as a springboard for new talent, with Haas and Weisner now fielding direct messages and e-mails from young designers on a daily basis. The duo took it as a sign to find a more permanent home — in December they signed a lease at 627 East 6th Street where they plan to reside for at least the next year.

Café Forgot, or “The Café” as it is known to insiders, harks back to New York’s quirky boutiques of yesteryear, offering shoppers the joy of discovery with products best appreciated up close rather than online.

With stark-white walls and neon track lighting — one wall bearing a color-coded rack of handmade clothes, the other set with a sparse shelf to exhibit accessories, home goods and beauty products — the narrow space is arranged more like a gallery than a fashion boutique.

Café Forgot champions a new kind of arts and crafts movement offering joyous escapism to a cynical, student loan-beleaguered generation — doily-embellished tops by Kristin Mallison, knit bags by Beepy Bella, spray-painted dresses by Gogo Graham and kitschy jewelry by Daisy Chains. Most of it is by no means technically superior, sturdy or well-made — but what the assortment lacks in quality is made up for with originality and experimentation.

While optimistic about the store’s mission, Haas and Weisner are well aware of the challenges retail presently faces. Even in its more permanent location, Café Forgot will maintain an ephemeral model. Its East Village space operates as a store every other month and is sublet to community groups, fashion brands and budding gallerists in the time in between — providing Haas and Weisner with an injection of cash while also creating a sense of urgency for the consumer.

“We are figuring out a different way to survive, so we rent the space out to different people in the off month because then it’s not all on us,” said Haas.

“The whole model arose because we didn’t have any money to start out,” Weisner conceded. “There is so much initial overhead with a lot of retail. What is unique about Café is that a lot of the pieces you can’t find anywhere else so you need to come into the store. Just having the temporary model incentivizes people to come in — I think in that way we operate similar to a gallery.”

They hope to avoid the monotony of staying in a permanent space for too long. “We have ideas to travel to do something in L.A. and maybe Paris. The kind of feeling like you can’t find these things anywhere else makes it feel unique — there isn’t competition necessarily with other retailers or online,” Haas said.

Lucky for her and Weisner, there is a new appreciation for fashion that is rough around the edges, delicate and aesthetically connected to a human hand, this following a decade’s worth of picture-perfect, mass-produced clothes that were meant to be consumed and viewed online.

“I think what aligns a lot of the people we work with is that they are very much conceptually working in the same space,” said Weisner. “They make clothes but it’s also part of their art practice; there are a lot of different mediums and this is one of the things they happen to be doing.”

The store has now cultivated enough of a name to embark on another great New York tradition: Merch. In December, Haas and Weisner released a small run of Café Forgot socks and hand-embroidered underwear. They are now working on a fragrance, as well as an e-commerce site for higher-priced designs, thus widening their pool of potential customers.

Said Haas: “We just want people to continue making really interesting work, we hope that we can continue doing this as long as possible.”

Weisner was hopeful: “I want there to be more visibility that this kind of fashion still exists in New York. I still feel very optimistic that not everything is over.”