As fashion week got moving, Kenneth Cole went sporty and practical with a Seventies touch, while Richard Tyler sped down the runway with sky-high tailored looks and Nicole Miller headed North for inspiration. 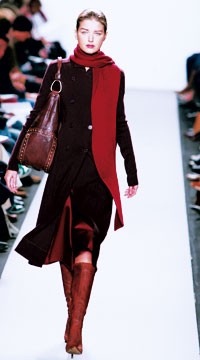 As fashion week got moving, Kenneth Cole went sporty and practical with a Seventies touch, while Richard Tyler sped down the runway with sky-high tailored looks and Nicole Miller headed North for inspiration.

Kenneth Cole: Lights, camera, humanitarian action. As usual, Kenneth Cole kicked off his runway presentation with a call to conscientious arms. This time, his video vignette focused on the country’s homeless. Cole had comedian Mario Cantone — best known as Charlotte’s irritating, persnickety sidekick on “Sex and the City” — playing at salesman, bullying shoppers into donating their coats to the homeless. “Get with the program, bitch!” he yelled at one hapless man trying on jackets who eventually lost his own to Cole’s charity.

While Cole’s altruistic side urged his audience to give coats away, on the runway, his businessman counterpart provided ample alternatives to fill those newly empty spots in the closet. Donated one of those passé but oh-so-warm puffy jackets? Replace it with one of Cole’s pared-down duffel coats in stone, plum or muted green, or maybe a long, maroon peacoat.

Indeed, a pulled-together, sporty attitude defined one of Cole’s strongest collections to date, filled with appealing, practical looks for women and men. To wit — perhaps to highlight the versatility of the clothes — toward the end of the show, Harry Belafonte appeared seemingly out of nowhere, as dashing as any boy model, if way out of context. But no matter. This collection felt more resolved and confident than any Cole has previously shown.

He kept to clean, unfussy lines and a mostly dark palette, infusing earthy neutrals with doses of deep blue, green and plum, as in the thin emerald turtleneck topping a slate pouf skirt. The knits went two ways: fine-gauge and graceful over liquid skirts or ultracozy, worn with long, louche pants. Throughout, the clothes looked smartly classic with a hint of the Seventies, less in proportion than in polish. In fact, some pieces more than whispered certain references, most notably Calvin Klein, then and now. Case in point: the jersey dresses, colorblocked by day, monotone by night. But those too-obvious moments aside, Cole delivered the roots of what could develop into a distinctive, ongoing aesthetic.

Nicole Miller Signature: Nicole Miller may have abandoned the Celtic priestess that served as her muse for spring, but she isn’t out of the Dark Ages yet. Rather, she caught the first longboat off Britannia’s shores and headed toward the land of the Vikings, embracing a new muse, the Old Norse Valkyrie. If that gal sounds like a peculiar source of inspiration, she was, and she made for a peculiar collection. As with any storybook motif, a theme is what you do with it. When Miller approached her operatic saga with an un-Wagnerian light touch, the clothes were often terrific. To that end, flowing silk dresses printed with Viking ships were sweet. And she worked warrior-esque beading in diverse ways, as shield-shaped insets on the side of an olive silk gown and as playful glitz on colorful shearlings.

But the designer went overboard with tons of heavy metal, in for example, a dress made of copper threads with ruching that added so much girth, it might befit the rotund Brunhilde herself. And that’s not a look to which modern girls aspire.

Richard Tyler Couture and the Delta Uniform Collection: It was another kind of runway for Richard Tyler this season. To start with, the terrific uniforms he designed for Delta Airlines flight attendants came down the catwalk in droves, ultimately overshadowing his gowns in number and range. Should all of those looks — and their levels of tailoring — actually end up at the terminals and in the air, Delta will have some seriously chic crews. And sexy to boot, given the designer’s high-glam, power-babe sensibility. Sure, he gave a nod to jaunty sportif with a navy cardigan over a crisp, red-trimmed white shirt and navy pants. But more often, he went for authoritative sizzle in curvy navy dresses or stretch wool skirts suited to perfectly shaped jackets. And as for those hot red taffeta dresses, fasten your seat belts.

For his own collection, Tyler showed only a few additional tailored looks, alluring suits in that svelte Sky Miles spirit. He preferred to focus on evening. Of course, his lineup of gowns included some beauties, especially the fluid, low-back silk jerseys. Yet with the overall emphasis so clearly on Delta, Tyler’s own line seemed to get secondary consideration, which left you wanting more.

Hollywould: Good things come in small packages. That would be the main lesson to take home from Holly Dunlap’s first-ever ready-to-wear show. The wicked humor and sharp sense of camp that have made Dunlap’s shoes and bags such a hit translated poorly to clothes. It was as if the designer starred in a movie called, “Honey, I Blew Up the Accessories,” not taking into account that a modicum of restraint, perhaps not needed for a shoe, is necessary for a coat. Considering that the show’s offerings approximated the gaudy glitz of a high-end Slavic call girl, its theme of “From Russia With Love” lent itself to a slew of crude jokes. If Dunlap chooses to continue with rtw, she would do well to rein in the ostentation. And while she’s at it, she should find a better factory to produce the samples. Or focus on the fun accessories that everybody loves so much.