Newcomers Break Into the Game

A fresh crop of brands is looking for space in the $16.2 billion women's activewear arena dominated by a few global players.

By Melanie Kletter and Rebecca Kleinman on March 30, 2006
View Slideshow 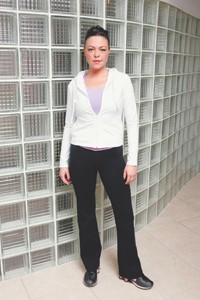 NEW YORK — A fresh crop of brands is looking for space in the $16.2 billion women’s activewear arena.

While the sector is dominated by global players such as Nike and Adidas, and chain stores like The Sports Authority and Foot Locker, small and newer labels are searching for space in alternate venues, including spas, yoga studios and health clubs, all of which have been building their apparel businesses. Health club Equinox Fitness, for example, has 33 boutiques stocking fashion brands such as Michael Stars and Velvet alongside Adidas, Sugoi and other activewear labels.

Many of the newcomers are also designed as athletic leisure brands that can transition for activities outside of the gym. The sector as a whole has been on an upward trend. Wholesale shipments of sports apparel rose by 9 percent to $26.1 billion in 2005, according to the Sporting Goods Manufacturers Association.

“What’s significant is that consumers purchased more units of sports apparel and paid more for them,” the SGMA said in a report on 2005 sales.

Here, a roundup of some new and relaunched labels from around the U.S. joining the action this season.

Amma
Women’s activewear label Amma is being revived for spring under new ownership.

The brand name was bought late last year by garment industry veterans Richard Cohen and Dennis Spitalnick. They acquired the label for about $1 million as part of an asset purchase from Jorge Santos, who had run the company out of Miami for about six years until last spring. Cohen and Spitalnick have set up a new company, Derian Apparel, to oversee Amma and have updated the brand with new silhouettes and styles.

“This line is designed now for an upscale and sophisticated customer,” Cohen said. “It’s yoga-inspired, but can be worn for a variety of activities.”

The line has a clean look and features a few silhouettes that are available in different colors. There are about 18 items in the initial spring collection, including tank tops and zip-up jackets in bright colors such as pink, purple and teal.

The bottoms are available primarily in black and there are a few different bodies. The line ranges in wholesale price from about $22 for some tank tops to bottoms for $32 to $35 and jackets at $42.

This story first appeared in the March 30, 2006 issue of WWD. Subscribe Today.

Most of the items are made of a Brazilian nylon and Lycra spandex Supplex fabric that is thicker than much of the fabric used now in activewear, the company said. The fits are a little more generous and are designed to appeal to women of different body sizes, said Anita Friedman, a sales representative for the line out of New York. Cohen said the company is self-financed, and they are also working with a factor, Rosenthal & Rosenthal.

Amma has been picked up by Paragon Sports, as well as women’s specialty stores this season, and the company hopes to reach sales of $15 million in three years, Cohen noted. The company is also targeting yoga studios and spas.

Derian Apparel has its headquarters and a showroom at 222 West 37th Street here, and is using factories in Brooklyn to make the garments. Derian was set up for Amma, but “our model includes strategic acquisitions when appropriate,” Cohen said.

Erebelle
Erebelle is designed to bring an artistic point of view to activewear.

The Austin, Tex.-based company is the brainchild of graphic designer and artist Tina Schweiger, a longtime athlete who sought to develop a fresh approach to the category.

“This line is inspired by yoga, but it is designed to be a crossover between active and casual,” said Schweiger. “I do yoga and thought it would be great to develop a line that worked well for low-impact activities and isn’t too tight-fitting.”

The initial collection of 11 items hitting stores this spring include tank tops, roll-down pants, cargo pants, drawstring shorts and jackets in hues such as raspberry, brown and yellow. For fall, the company has added more casual lifestyle attire such as dresses.

Schweiger created the art that is used on the spring and fall collections, and is looking to collaborate with others artists.

“I want to give artists the opportunity to see their work in another venue and show them that they can have other expressions for their creativity,” she said. “The art in the clothing will be low-key. The focus is on the design and the style, and the fashion, and the artwork is the icing.”

Fabrics include Supplex, as well as a spandex blend, and the company is manufacturing in San Francisco, she said. Wholesale prices range from about $29 for the tank tops, to as much as $65 for some of the jackets, and the company is looking to notch first-year sales of about $500,000. Schweiger’s partner in the venture is Eric Simone, who owns an Austin, Tex., boutique and is providing financing as well as serving as Erebelle’s vice president of sales. Simone formerly had a business in the high-tech sector that he sold and is using proceeds from that to fund the business.

The company is targeting boutiques, yoga studios and fashion-forward sport stores, and for spring it was picked up by stores including Betty Sport in Austin and Yoga for Life in Dallas.

The name is the combination of two words: antebellum and harem. “I was trying to find a name that was both feminine and romantic,” Schweiger added.

Emme Sport
It takes one to know one in the case of Miami-based Emme Sport.

Owner Monica Filpo, a former gymnast and activewear importer and wholesaler, was determined to design a fitness line with fashionable looks and innovative fabrics. Filpo, whose parents are Brazilian, couldn’t understand why that country had access to so many more styles and colors than the U.S., an opinion formed during numerous trips there.

“Brazil is more advanced in fitness trends and synthetic fabrics. I decided it was time America got in on the action,” said Filpo, who emphasizes her Brazilian ties and inspiration through her line’s name, which is how the letter M is pronounced in Portuguese.

She began testing the line a few years ago, but only last season did Filpo find her direction, opening national doors such as L.A. Fitness, The Sports Club/L.A. and Gold’s Gym. This year, Paragon Sports has picked up the line and Filpo launched an online store at emmesport.com.

About 90 percent of the collection is made with DuPont’s Supplex, a synthetic material she favors for durability.

Styles evolve fitness trends such as Pilates and yoga, and feature everyday necessities like pockets.

“Many customers are mothers who need functional, utility pieces they can wear outside the gym,” she said of items like black drawstring yoga pants with pockets in cotton Lycra for $35 wholesale or a capri version for $25.

Other top-booking items for spring are drawstring cargo pants in pink, gray or green camouflage in lightweight Supplex for $40 wholesale, and a sports bra in a dozen colors of Supplex with contrast piping for $20.

Fall looks have been updated with seasonal touches like ribbing and velvet trim. A snug hoodie in two-ply Supplex with pockets is available in a dozen colors for $40 wholesale. Sports bras or tanks for $30 wholesale have wide elastic straps that cross and an extra shelf for support.

Fantoo
Fantoo is designed as a lifestyle brand for female sports fans.

The initial products include cotton-ribbed tank tops, and long- and short-sleeve T-shirts that are fitted and have sports logos or phrases on them such as “Nice Catch” and “Unsportsmanlike Conduct.” Some of the sayings are insider sports phrases like “Donuts Are Sweet,” referring to NASCAR.

Fantoo co-founders Carol Doroba and Robin McConaughy met more than a decade ago when they worked together as executive recruiters and both loved talking about sports.

The concept for Fantoo came to them when they realized that women’s sports fans had little merchandise directed to them.

“We wanted something that showed we were sports fans, but had some thought put into it,” Doroba said. “We didn’t want it to be jerseys with big logos on them. We want this to be something women can wear with jeans.”

She said the firm is entirely self-financed.

“We had some opportunity to get financing, but we felt that they didn’t understand the fashion business and we didn’t want to take the chance,” said Doroba, adding that the partners spoke to professors at local business and fashion schools to talk about the business and learn about financing.

The tops are available in three bodies and six colorways, she noted. In April, the company is rolling out a line of products that have crystals on them, and are slightly more trendy. There is also a selection of tops with images such as a baseball diamond or a race car.

“We have found that our concept is appealing to teenagers and young women, as well as moms of boys who play sports,” Doroba said.

The company is based in Franklin Park, N.J. Wholesale prices range from about $16 to $20 for tanks and T-shirts, and go up to $30 for the crystal items.

The line was initially sold online at fantoo.com and has begun to roll out to boutiques and some sports stores. The duo also plans to add bottoms and expand the collection in coming months.

The apparel is part of a larger strategy to create a lifestyle concept. Doroba and McConaughy are doing a podcast where girls talk about sports that is available for sale on iTunes and is called Fantoo Girls. The company has also had talks with ESPN about developing content.

Doroba said the company expects to hit sales of about $3 million by the end of 2008, the bulk of which is coming from apparel.