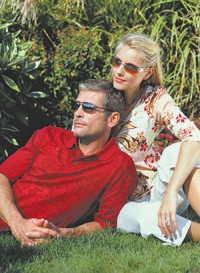 The $200 million apparel vendor was renamed CJ Apparel Group and has a new chief executive officer and president, Jeff Levy.

Levy replaces Jonathan Spier as ceo and Ken Sitomer as president. Spier and Sitomer, two of the firm’s three owners — the third was a silent partner — were bought out in the deal and are leaving to pursue other interests, but will advise the new company.

“It has been a great experience, leading this first-class team to just under $200 million in sales in six years,” said Sitomer. “While it is sad for me to leave the company, it is time for me to pass the reins to Jeff Levy and the new CJ Apparel Group team, which will be backed by Hilco Consumer Capital.”

Levy will be responsible for the management of all men’s, women’s and children’s wholesale brands and manufacturing. The firm produces apparel under the Caribbean Joe, Havana Jack’s Café, Jamaica Bay, Periscope and Cupid’s Cup trademarks, as well as private label.

For the last year, Levy has headed Levy Merchandising Group, a New York apparel consulting firm. Prior to that, he was at Kellwood Co. for three years as president of two separate divisions, and before that he was at Jones Apparel Group for 13 years and president of the Rena Rowan division.

“I am excited about the opportunity to take these established brands to a new level with the help of the brand-building expertise of our new owner, Hilco Consumer Capital,” said Levy.

One of Levy’s first moves was to promote from within the company to give executives responsibility over their divisions.

Daniel Kaminsky, already chief financial officer, is adding chief operating officer to his duties. Caribbean Joe founder and division president Ross McConnell has been promoted to executive vice president and will work directly with Levy on merchandising and sales.

Salter said by focusing on drastically stepping up marketing, as well as streamlining production, such as working out of fewer factories, he thought the company could grow to $500 million in three to five years. In particular, he said marketing spending was close to zero, and beginning in May, the company will spend as much as competitors like Tommy Bahama, although he declined to reveal how much he would spend.

“We believe that Caribbean Joe is a lifestyle, and we are going to build on that,” Salter said. “The company did a lot of things right, and what they did wrong were minor mistakes that we can easily fix. Going forward you are going to see a company that is very cohesive.”