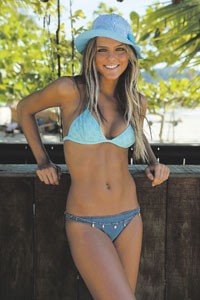 A number of small, fashion-forward swimwear brands with reputations founded on success in specialty stores are breaking into the big time.

“Bigger retailers we never had in the past are now giving us a shot,” said Amahlia Stevens, designer and president of Laguna Beach, Calif.-based brand Vitamin A. “Those buyers are much more receptive to our calls or are actually seeking us out. I think some of the more cautious retailers let their peers take the risk up front and they now feel confident because we’re still new, but we’ve proven ourselves in high-end boutiques around the world.”

Torey Schulof, owner of the J. Rosen showroom in New York, which represents brands including Lisa Curran and Vix, said: “Stores like Bloomingdale’s, Nordstrom and Saks are looking for specialty items to spice up their floors. They want different prints and extra details to make their presentation more interesting.”

By investing in niche brands, department stores and other large chains are seeking ways to boost business and entice consumers with fashionable and directional products not widely distributed. The swim industry remains largely seasonal and many shoppers don’t think about buying new brands until hot weather sets in. Last year, a number of stores saw lower margins in swimwear, since shoppers, especially in the Northeast, didn’t start buying swim until late in the year due to cooler spring temperatures, and prices had already been cut.

Women’s swimwear sales were $2.7 billion in the 11-month period ended Nov. 30, a 6.4 percent increase over the prior-year period, according to The NPD Group.

The swim selling season kicks into high gear this month and next, and niche swim brands are well represented at department and chain stores around the country. Among these fast-growing niche labels are brands such as Letarte, Lenny, Vitamin A, Lisa Curran, Island Co. and Poko Pano. Stevens, who started Vitamin A in 2000 when she was working full-time at Abercrombie & Fitch, sold to Neiman Marcus for the first time this year and noted that her orders in single-door stores have increased 100 percent over last year. She’s also been picked up at Everything But Water and Swim & Sport, two East Coast swim chains she’d been unable to break into in the past. Her line wholesales for $21 to $44.

Contemporary label Island Co., now in its third season, has also been picked up by Everything But Water this season, said creative director Spencer Antle. The company has seen fast growth in boutiques over the last two years, which has allowed it to dramatically expand its product offerings and tap larger stores, he noted.

Amy Snyder, North American president of Poko Pano, a Brazilian brand that launched in the U.S. two seasons ago with a strategy to focus on surf and specialty shops, has already seen 50 percent growth over last year and is now in talks with department stores to bring her line into their summer mix, typically a test period for new brands.

“That April and May shipping window is really narrow, but it’s a chance for stores to get to know you and it’s not a big risk for anybody,” she said. “It can be the road to a longer relationship. Eventually, we hope to sell there during the resort and spring seasons, too.”

While a small line’s success at an influential boutique is often enough to convince department stores to take the plunge, trends within retail also govern how bigger stores do business.

“Boutiques now want to be more one-stop, offering a lot of product categories to capture as many customer dollars and meet as many needs as possible,” said Snyder.

This has also influenced the way larger stores, vying for the same customer dollars, do business. Many are taking a more entrepreneurial approach and varying their products, as well, adding the smaller lines to the mix. Barneys New York, for example, picked up brands including Lenny, a new Brazilian swim label, for this season.

“It’s so much more fun to shop in department stores now because there are so many smaller brands to look at,” said Lisa Letarte Cabrina, designer for the Maui, Hawaii-based brand Letarte, which sells in Bergdorf Goodman, Saks Fifth Avenue, Bloomingdale’s and Neiman Marcus.

“Our brand is known for mixed prints, and the fact that they’re buying some of the more unusual ones and not just the basics is a positive development. They’re zooming in on their customer yet keeping the image of the brand.”

Many in the swim industry believe these are positive strategies, particularly when increasingly fashion-aware customers come in asking for smaller brands by name.

“Retailers are taking a new approach because their customers are getting more savvy and demanding that they provide what’s new,” said Vitamin A’s Stevens. “If they don’t, someone else will.”

On the flip side, many small brands find the best way to court specialty stores is by offering flexibility that larger manufacturers often don’t.

“Being flexible when you’re new – in terms of shipping requests, quantities, colors – is critical,” Snyder said.

Whereas some lines are willing to customize orders to meet an individual retailer’s needs, others go a step beyond, repositioning themselves in a higher category in order to capture more business. Santa Ana, Calif.-based L Space – which began seven seasons ago as a junior line sold at Urban Outfitters and directional California boutiques such as Molly Braun’s/Brown’s – has since bridged into the contemporary category by elevating its product with luxe details like brushed hardware in fine gold.

“We opened at Nordstrom for the first time this season, and I think they’re on board with the more upscale feel that we’ve come into,” said sales manager Johanna Pate. “With so many discount stores like Target and Old Navy doing swim, we had to take it up a notch.”

Wholesale prices average between $28 and $40, with a higher-end suit like a hand-crocheted one-piece with gold detailing wholesaling for $69.

But competition is fierce, as more small brands are looking to break into the business and established fashion brands are entering the swim scene, or have already done so, including Michael Kors, Carmen Marc Valvo, St. John Knits, Juicy Couture, Diane von Furstenberg and Choice Calvin Klein. At the same time, discount and low-priced chains such as Target and Old Navy have expanded their swimwear offerings.

“There is a lot of saturation in swimwear now,” said Mark Sidle, president of the Miami-based Swim ‘N Sport chain, which now has 35 stores. Sidle said his chain is evolving and shedding some of its more moderate labels for more stylish contemporary brands.

Sidle said he would like to carry more small and niche brands, but said in his experience, many of those lines lack the back-end structures to work with bigger stores.

“It’s different to supply a chain store from a small boutique and many small brands haven’t figured that out yet,” he said. “They can’t afford to supply us and that limits us.”

For those niche brands that have figured out how to supply larger chains, the future looks bright.

“Across the board, people are coming in and asking for things that no one else has,” added Antle of Island Co. “They are picking us up as a niche brand rather than the bulk of their business because they want something to flesh out their assortment.”