Wooster appeared in-store for a day of style consulting and meet-and-greets. 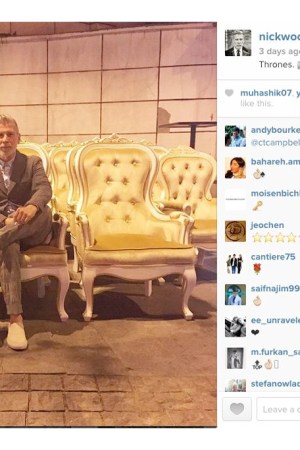 WOOSTER IN SHANGHAI: Nick Wooster is currently in Shanghai for the launch of his Wooster + Lardini capsule collection at Strasburgo, a Japanese-owned luxury men’s wear boutique with two outlets in China. Wooster appeared in-store for a day of style consulting and meet-and-greets, first in Beijing, where he visited the Strasburgo store in Parkview Green, an upscale art gallery-cum-shopping mall in the commercial Chaoyang District. Now in Shanghai, Wooster’s visit centers around the boutique in Yifeng Galleria, a heritage building on the Bund specializing in designer men’s wear. This is the first time that Wooster’s pieces are being sold through an official outlet in the country. Speaking with WWD at Strasburgo in Shanghai, Wooster said: “It’s just been incredible. It was my first time in Beijing, at the beginning of this trip, and I went to see Tiananmen Square, the Forbidden City, the Great Wall. I’ve been to Shanghai once before, but the views still amaze me. The Bund is just unbelievable. And what’s so crazy is to think that right across the river, all of that’s only been around for 10 years or so.”