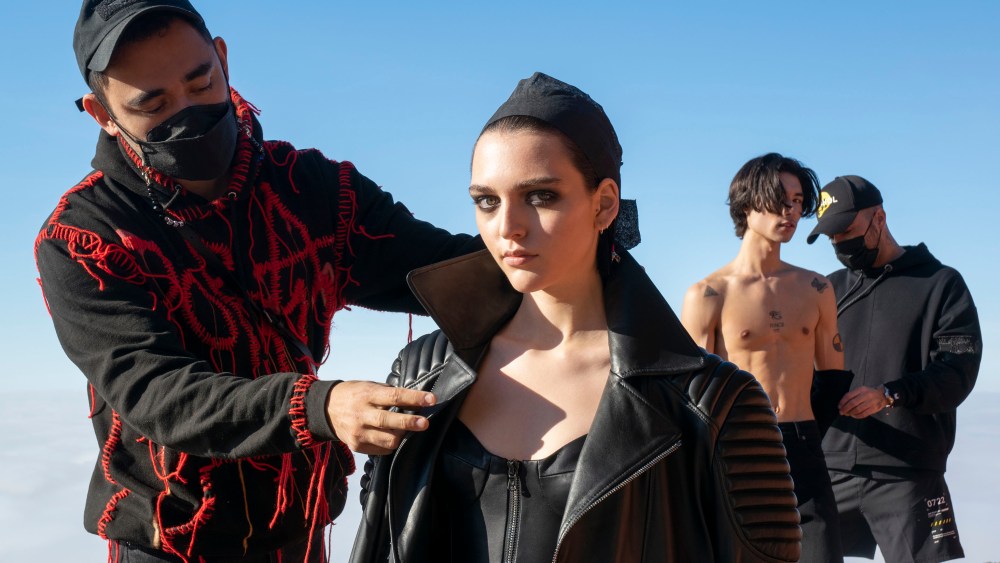 Launched in Berlin in 2012, Marcell Von Berlin has a large following in Germany and has generated attention in the U.S. with the help of celebrities. A retail shop-in-shop opened in October at Showfields in New York.

But this NYFW collaboration was a match made in L.A. Pustul settled down there last year to grow his U.S. business and be closer to the Hollywood stars he’s trying to court, and Formichetti, known for his roles at Diesel and Mugler, also set down permanent roots in L.A. last year.

“We need to save fashion, so anything I can do to help creators, I will. And we need someone like him in L.A., so I said, ‘Let’s collaborate and make it even bigger,'” Formichetti said during a preview at the Marcell Von Berlin flagship on Melrose Avenue. “I have always been a big fan of his work and used his stuff.”

Gaga wore a denim minidress from the designer’s spring collection on Instagram earlier this month; Jennifer Lopez, DaBaby and Ella Mae have also worn the brand’s logo, print and denim streetwear looks, which Pustul is expanding on for fall, with colorful oversize tailoring, leather minidresses, chunky knits and more, in the hopes of reaching more of a luxury client via high-end retailers like Saks Fifth Avenue, Galeries Lafayette and others.

After dealing with him for years over email, Pustul first met Formichetti face-to-face a couple months back when the stylist wandered into the store and upstairs studio. “For me, he’s the number-one stylist, creative director and art director and we need something for my brand like this,” said Pustul, who attended Parsons and had stints working at Donna Karan and Michael Kors. “Next year will be 10 years for us, so it’s a good time to invest in presentations to reach a bigger audience.”

“In L.A., we tend to go super street or glamorous, and he has both,” Formichetti said. “Normally you are a young designer with cool things and hope for the best. But he has a solid foundation of a collection that’s wearable, and now we need to make it more interesting in the fashion space. And as important as it is to be virtual, it’s also important to be physical,” he added, pointing to the advantage Pustul and many other L.A.-based designers have to be able to combine work and retail spaces.

The Marcell Von Berlin flagship, recently expanded from 1,181 to 5,087 square feet, will soon also open a coffee shop and fragrance lab inside.