The onetime reality TV star opens up about her life. 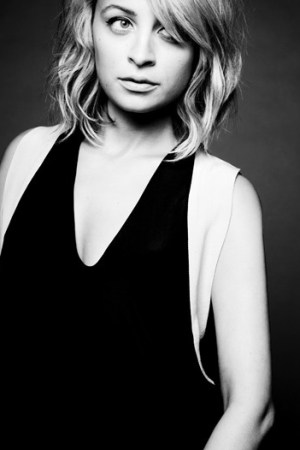 A delicate-looking cursive tattoo graces the inside of Nicole Richie’s left wrist. And although she isn’t one to volunteer personal details about her life, she obliges a bit hesitantly when asked for specifics.

Richie rolled her eyes, shrugged her shoulders and explained, “It says, ‘Virgin.’ ”

Any presumptions should stop there. Like much about her, there is more than what first appears. The tattoo, like the green hair she once had in high school and the party-girl prefix that used to accompany any tabloid reference to her name, is now a footnote of her past. The teenage trip to the tattoo parlor was a wink at her Virgo status. The zodiac reference is something she has long outgrown but has learned to live with.

During an hour-long interview in a sleepy cafe in Manhattan’s NoHo, Richie made it clear she won’t be labeled by the media or by her own doing. In New York to talk up the expansion of her two collections — House of Harlow 1960 and Winter Kate — she was clear-eyed and calm, pretty much never looking away. Although she readily talked about a recent girls’ night dinner she hosted for 10 Nordstrom buyers at the Sunset Tower Hotel’s eatery and how much she likes cooking dinner for her family, she was less inclined to dish about her former stylist Rachel Zoe or once-fellow rabble-rouser Lindsay Lohan. (A publicist interjected more than once.) As for Lohan & Co., Richie said, “I just wish everybody happiness. Everyone has the right to be happy. Other than that, it’s really none of my business.”

In fairness to Richie, why would she want to delve into her nights spent clubbing? She did her time (however briefly, for one of two DUIs years ago) and has since moved on. She doesn’t spend her days relieved she is no longer lumped among the party girls. “I’m 29 right now, and I can look back at any stage in my life and say, ‘Oh, yeah, that was this stage, when I was seven or 13,’ ” she said. “It’s more just looking back and looking at different parts of your life. But that’s what growing up is. That’s what evolving into a woman or a man is.”

Perhaps most telling of her turnaround was how she recently lashed out at the paparazzi agency X-17 with a letter on her blog for stalking her daughter outside the child’s school. She and her companion, Joel Madden, front man for the band Good Charlotte, have two toddlers, daughter Harlow Winter Kate Richie-Madden and son Sparrow James Midnight Madden. Despite recent reports of a December wedding, Richie did not appear to be in any rush to wed her beau of four years, nor had she looked at wedding gowns. “That part I don’t know,” she said. “Right now we’re just so busy with work. Joel’s on tour and I’m here promoting the line. I’m in the middle of a book tour. Joel and I are hippies. We just kind of go with whatever.”

Asked what’s most challenging about being a working mother, she said, “Probably just wanting to be everywhere at one time.”

Richie, the adopted daughter of Grammy Award-winning singer and songwriter Lionel Richie, became a paparazzi target after teaming up with her childhood pal Paris Hilton for the reality show “The Simple Life,” which ran from 2003 to 2007. Her real life has proven to be anything but.

Within the past 16 months or so, her godfather, Michael Jackson, and former boyfriend DJ AM died. Last month, Kitson filed a lawsuit against Majestic Mills, the Canadian company that produces Richie’s collections. Kitson alleged that it lost more than $500,000 in profits because Richie was not required to make a personal appearance at the launch of Winter Kate clothing and House of Harlow 1960 shoes. The retailer also said it was forced to take markdowns to compete with other stores that bought the same goods at lower prices. Majestic Mills’ president Rick Cytrynbaum declined to comment, as did Richie through a spokesman.

Clothing designer isn’t the only moniker she now wears; sunglasses and handbags will make their debut for spring and fall 2011, respectively. As author of “Priceless,” her second novel, which has just been released in the U.K., she is wrapping up a book tour. Richie is also back acting on NBC’s “Chuck.” Her musician tag includes proficiency in piano, violin and cello (the first she picked up at the age of three). Releasing an album on which she will handle the instrumentals and singing is on her to-do list, but that, along with developing cosmetics for her brands and a nonautobiographical sitcom she is crafting and hopes to star in and produce, for an undisclosed network, will have to wait.

As for keeping everything aligned, she said, “I’m just very good at scheduling.…I really try to not put too much on my plate. I like to give 110 percent to every single thing I’m doing. It’s important for me to start slow, to go slow and to really focus. I never take on more than two things at a time.”

After years of public scrutiny, Richie has zeroed in on fashion to make a go of her business. Interestingly, she said she never talked fashion with Jackson, her friends Ashley and Mary-Kate Olsen (though she was quick to praise their Seventh Avenue success) or anyone else. “Spring ’10 was my first collection — it was just something so new and it really was an experiment,” she said. “It really was me walking into the completely unknown. I was very hopeful, but you just never know in this business. Now that I am on my third collection, I’ve become so familiar with this world. I have been traveling all over the world, meeting with buyers, doing appearances and meeting my customers to get their feedback. Now I feel I know them very well, and I have been designing for them.”

However rushed shoppers can be from time to time, Richie said she likes making the rounds, as she has in Los Angeles, New York, Dallas, London, Paris, Montreal, Toronto and Seattle. Spring ’11 is heavier on prints, since that’s what they asked for. Winter Kate is carried in 461 retailers worldwide and House of Harlow 1960 is available in 376.

Unlike most celebrity designers, Richie didn’t dive-bomb into fashion with sportswear, preferring to start with jewelry, in 2009, before venturing into ready-to-wear with Winter Kate and shoes with House of Harlow 1960 in spring 2010. A compact sunglass collection made its debut this fall and an official launch is set for spring. Handbags will be introduced for fall 2011. With jewelry, “I can just go — the more outrageous, the better,” she said, noting the popularity of a gigantic starburst ring, headpieces and customized designs.

A pair of vintage white Chanel sunglasses from Resurrection was her last splurge, but they serve a greater purpose than shielding the sun. “When I wear sunglasses, it’s because I don’t wear makeup,” Richie said. “I don’t know how to do makeup — it’s just not a part of my life. That being said, sometimes you need to put something on your face, and that’s why I tend to wear bigger frames. So I almost think of sunglasses as masks to just cover it up. And I think you can have fun with them.”

Asked if they act as a shield from the paparazzi, she said living in Laurel Canyon allows for a good amount of privacy. “Living in L.A., it’s very easy to create your own environment. You’re really going from wherever your destination is to your car to your next destination,” Richie said. “Both my parents live in L.A., as well as my lifelong friends, so I would say I’m myself all the time.”

Abiding by her father’s advice, she said she considers each day to be “a blessing” and tries to be thankful for everything, from the plates we use to the opportunities we have. Given the homebody life she described, it was not surprising to hear she does not keep tabs on the tabloids. “To be honest, I really don’t see it. My days are so full. I’m working so, so much and really I’m just with my family and friends. It’s just not a part of my life. I actually never really know [what is being written].”

Interestingly, music is always the starting point for her creative process. That concept might be a holdover from her figure skating days. In fact, the sport, which she competed in nationally for 11 years, indirectly led her to fashion. At the age of seven, Richie started working with her father’s costume designer, who used excess fabric from his stage clothes to whip up her on-ice confections — a leaf-covered “Legends of the Fall”-inspired gold costume was a particular favorite. Their collaboration lasted until her senior year in high school. “Then I had a choice to skate or to go to college. I chose college,” she said.

In music, Richie is a huge fan of Janis Joplin and other classic rockers and gets to live shows when she can. Lately, she has been listening more to Billie Holiday, Nina Simone and Etta James, which has translated into a more romantic spring collection. Frequent jaunts to her parents’ home state of Alabama furthered that direction.

Wearing a pearl-colored Winter Kate brocade jacket, House of Harlow 1960 shoes, a vintage Chanel bag, a ring of her own design and black jeans and a black top from brands she wasn’t sure of, Richie laughed as she recalled how, as a teenager, she covered her bathroom walls with favorite fashion moments clipped from Vogue. Her taste has since evolved to Balmain. “There is something about all of it that is a little bit extra — something over-the-top,” she said of the collection.

As for magazines’ practice of dissecting celebrities’ style, Richie said, “There are positives. There are young girls out there who want to know and who are interested in fashion. Interest is never a bad thing.” The wider range of runway models is another plus. “I like that things aren’t so uniform anymore. I love that you’re seeing darker-skinned women and curvier women on the runway. And it’s not putting down any other type. The whole message is it doesn’t matter if you’re thin or you’re curvy. You’re beautiful in your own way. That’s what God gave you, so it’s beautiful.”

Asked how Zoe influenced her personal style, Richie said, “Rachel was my stylist. Now I work with Simone Harouche. I’ve pretty much always been into fashion, and the fun part is experimenting with different looks. A month ago I had long dark hair and then I chopped it all off and bleached it blonde. That’s what fashion is all about — it’s about playing with different looks. When I was 14, I dyed my hair green, and then I dyed my hair pink. When I was 20, I went through a grunge stage, and then a very sophisticated stage. That’s part of fashion — it’s a way to let go and to express yourself. It’s fun to dress up and play with different looks. I’ve been doing that for really my whole life.”

But she is in no great rush to advertise or stage a fashion week presentation. “I would eventually like to have a presentation. It’s good to have goals,” she said. “But I don’t think it’s healthy to have everything all at once. You need to build up to that, and I’m not ready yet.”