LOS ANGELES — As it turns out, drag icon Holly Woodlawn and Gotham socialite Cornelia Guest have something in common: They both like Patrick McMullan and his lens. The duo was among an eccentric klatch of guests at the Fenix... 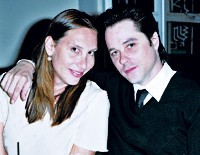 LOS ANGELES — As it turns out, drag icon Holly Woodlawn and Gotham socialite Cornelia Guest have something in common: They both like Patrick McMullan and his lens. The duo was among an eccentric klatch of guests at the Fenix inside Jeff Klein’s Argyle Hotel in West Hollywood to celebrate the West Coast launch of McMullan’s “InTents” tome on Monday night. In what appeared to be a flashback to Eighties New York club life, guests included Angela Janklow, Bettina Zilkha, Denise Rich, James St. James and Kenny Scharf, as well as local “kids” Brett Easton Ellis, Jacqui Getty, Fairuza Balk, Amanda Scheer Demme, Bryan Rabin, Frankie B’s Danielle Clarke and her rocker husband, Gilby Clarke.

Later, at the east side Mexican restaurant Malo, Paper Magazine’s Kim Hastreiter and David Hershkovitz continued their own Left Coast book launch for “20 Years of Style: The World According to Paper.” The toasting had started the evening before at the Hollywood nightspot Star Shoes with Pedro Almodovar and Penélope Cruz. At Malo, the Paper duo fed a nonstop feast of eggplant tacos to artists Shepard Fairey, Adam Silverman and Scharf, as well as to Shawn designer Yohanna Logan, stylist Miles Siggens and Thomas Lauderdale and China Forbes of the lounge band Pink Martini. When Forbes revealed that she happens to be John Kerry’s cousin, there was a resounding cheer from the group.

Politics and partying were also on the mind of Mischa Barton of “The O.C.” Sunday night at the Hollywood club Tokio. As it turns out, Barton isn’t a U.S. citizen. The British expat has had a green card since age five, and hasn’t thought to take the Pledge of Allegiance. That may soon change. “The gravity of this election has me inspired to finally become a naturalized citizen to be able to vote in the future,” she said. Barton’s fellow “The O.C.” stars, Rachel Bilson and Melinda Clarke, joined her at Tokio, along with hosts Heather Graham and her director boyfriend, Chris Weitz (a partner in the club). The event was intended to raise funds through the bar and an auction with Elara Diamonds, and awareness for the nonprofit International Foundation for Terror Act Victims.