The nightgowns populating the city’s streets this season are not a sign of a sleepwalking epidemic, but rather an example of new modesty taking hold in women’s fashion.

It’s out of bed and straight onto the street this summer in New York — where women are co-opting frilled, long-sleeved nightgowns as everyday dresses.

The shapeless sleepwear tents — often accentuated with ruffles, quaint embroidery and homespun floral prints — are now considered by some as “perfect dresses waiting to be worn,” appreciated for their comfort and thoughtful details.

Nightie fever is catching on among creative types who are uninhibited by corporate dress codes. They are sourcing vintage gowns on Etsy and in flea markets, pairing them with sandals, sneakers and pastel hair clips for an au courant pastoral look — as if the Vermont Country Store had spurred a revival with a Brooklyn outpost. Modern interpretations by brands like U.K.-based emerging label Story Mfg., viral pajama brand Daily Sleeper and Florentine linen house Loretta Caponi are well represented on fashion-forward e-commerce sites like Matchesfashion.com and Moda Operandi.

While summer was once seen as the season to bare all, a celebratory moment to shed winter’s layers and reveal an unobstructed silhouette — the post #MeToo era has heralded a new modesty in some quarters of women’s fashion. Last summer saw the rise of prairie dress styles — knee-length frocks erring on the side of Laura Ingalls Wilder cosplay. Nightgowns — only marginally less cartoonish and seen as the prairie dress’ second coming — are quickly landing in notable closets.

The prairie dress had been criticized for its restricting cuts that were thought to exclude many body types. Nighties, fashion’s equivalent of a frilly yurt, “compliment many different bodies,” Matchesfashion’s head of women’s wear Cassie Smart said of the free-flowing styles, which are seeing high sell-through rates on the site. “Women’s lifestyles today are so busy, we all want to get up and go traveling 90 miles an hour while looking polished. [These dresses] offer a strong style and aesthetic while being really comfortable,” she said. 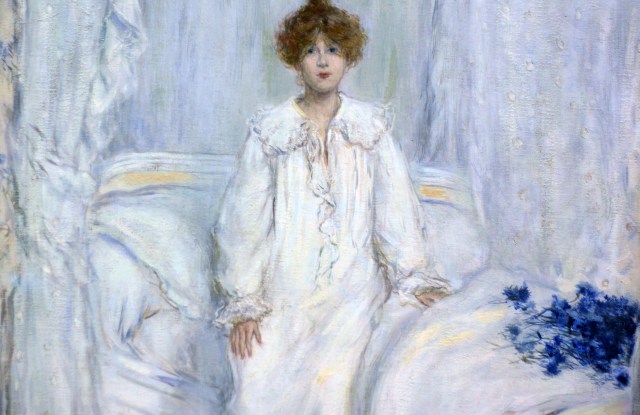 A Jean-François Raffaëlli painting from 1890 depicting the kind of nightgown that is suddenly trendy.  Universal History Archive/REX/Shutterstock

Illustrator and recent nightie convert Joana Avillez chimed in of their merits: “The fabrics chosen for nightgowns are much softer. The clothing you buy is never that soft and cozy and comforting.”

On Ludlow Street, the racks inside Nikki Chasin’s namesake store are lined in nightgown dresses that leave little skin exposed — each cut from colorful, whisper-thin fabric. She is attracted to how their fluid shapes allow for greater mobility and align with the post-#MeToo concept of dressing for one’s self. “Being covered, you are able to adorn yourself in things you like. Things that make you feel pretty rather than showing the shape of your body to feel pretty. It’s almost a ‘f–k you’ to suits and business-casual dressing. I’m going to go about my day and accomplish things and be as comfortable as I am in a nightgown.’”

“I have always felt like wearing tight-fitting clothes. I like to wear stuff that cinches at my waist, but lately I don’t want anything clinging to me, I want something loose,” concurred Avillez, who scours Etsy for late-19th-century nightgowns embroidered with initials that match her own.

“I had always liked to show my body when it’s warm, but now I have this feeling of being much more comfortable — maybe I didn’t realize how uncomfortable I was before,” she said. 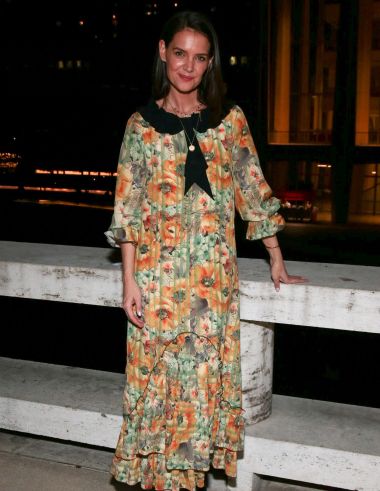 During her high school years in San Francisco, the painter Cynthia Talmadge held a job at a local lingerie shop, hawking nightgowns to “very well-to-do old ladies.” She held onto the Eileen West styles, a brand sold at yesteryear retailers (including the Vermont Country Store), and now routinely wears them “to paint in my studio when I’m working in the summer, then also to sleep and around the house and to walk my dog.” Adding to her stockpile, Talmadge recently thrifted a quartet of vintage nighties during a residency in Enschede, the Netherlands, where she was designing costumes for a new production at the Nederlandse Reisopera. “I am a little unique in the way that I can wear a nightgown to work,” said the artist.

The trend is captivating New York women to the point where they are raiding a housewares store to get the trend. Sandeep Salter, owner of the Brooklyn Heights boutique Salter House, said the shop’s selection of English cotton nightgowns ($52 to $65) are well outselling more conventional merchandise like candlesticks and napkins.

Salter now regularly sees women wearing the nightgowns when strolling around her neighborhood. “You can’t really find that kind of light cotton embroidered dress without getting a straight up nightgown,” she said of the rationale. “It’s almost a tent but not quite a muumuu, it has a really airy feel to it. They have some tailoring whether it’s a smocked top or a collar of some sort and then there’s a lot of pleating. I think a muumuu is more like a big sack, like one big pillowcase.” 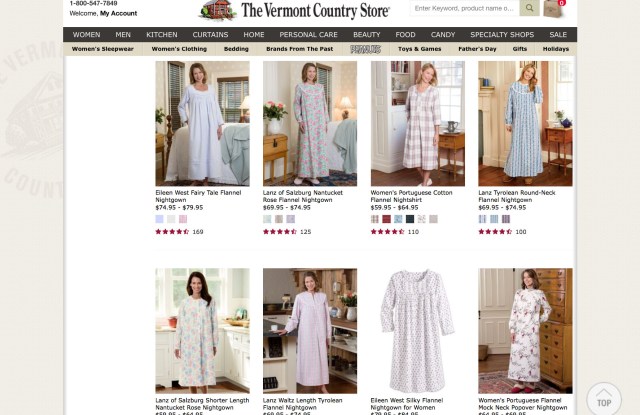 Nightgowns for sale through the Vermont Country Store exude the kind of pastoral aesthetic that has fallen into favor.

Boasting a collection of some 20 nighties, Leigh Plessner, creative director of Brooklyn-based jeweler Catbird, considers the house dresses “a little bit of an antidote to ath-leisure — it’s fully leisure,” wearing them about five out of seven days of the week. “People often think it’s a dress,” she said. “Maybe because of what I pair them with, I like to ground it with some black accessory or black bra. I wear with a pointy-toe black flat for a sharp line and then all of my jewelry.”

“The trick is to wear a slip under the ones that are more sheer,” Plessner added. “It’s long-sleeved, it’s tissue-thin so you have the best of both worlds. Sometimes it’s nice on a hot pavement to be more covered up and not have that steam all over us.”