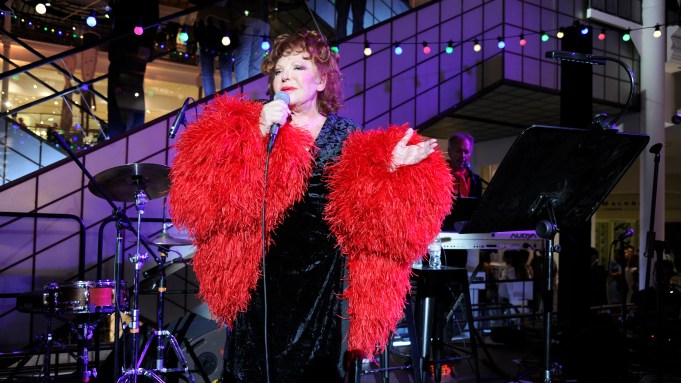 PARIS — Régine Zylberberg, the nightlife powerhouse who once ran a club empire spanning from Rio de Janeiro to Kuala Lumpur, has died at the age of 92, French media reported.

The redhead long known to the international jet set simply by her first name passed away “peacefully” near Paris on Sunday, her granddaughter Daphné Rotcage told news agency AFP.

“The queen of nightlife has gone: closure due to a long and storied career,” comedian Pierre Palmade wrote in a tribute released at the family’s request. Though he and Régine were almost 40 years apart in age, they were close friends and also collaborated onstage.

In addition to running nightclubs, Régine was a singer who performed tunes written by such luminaries as Serge Gainsbourg and Charles Aznavour, and appeared at Carnegie Hall in 1969.

Nicknamed “La Grande Zoa” after one of her songs, Régine often performed wearing a feather boa — though she had also been known to walk around her clubs with a live boa constrictor around her neck.

A Jewish survivor of World War II, the Belgian-born entertainer opened her first nightclub in Paris in 1957, drawing an eclectic crowd.

“There is not a nightclub owner in the history of France who was as famous as she,” journalist Bertrand Dicale said on France Info radio. “She was one of the first to open a place where people come to dance to fashionable records. She was also one of the very first to decide that everyone was welcome and that it would not be a clan, a family, but everyone.”

“Goodbye Régine, you made nightlife sparkle with humor and panache, and made a mark on French music with songs that have become classics,” Bachelot wrote on Twitter.

Born Regina Zylberberg in Etterbeek, Belgium, to Polish Jewish parents, Régine grew up with an absentee mother and a gambler father, learning early on to get by on her own wits.

In hiding in France during the war, she helped the Resistance effort. “I’m not a medium, but I have an instinct,” she told WWD in 2015. “During the war, I would go out at night. The curfew, the Germans — I wasn’t scared. I would deliver messages.”

But the period ended in tragedy for Régine when her boyfriend, Claude Heyman, was deported in 1944. “He was my first love, and I think, for me, my only love — voilà,” she recalled in a matter-of-fact tone.

With steely resolve, Régine went on to hoist herself from hat-check girl to the top of the social pyramid, rubbing shoulders with the likes of Aristotle Onassis, Françoise Sagan and Yves Saint Laurent on the way. At one point she oversaw 23 clubs on three continents.

“I think people have a destiny,” she said. “I got divorced at 19-and-a-half because I wanted to do what I wanted. It was something I had set my heart on. It wasn’t about being famous, but I wanted to be loved the world over.”

It also highlighted her career as an actress, with bit parts in films including “The Seven-Per-Cent Solution” and “The Last Train.” Fashion designers were by her side from the start. She knew Karl Lagerfeld since he was 18 and wore designs by everyone from Madame Grès to Dior, Saint Laurent, Valentino and Guy Laroche.

As might be expected, Régine was a treasure trove of juicy anecdotes.

There was the time Mick Jagger was turned away from the opening of Régine’s New York City outpost because he was wearing a jacket and sneakers — the notoriously strict door policy specified men had to be in a dark suit.

Or her long-standing feud with Frank Sinatra over a fracas in Monte Carlo, which he wrongly believed she had leaked to the press. When Régine appeared in Las Vegas to sing with Paul Anka at Caesars Palace, a sullen Sinatra refused to introduce her onstage.

“I sent him flowers. He was not happy — he sent them back,” she recalled. “Not that I care. Whether I was part of his inner circle, frankly, never ruined my life. I mean, he really was a pain in the ass.”

Régine’s sharp tongue and ability to hold a grudge — she referred to former friends as “the living dead” — were as legendary as her hospitality. She gleefully told the tale of sending a cactus to a New York Times food critic who had dissed the restaurant at Régine’s in New York, run at the time by famed chef Michel Guérard.

Then there were her famous lovers, including Gene Kelly, with whom she had a three-month affair. “We remained very, very close friends,” she said, recalling her sadness at watching him go blind in old age.

Among her deepest personal tragedies was the loss of her only child, Lionel Rotcage, who passed away at the age of 58 in 2006. “My son is the only thing I miss,” Régine said of her heyday.

Her solution was to keep on working well past retirement, typically getting by on four hours of sleep a night.

“I don’t want people to feel sorry for me. That doesn’t interest me. I want them to laugh with me and to be happy. Boring people — I want nothing to do with them. So I banish boredom from my existence, and I think I have no time to be bored,” she said.