Nights at the Museum With Olivier Saillard

The man of the hour will be seen onstage this week in “Eternity Dress,” his second collaboration with Tilda Swinton.

By Joelle Diderich and Miles Socha on November 12, 2013
View Slideshow 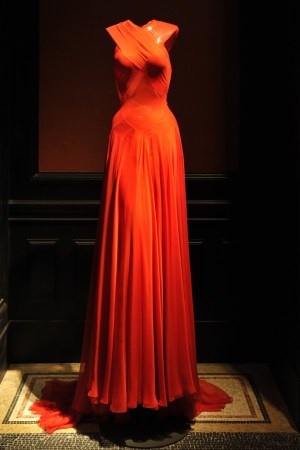 Call him the man of the hour: Olivier Saillard, director of the fashion museum at the Palais Galliera in Paris, is behind three exhibitions in the French capital this fall, and will be seen onstage this week in “Eternity Dress,” his second collaboration with Tilda Swinton.

The performance will see the Oscar-winning actress and the brainy curator exalt the process of making a garment whose mission goes way beyond desk-to-dinner: This singular dress is meant to echo all of contemporary fashion history, a summation of decades of silhouettes Saillard has seen over endless nights at the museum.

Though the Palais Galliera had been closed for renovation since he took over in 2010, Saillard raised the profile of the institution by staging shows in other venues. That only heightened the anticipation surrounding the museum’s reopening this fall with a retrospective on Azzedine Alaïa, on show until Jan. 26.

In addition, he curated “Virgule, etc. — In the Footsteps of Roger Vivier” at the Palais de Tokyo, and the Palais Galliera lent a portion of its collection to the Musée Carnavalet for “The Novel of a Wardrobe,” which spotlights the personal style of Alice Alleaume, a sales associate at chic Paris store Chéruit from 1912 to 1923.

Despite his own frenetic work pace, Saillard believes in slow fashion.

“I think the industry needs to produce less and create more,” he mused. “This growing phenomenon of overproduction is killing the notion of seasons, and at a certain point, the consumer is going to gravitate toward clothes with more staying power.”

He argues that fashion exhibitions play a key role in redefining how we view clothing and designers.

“More than ever, our role as museums is to show authors and not advertising initiatives,” Saillard says, declaring the era of one-brand megashows passé. Instead, he is advocating a new form of minimalism that puts the spotlight on the clothes.

“If a piece of clothing needs a set design around it, then it is not worth exhibiting. The clothing should be able to stand on its own. There has to be a form of austerity, even poverty, in the presentation,” Saillard argues. “I think the more we talk about clothes, and the less about fashion, the more everyone will gain from it.”

For the Swinton performance, “he really wanted the poetry of making clothes to come through,” said Clare Waight Keller, the creative director of Chloé, which is underwriting the spectacle and offered its atelier to produce the eternal dress. “The real skill and the work that goes into creating a dress — however simple it may seem — is a huge part of the fashion story.”

It’s a story Waight Keller has been following for months, as Swinton pops into the atelier as the dress evolves from paper patterns, to muslins to the final, penultimate garment: “She’s been using my fitting room, which is next to my office,” says Waight Keller.

She notes Chloé is hoping to take the show to New York and Tokyo.