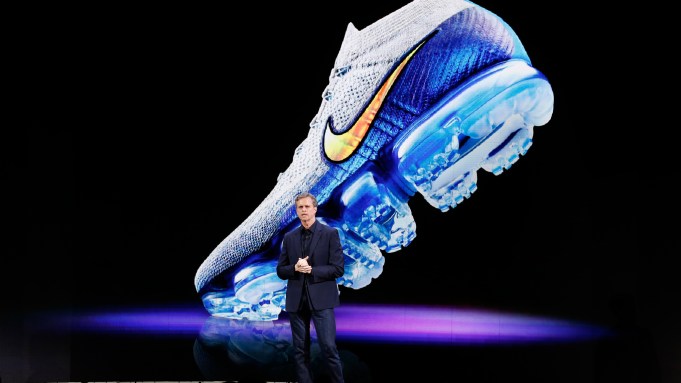 Is it possible to get personal with “Everybody?” Nike plans to do so on its own terms — literally. The brand has a language and “Everybody” is just one of its new words.

Over the course of two days and four events held in New York on Wednesday and Thursday, Nike unveiled a slew of new products, collaborations and technology during its Nike Innovation for Everybody event, an Olympic-sized marketing “experience” timed to an Olympic year — Rio 2016.

The last time the company held a symposium of this sort was October 2014 and the subject was women, specifically the brand’s renewed devotion to its female consumer on the backs of whom it planned to increase its business by 40 percent at the time. This week’s event focused on innovation and technology used to deliver personalization. “We’re at the dawn of a new era in sport,” said Nike Inc. president and chief executive officer Mark Parker, addressing the audience of global media at the event Wednesday afternoon at Moynihan Station. “It’s the era of personalized performance.”

Down the Nike rabbit hole we went. In a grand-scale production by Bureau Betak, Moynihan Station was set up with 11 product station/installations, some featuring the new — Nike Air VaporMax and Nike HyperAdapt 1.0 — others the improved — Nike Flyknit, which Parker noted has grown into a $1 billion franchise since it launched in 2012. The presentation was slick, impressive with the atmosphere of a concert venue, but one where they were serving Portland, Oregon’s top shelf Kool-Aid. The headliners were Parker and Kevin Hart, who introduced the event and is a spokesman for Nike’s cross-training program and recently got his own sneaker, the Hustle Hart.

It was a lot to digest for those with less than Nike acolyte status, but the biggest impressions were left by the HyperAdapt 1.0, a sneaker with an “adaptive lacing” system — meaning it laces by itself — technology that is sure to send techy sneaker-heads into delirium. When you step into it, your heel hits a sensor and the sneaker tightens on its own. There are two buttons to make it looser or tighter. For now, the buttons are manual, but going forward, Nike sees the technology becoming completely automated, so it senses when the shoe needs to be tightened or loosened; for example, as a runner’s feet swell over the course of a long run.

Then there was the Nike Air VaporMax, an evolution of the Nike Air Max, which launched in 1987. The newest iteration has a Flyknit upper attached to a new, pillow-y sole. The advanced technology has eliminated the need for a traditional foam midsole, resulting in what John R. Hoke 3rd, Nike’s vice president of global design, called “the purest expression of air we’ve ever met.”

There was plenty for gear aficionados to geek out over. Nike Anti-Clog Traction was introduced on football cleats. It features a special polymer that prevents mud from adhering to the soles. There were new iterations galore of the Flyknit, including the Free RN Motion Flyknit, with an auxetic sole; the Air Force 1 Ultra Flyknit; the Hyperdunk 2016 with a Flyknit upper, and Kevin Durant’s Air Zoom KD, which also features Flyknit. There were also a series of new kits for football and track and field with Aeroswift technology, which is basically a coordinating system of apparel that works together to create a faster, more aerodynamic performance outfit. The shoes and apparel on display indicated that new performance silhouettes are even more streamlined with less excess material, a focus on texture and Flyknit techniques, which have transferred to apparel and play a huge part in the overall aesthetics of where Nike is going, as well as a color scheme dominated by black with blue, purple and orange accents. The look was coolly industrial.

Nike does not stage events on this scale annually. In addition to capitalizing on the momentum of an Olympic year (Nike is outfitting TK), an event of this size and type is timed to the number and scale of products ready to launch as well as a new message. “We try to look at the innovation pipeline — is there enough that we feel comfortable to make a fundamental shift,” said Hoke. “This time around a fundamental shift is brought by the idea of personalized performance. We believe that this is the future of athletics and sports. We think we have enough ammunition and enough ambitious agenda to come to New York and announce via products and platforms where we’re taking the world of sports.”

Perhaps the biggest example of Nike innovation in the name of personal experience for its athletes is the new Nike+ app, which launches in June, at which time its existing apps, including Nike+ Training Club, Nike+ Running and Nike+ Snkrs will get substantial updates. Nike+ is a data-driven app that asks the user to upload information about his or her sport interests, shoe and apparel sizes, which is used to generate a personalized feed of training content, a store of products the app thinks the user will be most inclined to buy, invitations to local Nike+ events and “Golden Tickets,” which include special offers on merchandise. For example, Nike+ users will be able to reserve merchandise in his or her size and purchase it before it’s available to the public. Nike+ users can also make reservations for Training Club sessions via the app and access his or her Training Club and Running apps. Previously Training Club was only available for women; with the launch of the Nike+ app, it will also be offered to men.

“This app is brand new; it didn’t exist before. It’s your all access pass and manages your entire relationship with Nike,” said Nikki Neuburger, vice president, global brand Nike+ and Nike. “Athletes are looking for more than data and a dashboard. They’re looking for coaching and guidance and a relationship.” Nike declined to break out numbers on their app user, but Neuburger said it’s “a community of millions with over a billion touch points worldwide.”

To illustrate what exactly the Nike+ offers beyond the iPhone screen, after the Moynihan Station presentation, everyone was bussed down to Skylight Clarkson Sq. where they could either participate in a Running or Training Club workout session led by Hart, Victor Cruz and Sanya Richards-Ross or do a NikeiD design session. The setup was undeniably impressive. Anyone who was exercising was directed to a personal locker/mini dressing room where head-to-toe workout gear in his or her size awaited, as well as toiletries so one could leave the event presentably (alas, even Nike has its limitations: There were no showers on site). Those who signed up for the NikeiD session had a desk installed with a computer screen and a bunch of tools that looked like the adult equivalent of a deluxe, creative kindergarten art class led by Nike designer Tinker Hatfield, the man responsible for several Air Jordans, among other Nike icons.

If consumer behavior is increasingly driven by experiences over possessions, Nike made a great case for its ability to fuse the two. The amount of information, product, Nike silos and corporate language was dizzying, and it went on.

On Thursday morning at 9, the fashion press was invited to Nike’s media space at 45 Grand Street, where the next installment of Riccardo Tisci’s collaboration with the brand was disclosed as the start to what the company is billing as “The Summer of Sport.” What that will entail is mostly still under wraps, but NikeLab senior design director Jarrett Reynolds indicated that more fashion-driven designer collaborations would be launched in the lead-up to the Olympic Summer Games.

Tisci previously collaborated with NikeLab, which houses the brand’s designer projects, on two sneakers, a Nike Dunk and an Air Force 1. Beginning in July, his first men’s and women’s apparel collections — completely performance-based — for Nike will launch. NikeLab x RT: Training Redefined features two capsule collections, the first done in black-and-white, the second in floral kaleidoscopic prints that incorporate floral motifs from Nike’s home in Oregon, Tisci’s home in Taranto, Italy, and Brazil, where the Olympics will take place. It’s a fashion-forward look for performance gear that utilizes Nike’s Dri-Fit and Flyknit technologies and has been wear-tested by athletes. Two of the key silhouettes include a one-piece short and tights garment for men and a skirt for women. Reynolds swore these complied with Nike’s “training” standards, which are defined corporately by six movements — lunges, squats, dips, etc. Inez van Lamsweerde and Vinoodh Matadin shot the collection on decathlete Ashton Eaton and track and field athlete Richards-Ross.

To wrap up on Thursday, the company made the big reveal of its Olympic uniforms for Team USA and a number of other countries. Ken Black, creative director for the Summer Olympics in Rio de Janeiro, said the kits for the athletes it will outfit in more than 30 sports at the Games offer technical superiority in materials and construction. He pointed in particular to the Nike Vapor track and field uniforms that feature AeroBlades, a bladelike accent that is designed to reduce drag and create lift.

Black said all the athletes Nike outfits will have access to the technology, not just the Americans. “We haven’t saved anything,” he said.

The games are just beginning.