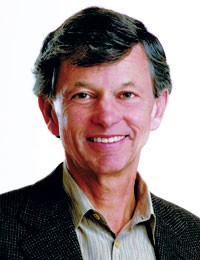 Perez, 57, who began his career selling bug spray, is taking over from a sporting goods industry legend and is the first outsider to lead the world’s largest and most successful athletic company. He steps into the job as Nike is surging: earnings increased 99.5 percent to $945.6 million in 2004, and sales went up 14.5 percent to $12.3 billion.

Industry experts said a key challenge for Perez is growing the company’s business outside of the Nike brand, and adapting to a culture that is steeped in the personality and vision of Knight.

“Outsiders have a mixed record of success at Nike given its unique culture, which has historically rewarded loyalty,” Goldman Sachs analyst Margaret Mager wrote in a recent report.

Perez, Knight and other Nike executives declined to be interviewed.

Knight, 66, is keeping his title of chairman, but responsibility for running the company falls to Perez, a marathon runner who spent much of his youth in Colombia and his entire 37-year business career at S.C. Johnson, where he rose to ceo of the $6.4 billion packaged goods company that manufactures home supplies such as Windex and Ziploc.

Though Nike, whose swoosh is one of the most recognizable brand symbols in the world, is the dominant athletic company, rivals such as Adidas and Under Armour have been expanding market share. Nike’s momentum in the U.S. might be starting to slow, analysts said.

Merrill Lynch analyst Virginia Genereux on Tuesday lowered her rating on the company, saying “Nike’s shift from a one-brand company to a multibrand company will ultimately command a lower multiple in our view….A risk related to this multibrand strategy is the uncertainty around something of a new management regime. Athletic footwear and apparel end market growth is slowing everywhere except China. The slowing international growth may reemerge as an issue next in Japan, especially as Nike’s powerful recent momentum in the U.S. begins to slow.”

This story first appeared in the February 10, 2005 issue of WWD. Subscribe Today.

Hal Reiter, chairman and ceo of executive search firm Herbert Mines, said outsiders who join a company as ceo “have to make sure they know what they don’t know.”

That translates, Reiter said, into a necessity “to be sensitive to possible hurt feelings of other candidates. The first thing any new ceo needs to do is listen and learn. The most problematic thing for anyone succeeding a founder is adapting to a preexisting culture.’’

Reiter noted that Perez is in an unusual situation since new leaders are often brought in to fix an ailing company, which isn’t the case with Nike.

“What he needs to concentrate on is continuing to build the brand and rallying the troops around a new personality,” he said.

Knight, who is notoriously press shy, said recently that Perez was chosen from a field of 75 candidates, and that the company made a strategic decision to seek an executive from outside Portland, Ore.-based Nike.

“While this may appear to be a sudden decision to the outside world and maybe to even a few people at Nike, it was something that was thought about and agonized over for more than two years,” Knight said on a recent conference call. “It went back and forth between inside versus outside…If this were just a Nike brand situation, we would not have gone outside. But in looking forward, you say that in the next five years, the brands other than Nike — this is not a forecast or prediction — but a brand other than Nike could be as much as 25 percent of our total volume, which makes a much more complex picture than what we have today.”

Nike co-brand presidents Mark Parker and Charlie Denson were seen as Knight’s possible successors. Both have long ties to the company and how they mesh with Perez is key. Nike is taking steps to retain them. In late December, Nike revised its non-compete agreements with the pair to provide higher incentives for them to stay.

Nike employees who asked not to be identified said Perez has so far sought to reassure workers that he is not interested in changing the direction of the company — at least in the short term. After being picked as ceo, Perez was largely praised by analysts and market watchers for his global experience and managing different brands under one corporate banner, a priority at Nike, which now has brands such as Hurley, Cole Haan, Converse, Bauer and Official Starter in its stable.

“We see the installation of Mr. Perez as long-term oriented in that Nike sees itself becoming a multibrand company addressing multiple channels and geographies, a strategy which will take many years to unfold,” Goldman Sachs’ Mager wrote.

Robert Drubl, an analyst at Lehman Brothers, said in a recent report: “Perez’s extensive experience managing a portfolio of global brands was a key factor in his hiring, given Mr. Knight’s belief that a significant component of Nike’s future growth will come from other brands and international markets.”

Perez’s personal and professional experiences are in contrast to those of Knight, who has lived in Portland almost his entire life. A native of Akron, Ohio, Perez moved at an early age to Colombia, when his father, a business executive, was transferred to that country. He returned to the U.S for high school. A graduate of Cornell University and the American Graduate School of International Management, Perez started selling bug spray and air freshener at S.C. Johnson in Cleveland in 1970 and became ceo at the privately held company in 1997.

Known as a high-energy executive, Perez also serves on a number of boards, including Kellogg Co., Hallmark Cards and the Grocery Manufacturers of America. While Perez has little experience in sportswear or fashion, he was a director at May Department Store Co. until last May.

Knight co-founded Nike out of the trunk of a car in 1964 and built it into a symbol of sports culture with 25,000 employees. He is renowned for his marketing savvy and innovative product focus. Knight also has a history of stepping back and then returning to the fray. In the years before 2000, he ceded much of the day-to-day operations to others, but returned to run Nike in a more hands-on manner.

Knight holds 25 percent of Nike’s outstanding shares and holds 95 percent of Class A shares. In addition, he owns 16.6 million shares through trusts, corporations and partnerships.

Coming off its financial and operational performance in the last year, analysts said Nike is positioned to keep growing, despite what some see as a slowdown in the international athletic arena. Its recent acquisition properties are where analysts see significant sales and earnings potential. Among its most strategic purchases was Starter, bought for $43 million in August. This move gives Nike access to the fast-growing mass channel and stores like Wal-Mart.

Nike has formed a division called Exeter Brands that oversees the Starter, Team Starter and Asphalt brand names, and is the master licensee of the Shaq and Dunkman brands of athletic apparel, footwear and accessories, all of which are sold to discount retailers. The Starter brand is being prepared for a relaunch for fall, said Wal-Mart executives, who declined to give any specifics about the changes ahead.

“Starter will be the real gem in the company,’’ said John Shanley, an analyst at Susquehanna Financial Group. “There is huge top-line growth potential and they can use the existing infrastructure to penetrate the mass market.”

Nike is in a good position to make acquisitions. The balance sheet has “never been stronger” Drubl said. The company ended the second quarter with $1.7 billion in cash and $700 million in long-term debt, he said.

Although Nike won’t comment on possible acquisitions, Knight said on the conference call: “I think one of the things we don’t want to do is let the cash burn a hole in our pocket.”

Perez is no stranger to acquisitions. In his first year as ceo at S.C. Johnson, he led the company through a $1.2 billion purchase of the Dowbrands from Dow Chemical Co., which included Ziploc, Saran Wrap and Scrubbing Bubbles.

Growing Nike and all the new brands internationally is a key focus for Nike going forward, company executives and analysts said. The U.S. accounts for about half of total revenues of $12.3 billion, and Nike has initiatives to grow its business abroad, including the recent establishment of Nike Russia and more focus on China.

In the U.S., Shanley said Nike faces challenges because many retailers are cutting back on the number of brands they carry and some “have indicated that they don’t want to add more money to Nike.” However, Shanley noted that the company has started making exclusive products for stores such as The Sports Authority and Finish Line.

Nike also is adding to its roster of athlete endorsers, a hallmark of Knight’s marketing strategy. Serena Williams, who became a Nike-sponsored athlete last year, is the centerpiece of a new campaign this spring.

Analysts also see potential to continue growing Nike’s women’s business. Nike recently realigned its women’s fitness products division and introduced a line of fitness dance products, and has started a women’s-only catalogue, Nikewomen. It has also been growing the Nikewomen store concept, of which there are now seven.

“We also think an area we’ve only scratched the surface is the women’s fitness category,” said Charlie Denson, co-president of the Nike brand, on the recent conference call.