Les Envies aims to create must-have pieces that draw from the house’s Parisian codes, while priced at around 20 percent below the runway collection. 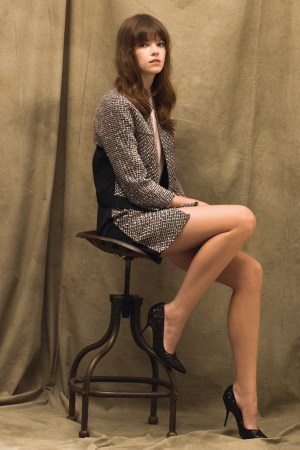 When Nina Ricci launched a capsule collection called Les Envies for spring, it aimed to create must-have pieces that draw from the house’s Parisian codes, while priced at around 20 percent below the runway collection. The inaugural season was picked up by retailers including Barneys New York, Neiman Marcus, Net-a-porter and, internationally, Harrods, Harvey Nichols and Mytheresa.com.

On Monday, the Puig-owned brand brought the fall 2013 lineup, which is also designed by Peter Copping, to New York to show to buyers and editors. (A Paris presentation of the same collection is being planned during the January haute couture.) Priced at suggested retail from $435 for tops to $1,990 for a gown, the lineup features many Ricci touches, like ultrafeminine lace details and pretty sorbet hues. A white lace A-line dress was shown under a pink cardigan, and a seafoam green cardi-and-T-shirt combo was teamed with a black lace skirt. A flower scribble print added to the clothes’ innocent charm.