The year 2019 saw a return to more pared-back and tailored looks on men's and women's runways, pushing streetwear out of the limelight.

This was the year of the suit.

From Kim Jones’ elegant silk sashes on evening suits at Dior Men to Haider Ackermann’s pearl number made viral by Timothée Chalamet at the Venice Film Festival, men’s wear saw the return of a more tailored and put-together look for both seasons presented in 2019.

Buyers at the Paris men’s shows in January unanimously called out a sartorial shift: Tailoring returned as a fashion statement. Shown often in black, gray, or a heritage men’s wear fabrication, the suit was updated with fluid constructions and personal styling to feel modern for today’s consumer, with designers exploring new cuts, fabrics and styles to reinvent the age-old classic.

Forget Savile Row-type three-pieces: the suit in 2019 explored new territories and flirted with gender fluidity, as demonstrated by Paris-based Ludovic de Saint Sernin’s see-through organza numbers. When shown on the runway in Paris last June, the transparent organza suits were stuck to the skin of the drenched models, who were sprayed with water before stepping on the catwalk, suggestively clinging onto every curve — a whole new approach to tailoring, unarguably NSFW.

At Louis Vuitton, Virgil Abloh explored tailoring for both seasons, albeit in notably different directions. The designer sent a sea of gray tailoring silhouettes down the runway for fall 2019, including new suited propositions in the form of double jackets — a short jacket with an elasticated waistband worn over a longer sleeveless underlayer — and a Zoot Suit jacket with concealed buttons. 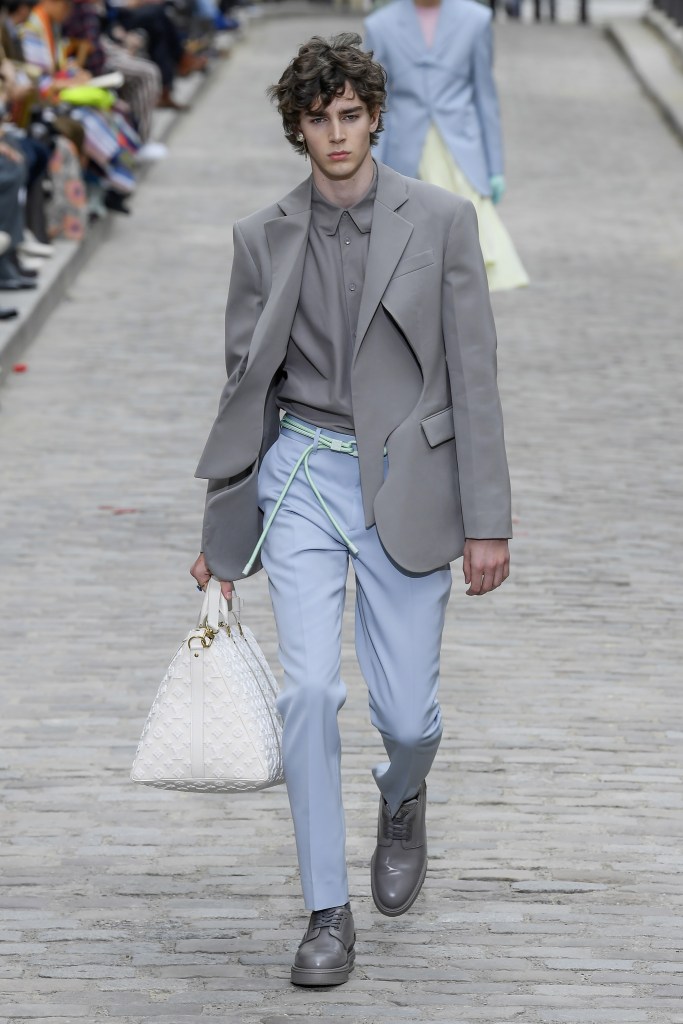 For spring 2020, presented in June, soft tailoring was done in a muted pastel palette, with wavy cutout panels adding movement to the front of formal jackets, while the designer embroidered lace motifs representing Notre-Dame and the Pont Neuf on the back of a businesslike gray jacket. “I always wanted men’s wear to feel as expressive as women’s wear does on the red carpet,” Abloh told WWD backstage.

Jones at Dior Men gathered rave reactions from buyers in Paris for his fall 2019 collection. “Kim Jones’ Dior Men was a beautiful study of sophistication in tailoring and sportswear,” said Bruce Pask, men’s fashion director at Bergdorf Goodman and Neiman Marcus, in reference to the elegant broad sashes — made of velvet, technical satin or zebra-printed mink — looped through tailored side-fastening jackets and coats, shown on static models who were ferried past guests on a 250-foot-long conveyor belt.

Other designers including Abloh’s Off-White, Valentino and Dries Van Noten exhibited a definitive shift toward the elegant and elevated: the runways offered a series of tailored jackets to be worn from day to evening to weekend, blending fashion and functionality in nontraditional suiting with a modern-day edge. Almost all of the designers presented blazers in their collections, noted a buyer.

But will end consumers make the switch from street informal to sophisticated suits?

“It’s true that there has been a real return to tailoring codes in the masculine wardrobe,” said Mathieu de Ménonville, founder of Paris-based men’s wear label Editions M.R. “But it’s a whole new way of suiting up: Designers are currently rethinking suiting in a non-corporate, non-business-oriented way, keeping the luxe materials and craftsmanship of suiting but adapting it to a modern silhouette.”

The twist lies in breaking with formalism: away from the catwalk, in real-life Paris, a high-waisted pair of suit trousers will be worn with a sweater instead of the full suited look, for example. 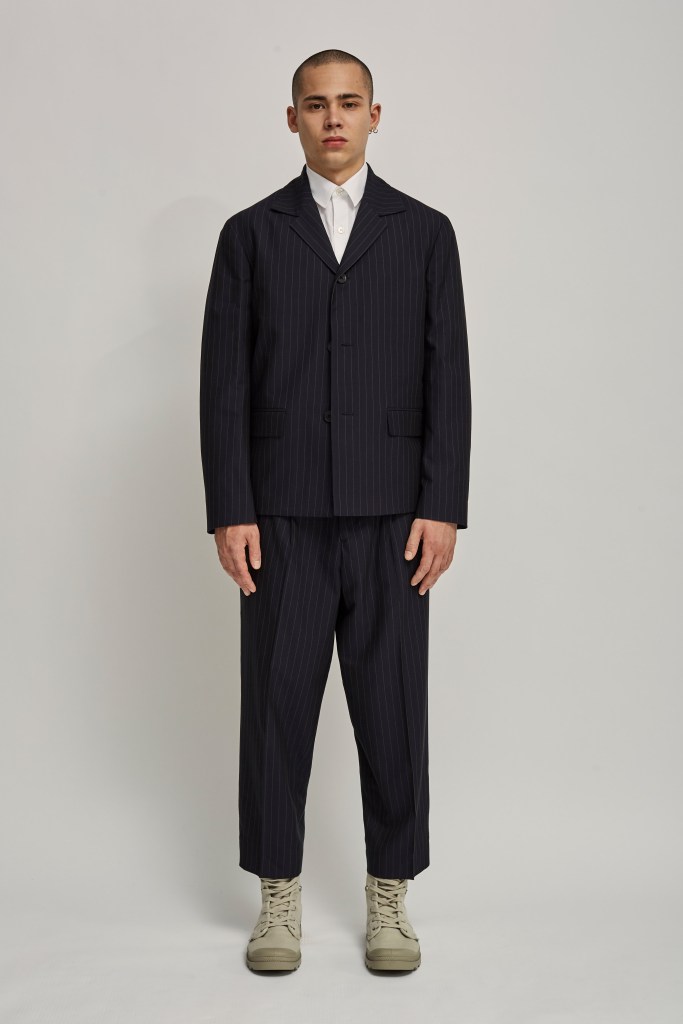 A look from the Editions M.R spring 2020 collection.  Courtesy

Editions M.R’s first collection under the creative direction of former A.P.C. designer Louis Wong, presented in June, featured a number of full tailoring looks — suits worn with matching coats in the same material — in a tongue-in-cheek spin on the formal look, which the designer playfully dubbed “overformal.” Wong also used textiles usually found on tailoring looks, such as herringbone tweed, and applied them on unexpected pieces, such as sporty jackets and overshirts.

Streetwear offerings effectively waned on the catwalk in men’s and women’s collections after years of ultra-visibility — does that mean it’s gone for good?

“I would definitely say [streetwear] is gonna die, you know?,” Abloh told British fashion magazine Dazed on Dec. 17. “Like, its time will be up. In my mind, how many more T-shirts can we own, how many more hoodies, how many sneakers?”

For retailers — and other brands in the category — it’s more of a slow fade into normality than a sudden death. “Streetwear is a part of our vocabulary now,” said Jeffrey Kalinsky, vice president, and fashion director of Nordstrom, reacting to the Paris men’s shows in January.

“I don’t think people are going to stop buying hoodies and sneakers,” he explained. “That’s going to continue because it’s part of their wardrobe, and for sure there are lots of great streetwear options in the market. But it’s nice to offer guys really chic clothes again. They’ve been asking for it.”

Even Vetements, the pioneer of oversize, logo-hungry, casual-inspired silhouettes, showed more pulled-together looks on its runways, taking a step back from its previous street-savvy ensembles — there wasn’t a sneaker in sight at the brand’s spring 2020 runway show, presented in a Parisian McDonald’s in June. 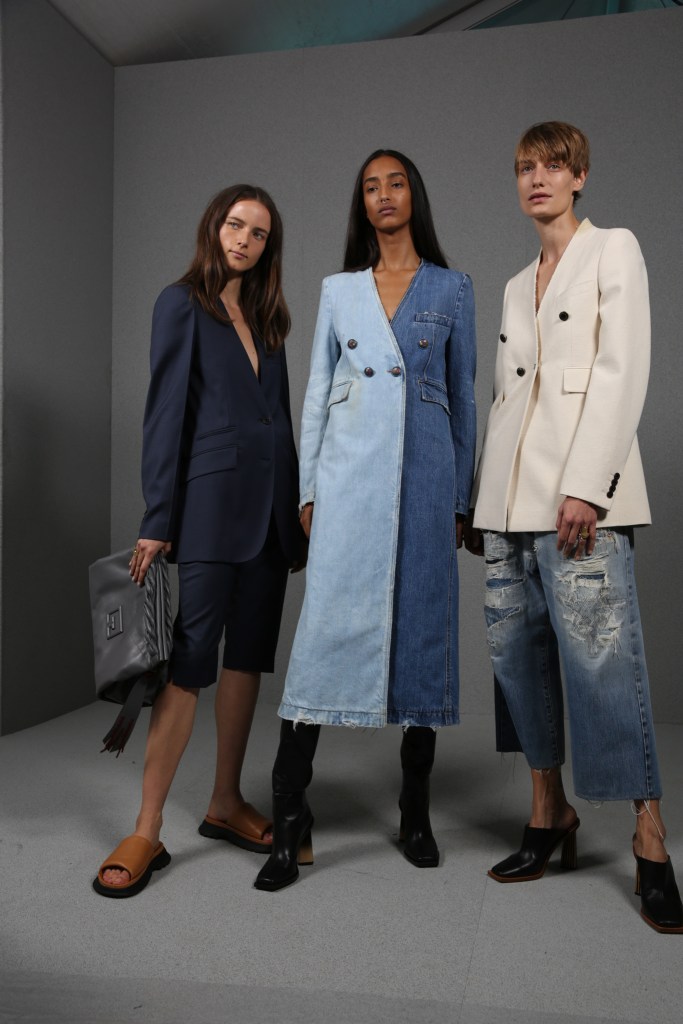 The suited-up vibe also translated into women’s collections. The spring 2020 collections presented in September saw a shift toward a cleaner, more pared-back aesthetic. In Milan, designers focused on relaxed suiting in an array of fabrics, even featuring waistcoats. Jumpsuits and boilersuits prevailed and looked especially luxe from classicists Loro Piana, Salvatore Ferragamo and Max Mara.

In Paris, suiting was also back in a big way. While Alexander McQueen, Dries Van Noten and Saint Laurent focused on structure and opulence, Chloé, Stella McCartney and Givenchy — three houses helmed by women designers — presented a more relaxed vibe, in keeping with this year’s massive return to a simpler silhouette.

The fashion expert cited the effortless looks at Nina Ricci, designed by creative duo Rushemy Botter and Lisi Herrebrugh. “It was completely fitting with the time — unfussy, no frills looks that were contemporary and easy to wear.”

As well as a creative use of neutral tones — spotted at Prada — and the return of the chasuble dress, buyers lauded the use of white on the September runways. The hue was massively spotted at Valentino, where the 12 first opening looks were made of immaculate cotton poplin, as well as on the Loewe runway, where trailing hemlines were rimmed with broderie anglaise. 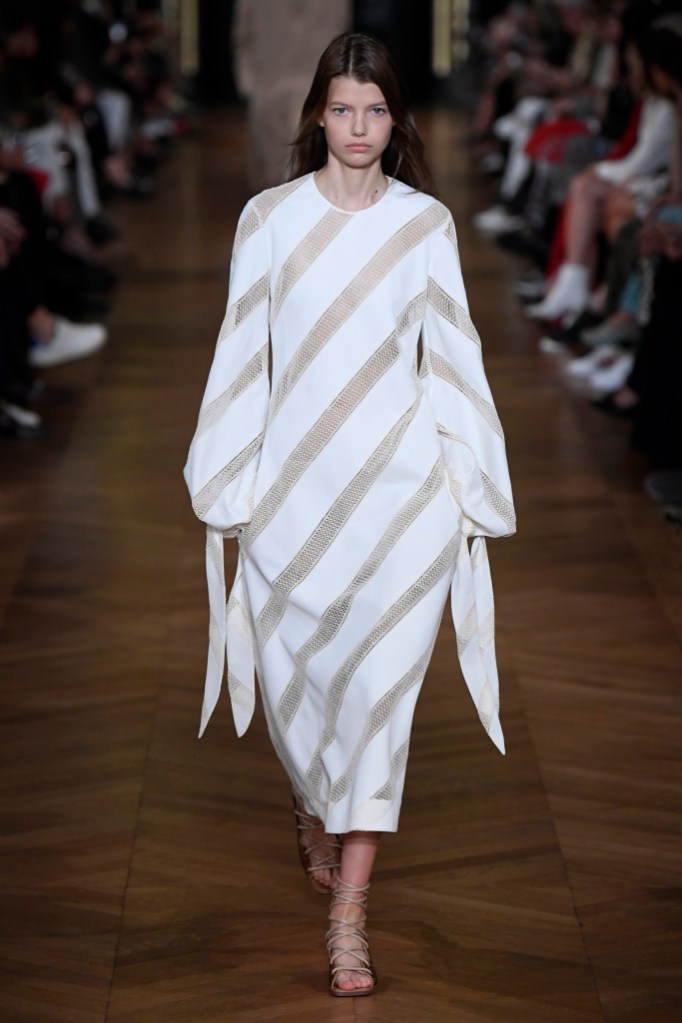 This new strain of minimalism emerged as one of spring’s most compelling directions, wrote WWD’s executive editor Bridget Foley. It wasn’t about clinical austerity, but about saying much with elegant discretion. Often, designers incorporated subtleties of cut or detailing — bodice-tucking, asymmetry, a contrasting border — to keep the clothes as interesting as they were simply chic.

The resulting looks were subtle, even quite spare. Could this be interpreted as a sign that the fashion world is gearing up to a return toward Nineties minimalism?

“I wouldn’t necessarily call these simpler silhouettes minimalist — it’s a far cry from the Nineties,” said Wilhelm. “But it’s true that we are seeing a lot more pared-back looks and a lot of purer fabrics.”

According to the fashion expert, this can be linked to the rise of eco-consciousness, which progressed massively in 2019.

“People are more aware of the material with which a product is made,” said Wilhelm. “End consumers are increasingly paying attention to how clothes are made. There is an important societal context explaining this return to simplicity: people want to understand what goes into their clothes.”

The simpler, the better.