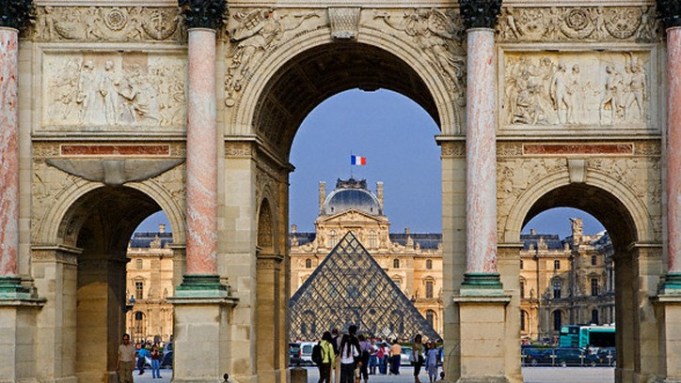 Some eras end loudly. In Paris, a fashion era closed last March with so little noise no one noticed at the time: The fall 2010 collections marked the end of the Carrousel du Louvre as the major sanctioned venue of the Chambre Syndicale. Unlike the countdown to the final season of Seventh on Sixth, which lasted about as long as a Cher farewell tour, there was virtually no advance chatter. Rather, on Monday, the organization’s president, Didier Grumbach, confirmed in a text message to WWD that the governing body of French fashion has terminated its relationship with the site, effective immediately.

Regular attendees of the Paris collections know that the abandonment of the Carrousel by the cool and mighty has been a slow, steady bloodletting, whatever chic aura the venue once had — and back in the day, it was considerable — gone years before the termination of the relationship. Word now is that the Chambre is looking for a multishow venue in the center of Paris interesting enough to recapture some of the city’s heavy hitters who ultimately fled the marbled labyrinth beneath the famous museum.

In late 1993, as the fashion world anticipated the opening of the Carrousel du Louvre, those then on the Paris show circuit (myself not among them) were all abuzz with speculation about how this unification attempt, clearly inspired by the Italians’ more down-market Fiera venue that managed to attract many of the major names of the day, would play out. The purpose was to centralize the Paris shows, then scattered across the city, and move those shown under tents in the often muddy grounds surrounding the Louvre to an indoor space worthy of the world’s best fashion. What better place than beneath the hallowed museum itself? “They’ll love it for a while,” one WWD editor, who then regularly made the show rounds, said. “But it won’t last; fashion people get bored too easily.”

First up to show — who else? — Karl Lagerfeld, who inaugurated the location with his spring 1994 Chanel couture collection, a lineup of 101 looks (yes 101; fashion has changed in more ways than one these past 16 years) that ranged from calm trouser suits to mad ballerinas complete with Surrealist masks. But, save for the occasional cameo appearance by Lagerfeld’s Chanel or John Galliano’s Dior, couture wasn’t long for the place. From the get-go, many considered the $100 million project, spearheaded by then-Chambre Syndicale president Jacques Mouclier, too mundane for the genre, given the accompanying tourist-luring shops and food court.

For a while, however, it was a rocking place come ready-to-wear, attracting countless major designers. Not for long. Inevitably, boredom did set in (providing a major argument against ever again sinking money into a site thought of as permanent). First one designer left, then another, then another, too often dragging the audience to the outskirts of Paris, thus making the schedule ridiculously dependent on the city’s typically horrific traffic. While sometimes one understood the need for a far-off venue — the extravaganzas of Galliano and Alexander McQueen come to mind — more often, you’d plunk down on a splintery wooden bench way out in some freezing God-knows-where and wonder if there mightn’t have been a similar crusty old dump a little closer in.

This is not mere retrospective grousing. No doubt about it, we are a complaining lot, but some complaints have merit. As the Chambre Syndicale investigates and pitches venue ideas to its members, let’s hope that keeping to locales in the center of Paris is a priority. When successive shows are in close proximity to each other and to where most of the audience works or resides while in Paris, those whose job it is to see the shows get to see more of them. And they’ll be in a better mood while doing so.

Monday at Milk Studios here in New York offered a perfect case in point. No fewer than five European houses — Lanvin, Celine, Givenchy, Nina Ricci and Pucci — showed resort in various of Milk’s accommodations. Each made the studio space his or her own to the degree that personalization was desired. Alber Elbaz showed his fabulous Lanvin in a moody black space in front of three aged gilt mirrors; for his upbeat Pucci, Peter Dundas went delightfully beachy in the natural-light penthouse studio, modern stark white sofas strewn with printed pillows in marine blues. Editors and retailers had only to wait for the slightly sluggish elevators, making it crazy easy for all to do their jobs, which is, first and foremost, to concentrate on the clothes. Would that every collection season now followed suit.