London designers veered away from flashing the flesh this season, with covered-up creations dominating the city’s runways. 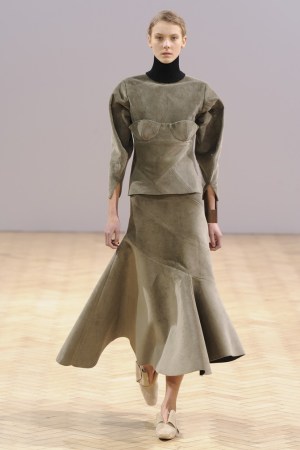 London designers veered away from flashing the flesh this season, with covered-up creations dominating the city’s runways.

The sense of propriety even found its way onto Tom Ford’s runway, a designer best known his va-va-va-voom creations. Ford’s fall collection was replete with such sleek, sober looks as a black velvet, high-necked shift and a full-length cashmere gown with a built-in poncho, worn by Stella Tennant.

Reasoned Ford: “When you go very far one way, you get in a mood to swing back the other way.”