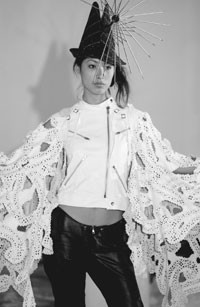 As 2005 draws near, proof of China’s emergence as a market can be found in the nation’s trade fairs, which are growing not just in number, but also in size.

Intertextile Shanghai (Oct. 26-29, at the Shanghai New International Expo Centre), for example, will be divided into two fairs this year, one for apparel textiles and the other for home textiles. The apparel side will boast many mainland Chinese exhibitors showing a range of basic fabrics for the domestic market. Katy Lam, general manager of trade fairs for Messe Frankfurt Hong Kong, which organizes Intertextile Shanghai, said the move to two fairs was necessary. “It used to be one platform, but it just got too big. We had problems expanding.”

Likewise, fairs in Hong Kong, which cater to a more international audience than those on the mainland, are seeing large increases in visitor numbers, due mainly to rising numbers of buyers from China. “The Chinese market is growing and growing. Buyers from the mainland need to source products, and in Hong Kong they can find products from all over the world,” said Anne Chick, senior events manager for the Hong Kong Trade Development Council.

Hong Kong companies and their foreign partners, in the meantime, are taking advantage of new regulations that allow them to enter the China market tariff-free. “Hong Kong companies are fleet of foot,” said Michael Duck, managing director of CMP Asia, which organizes such shows as the Asia Pacific Leather Fair and the Hong Kong Jewelry and Watch Fair. “They are aware of what’s happening. There is not manufacturing [in Hong Kong], and companies have learned to move quickly [in China]. It’s why there are so many sourcing centers [in Hong Kong]. As for 2005, many countries may not be fully aware of the situation. They soon will be.”

And to that point, manufacturers, retailers, buyers and everyone else with a stake in fashion’s future seem to be of two minds about China. Should they worry that when quotas are eradicated China will flood their markets with cheap goods, or should they be more concerned that China’s economy is overheating, rendering business in the country less viable?

As Stephen Roach, chief economist for Morgan Stanley, told China’s officially sanctioned newspaper, The People’s Daily, “The global impacts of the coming slowdown in China’s economy cannot be taken lightly. When today’s Chinese economy sneezes, Asia and possibly the rest of the world could well catch a cold.”

Indeed, while China’s Ministry of Commerce reported that the total import and export of textiles and clothing grew more than 22 percent in the first quarter of this year, exceeding $22 billion, the talk in China was not of celebration, but of inflation. The central government is so concerned about the possibility of an overheated economy that the People’s Bank of China, the country’s central bank, has imposed a moratorium on lending to stop the rapid growth of credit.

As for the likelihood that cheap goods from China will flood the world’s markets when quotas are dismantled in 2005, many in the region are taking a long-term view. “Chinese prices are low, and the quality [of their goods] is improving, but the standard of living in China is getting higher and higher, including salaries,” said Messe Frankfurt’s Lam. “In fact, the prices in China cannot remain so low for so long. The government is considering the value of the [yuan] as well. It’s not necessarily true that China will flood the market, because gradually Chinese prices will get higher.”

Other considerations are the lessons learned from last year’s SARS epidemic, including the need for a diverse production base. “Obviously 2005 and 2006 will be very important for China and for manufacturers in the region,” said CMP Asia’s Duck. “Sourcing companies and brands will be looking at not having all their eggs in one basket so that any situation — economic or political — won’t affect production.”

But industry associations based throughout the region are not waiting for SARS-fearing Americans and Europeans to set up factories in their countries. Instead, they are looking for ways to compete with China. Some, like Thailand and Hong Kong, are promoting themselves as design centers. Others, including Taiwan and Korea, are emphasizing the quality and added value of their fabrics. “Adding value is the only way to compete with China. It’s how they’ll survive,” said Messe Frankfurt’s Lam of the region’s textile producers. “They have to differentiate themselves somehow because competing with China purely on price is impossible.”

Others are waking up to China as a potential market. For example, the All China Leather Exhibition in Shanghai is set to have India as its focus country for the first time. “Not so long ago, the Indians were so concerned about the competition [from China] that they didn’t see China as a market,” said CMP Asia’s Duck. Likewise, companies from South America will be joining the Asia Pacific Leather Fair in record numbers this autumn.

Here’s a further roundup of what visitors to Asia can expect at this autumn’s fairs:

Hong Kong Fashion Week (July 13-16, at the Hong Kong Convention and Exhibition Centre) will be even bigger than last year. More than 550 companies are expected to participate, most with an eye to attracting American, Japanese and mainland Chinese buyers. The fair’s very popular and successful Asia Pacific Designers’ Showcase has been renamed the International Fashion Designers’ Showcase and will feature more than 30 fashion designers from around the world, including participants from Thailand, Indonesia, Vietnam and the Philippines. Korean and Hong Kong designers will have separate shows, and for the first time, Indonesian designers will, too. Innerwear buyers should note that HKFW will have a separate Bodywear and Innerwear Zone featuring swimwear and lingerie. There will also be a Bridal Zone at the exhibition.

Interstoff Asia (Oct. 6-8, at the Hong Kong Convention and Exhibition Centre) has become the place to go for functional fabrics. The Taiwan Textile Federation runs an interactive display area where buyers can test the performance of textiles. This year’s display will be larger and even more hands-on. Also at Interstoff, there will be a Designers’ Gallery, where buyers and manufacturers can meet textile designers and view a display called Fabric to Fashion that demonstrates the ultimate use of various textiles. Seminars held over the three days of Interstoff Asia will cover design, marketing and technology, as well as the all-important trend forum.

Last year’s rebranding of the Asia Pacific Leather Fair as Fashion Access (Oct. 6-8, at the Hong Kong Convention and Exhibition Centre) has led to an increase in the number and kinds of products on offer. So besides leather handbags, shoes, travel goods and garments, there will also be a variety of lifestyle products in myriad fabrics, including many — like pineapple fibers — unique to Asia. Expect lots of ethnic looks. Also, the second APLF Awards will be handed out for best products at the show. The big question is whether or not the Italians will rejoin the strong Spanish presence in Top Style Hall, where designer shoes are sold.

Invista will also be on hand at Intertextile Shanghai. Look for a contingent under that banner in the International Hall, home to more fashion-forward textiles.