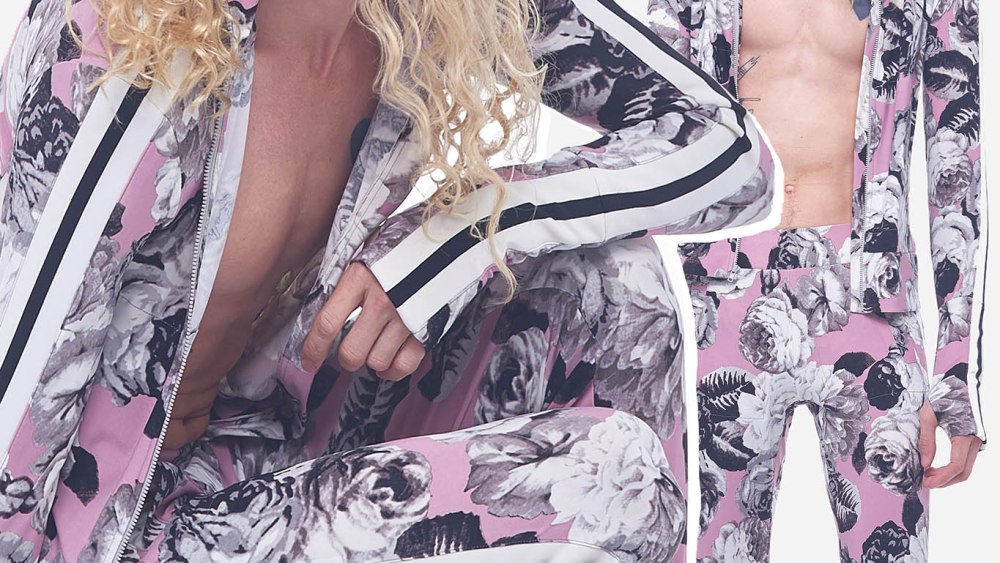 Norma Kamali remembers well the free-spirited, anything-goes Seventies. And today isn’t all that different, with its gender-fluid, whatever-works-for-you ethos. So the designer shot her spring collection on both a man and a woman and the result, she said, is “hot and fabulous.” Her striped jumpsuits, printed denim jackets and skinny knit pants, floral tracksuits — and even her trademark parachute skirts — work as well on a guy as on a girl. For Kamali, it speaks to a man’s unspoken desire to embrace his feminine side, at a time when such a statement is not only acceptable, but trend-right.

WWD: Did you ever do men’s wear before?

WWD: When did that trend stop?

N.K.: The truth is is that AIDS stopped a lot of that and there were socioeconomic situations in the city that were also impacting fashion and direction. But there’s been nothing as free-spirited and creative and interesting as that since then.

WWD: The Seventies was a pretty creative time.

N.K.: The Seventies do have to be credited for being the most creative period in fashion. I have been there for all these decades and I promise you that’s a fact. Having said that, in the last year, year-and-a-half, we’ve all seen all these feelings about collections that don’t have gender, that are gender-fluid, gender nothing. I like that that’s happening, and we’re seeing [more men] wearing our clothes in editorials. This is like the universe telling me to go back and pick up where we left off because the time is right.

WWD: So the collection is gender-neutral.

N.K.: This is not about gender. This is not a line for gay men, it’s not a line for straight men. It’s a line for men who want to be creative. It’s so exciting as a woman to see guys having a great time and wearing clothes that are the same, sharing their wardrobe. That’s just something that happened in the Seventies.

WWD: Your look book for the spring line features a couple with a very distinct appearance.

N.K.: Veronika [Vilim] and Adrian [John Hurtado] are a couple that we love so much. Veronika is a model that we use and this is her boyfriend, and they share clothes. I invited him to be a part of our shoot. There’s a shot of Adrian wearing fringed pants with a ruffled top and a parachute skirt over it and he looked amazing. His physical body was jumping and doing boy things, but yet he looked so feminine and fabulous — and it was so sexy. I was doing fringe pants in the Seventies, but is it not better on a man?

WWD: How are you addressing the sizing?

N.K.: Most of what I do are knits so fit is not a thought. When I grade everything up, we’ll match our grades with men’s grades so we may need to add a half size, but basically, I’m not going to do a separate men’s line. But I think the bigger story is that this is energizing to our industry. There don’t have to be men’s departments and women’s departments — sure, for bras or men who want structured suits, but everything else can be a blurred line, the way Generation Z looks at life. There’s no gender, no race, no separation of beliefs and that’s what we’re saying. This is not fashion, it’s more about personal creativity using clothes that we like.

WWD: You’re convinced men will embrace this like they did in the Seventies?

N.K.: Guys just want permission. Women are fine showing their masculine side: we can be tough, we can work out, we can wear jeans or a man’s suit. We’re OK with that. But guys are desperate to show their feminine side, they’re ready. I think my clothes lend to this because they have that quality, but it’s not my collection so much as the idea that it’s OK and you can put together a skirt over pants with a floral jacket. All of it works.

WWD: Are you going to market this to men or try to sell it to men’s retailers?

N.K.: Yes. If retailers have hard lines on how they present their lines, then that’s not where I should be. But e-commerce can tell any story you want. And the more we reach out to our accounts, they say, “The guy who runs our company wears women’s clothes all the time, so bring it on.” So it may not be for everybody. This should be organic. If it’s right, then you do it.

WWD: Do you think it’s mainly young people who will embrace this concept?