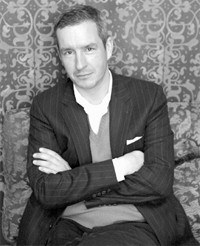 NEW YORK — If you were to cast Dries Van Noten in a movie, the role of fashion designer would probably not be the first choice. In his comfortable-looking, chalk-striped jacket and nubby V-neck sweater — all worn with a slightly serious, yet unassuming air — the Belgian designer seems more like a natty young college professor. But in real life, a professor would probably opt for a muted forest-green sweater over the bright grassy one Van Noten wears.

Van Noten was honored Thursday night at Fashion Group International’s 20th anniversary Night of Stars, along with Donna Karan, Dolce & Gabbana’s Domenico Dolce and Stefano Gabbana, Jean Paul Gaultier and milliner Philip Treacy. For the occasion, he wore a smart tuxedo of his own design with an antique waistcoat from the late 1800s.

However, while sitting down for an interview at the Carlyle Hotel the day before the gala — only a couple of hours fresh from the customs line at JFK — he says he feels “a bit dizzy” from the flight. “I’m really very honored to be selected for a team like this,” he says in his lilting Flemish accent. “And it’s nice to be appreciated for something you really like to do.” While the others on the list aren’t exactly shabby, it must be a sweet bit of perspective for the designer to receive accolades alongside Gaultier, whose shows Van Noten used to sneak into with counterfeit invitations as a young fashion student at Antwerp’s Royal Academy of Art.

“That was a long time ago — ’81, ’82. It was a previous life,” he laughs. “It was a lot of fun because Gaultier and all those designers had very creative invitations. So you had to be very clever to copy them.” One season, Gaultier’s invite took the form of a large button. The closest approximation that Van Noten and his friends could source was the plastic lid of a yogurt container. “The evening before we left for Paris, we had 16 one-liter pots of yogurt. We were copying the invitations and eating yogurt the whole time,” he recalls. Did it pass muster? “Yes, it worked very well.”

But time is a funny thing. While 1982 may seem like a previous life, 20 years can also pass in a flash. And 1985, the year that Van Noten launched his collection in a group show of Belgian designers in London can feel like yesterday. “I still really like what I am doing, and my team shares the same passion,” Van Noten says. “It feels like we just started and that it’s just a bunch of old friends who started working together recently when really, it’s like 18, 19 years.”

From his very first season, Van Noten scored orders from Barneys, Whistles in London and Pauw in Amsterdam. He still remembers the thrill of finding out that a Barneys buyer was coming in to place an order. Van Noten’s business, which last year did $30 million in sales, has grown quite a bit since then, with the designer managing to stay self-financed all the while. While in that context he is fiercely independent, nothing about him evokes the ferocity that some assume is necessary to survive in the fashion business. Instead, Van Noten is more politely self-sufficient, so much so that while the corporates used to come knocking, they don’t anymore. “I think it’s clear now to everybody that we like the situation which we are in, and we are going to keep it that way,” he says. “I just would not function in a situation like that — with someone looking over my shoulder.”

Being independent has allowed Van Noten to do things his own way, whether taking time and money to create his precious fabrics or to work on side projects. While he does produce shoes, bags and belts, he has often said that he would never introduce a cash cow — an expanded accessories line or fragrance — for fear of taking the emphasis off the clothes. Even though he enjoyed designing a children’s line for several years, he ended it in 1999 when stores started asking for things that weren’t quite Dries. “For me, children’s wear is like little princes and princesses,” he says. “But [stores] were asking for things like T-shirts that say ‘Dries Van Noten’ because that’s what the mothers were buying. I really hate things like that.”

Since Van Noten is very involved in the day-to-day details of his collection, his visit to New York clocked in at less than 48 hours, and he admits that it took a bit of convincing on the part of his publicist to get him here. On his to-do list while here: visit the four stores which carry his line — Barneys, Jeffrey, Linda Dresner and If — leaving time for little else.

Although his early collections were inspired by travels to India, Turkey and Morocco, these days the designer stays close to his home base in Antwerp. He says he finds his current inspiration there, whether in an African woman who might wear a Western raincoat over her traditional dress or in checking out the latest contemporary art. The ideas also flow while he tends to the gardens at the 18th-century castle that he lives in just outside the city.

Although he no longer needs to resort to counterfeit invites, after his shows in Paris he hightails it back home. And why not? To hear Van Noten tell it, the city sounds like a fashion Eden where there are many designers, but since each has a strong identity, the atmosphere is one of camaraderie rather than competition. He has even helped to finance the collections of younger Belgians, including design team AF Vandevorst and Angelo Figus. And at AF Vandevorst’s first Paris show at the fall collections in 1998, Van Noten sat in the front row along with Ann Demeulemeester and Walter Van Bierendonck, two other members of what was known in the late Eighties as the “Antwerp Six,” the group that originally put the city on the fashion map. Van Noten doesn’t chafe at being categorized with the many other Belgian designers, saying that they often trade notes on stores and fabric manufacturers. “We are all colleagues,” he says. “We really work together in that way.”

In 1999, Van Noten was forced to rethink his business after the death of his longtime partner Christine Mathys. He was said to be devastated both personally and professionally. While he contemplated closing his doors, he eventually decided to stay the course and bought a six-story shipping warehouse to centralize his operations. Creatively, he found himself pigeonholed as a designer who could only do ethnic looks. He told WWD in 2000 that he got bored “working exclusively with countries or historical periods,” and was turning to modern art for that spark. But he has since made peace both with his sense of aesthetics and continuing the business without Mathys. “The whole atmosphere and structure of the company was built by Christine and me,” he says. “It’s a very positive heritage. Fashion is a constant evolution, but the heart of the company is still that.”

And even while he felt temporarily trapped by the ethnic references for which he is known, Van Noten’s work has always gone beyond copying a specific time, place or tribe, as the case may be. Instead, he is a master of the mix — layering colors, prints and textures as well as cultures and eras, both literally and figuratively. His recurring motifs, while drawn from his foreign travels, also reflect a special blend of elements — tweedy men’s wear, romantic Victoriana and even a touch of the utilitarian. Van Noten’s recent spring show was packed with prints and embroideries, but he also experimented with tone-on-tone looks, a far cry from his usual unexpected color combinations. “In August, we were panicking a bit because when you are used to getting a lot of effect from putting pink and green together, seeing everything in white or blue-gray — you lose some of that effect,” he explains. He eventually worked through the dilemma by adding volume in girlish ruffles.

Despite his lingering reputation as a member of fashion’s increasingly difficult to define avant-garde, it seems that in fact, mainstream fashion has swung his way with the current emphasis on femininity and embellishment. But as with everything, he calmly takes it all in stride. “I was a little bit less happy during the minimalist period, but now people are more interested in fabrics and tradition and all these things.” he says. “Every designer has his time, and then it goes away. But I know after 20 years, if you continue to do what you like, your time will come back.”