Not Another Teen Actress

In Young Hollywood, there are two types of actresses: the pretty face and the real deal. Evan Rachel Wood appears, at only 17, destined to be both.

She’s the rare teen actress whose ability to convey maturity, innocence and intelligence... 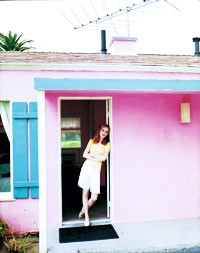 In Young Hollywood, there are two types of actresses: the pretty face and the real deal. Evan Rachel Wood appears, at only 17, destined to be both.

She’s the rare teen actress whose ability to convey maturity, innocence and intelligence all at the same time has attracted

A-list filmmakers, from Ron Howard to Brad Pitt and Jennifer Aniston’s production company, Plan B. In a town overflowing with superficial beauty and fleeting fame, Wood looks like she’ll be more Jodie Foster than Jennifer Grey.

Although she got her big break in the Emmy-winning television drama “Once and Again” in 1999 at age 11, Wood quickly moved on to a string of quality, if far from box-office blockbuster, films with high-profile co-stars, including “Thirteen” with Holly Hunter and “The Missing” with Cate Blanchett. Her breakthrough performance in “Thirteen” earned her Best Actress nominations at the Screen Actors Guild and Golden Globe Awards in 2004. Next month, she’ll appear as Joan Allen’s daughter in “The Upside of Anger,” alongside real-life friends Erika Christensen and Kerri Russell.

But she’s not all serious thespian. Wood talks a mile a minute in a Valley Girl drawl and enjoys girlie pleasures like any other teen. You won’t find her toting the latest designer handbag from Kitson, but she always wears a small vintage diamond ring from her aunt. And as a teenager who nonetheless has ample opportunity to walk the red carpet — not just as a token PYT, but as a lead actress nominee — she’s been able to explore her growing interest in fashion with the ultimate wardrobe closet.

Wood may not be on designers’ speed dials yet, but her recent string of black-tie hits — in everything from Prada to Oscar de la Renta and Giorgio Armani — is quickly gaining recognition. Though even designers who dress her still can’t quite pin down her style as they do with teen star Mischa Barton, they keep sending the dresses in hopes of being the first to become her favorite.

Wood arrives at a photo shoot dressed in a brown T-shirt and jeans, clutching her iPod and a messenger bag. It would be easy to mistake the slight, initially shy girl for anyone else on the street, if it weren’t for her young publicist in tow.

“I used to really hate clothes and dressing up, but Jessica [Paster, her stylist] really gets peoples’ styles right away,” Wood says. “She’s good about giving you what you want but also making sure you aren’t making dumb choices. At the end of the day, she just says, ‘I think this is great, but what do you want to wear?’ ”

Says Paster, “The great thing about Evan is that she’s a real 17 year old. She’s experimenting. One minute it’s Marc Jacobs, and the next it could be Oscar de la Renta. But in her regular life she dresses like a teenager; it’s Chuck Taylors with jeans. It’s still too early to tell what direction she’ll go as an adult because she loves to run the gamut.”

Despite her film success and developing sense of style, Wood isn’t about to parlay it into becoming yet another multihyphenate money machine. Her nonacting interests are her pastimes, not commercial opportunities.

“I love to sing, but I can’t write songs, and I can’t play an instrument, so I probably wouldn’t ever get into that. And I don’t want to be another teen actress who’s got an album or a clothing line or a Barbie doll….

I think it’s kind of creepy,” she shrugs.

Will that hurt her career? Perhaps in dollar signs, but no matter — her dream is to be an Oscar winner. “For me, it’s all about the acting,” she confirms. Although this is an oft-repeated mantra in town, you get the sense she really means it.

Last month, Wood scored a double whammy at the Sundance

Film Festival, where “Upside” premiered along with the dark comedy “Pretty Persuasion,” which Wood carried as a manipulative teen exploring her sexuality. (The latter quickly sold to Roadside Attractions/Samuel Goldwyn Films, the indie studio that bought “Super Size Me” at Sundance last year, for a reported $1 million.)

“This is definitely one of my more challenging roles, because this girl has everything going on in her head, but she has no soul. Everybody thought it was going to be like ’Clueless.’ I’m sure they were a little surprised,” she says.

Indeed, audiences were also surprised to see Wood climax on camera and perform a seductive dance. “Yeah,” she laughs, looking down and blushing, “There were things I’d never normally do, and I was so self-conscious. Marcos [Siega, the director] has a rule that, if you’re uncomfortable, the entire crew has to do it first, so he made them pretend to orgasm before I had to.”

Siega says he didn’t know much about Wood when he cast her at age 14 and shot the film two years later. “What I wanted was to take Nicole Kidman or Jodie Foster and put her in a box and make her 16. That’s hard to find.”

But he says Wood understood the complexities of the role immediately. “It took a lot of maturity on Evan’s part to see through the dialogue on the page, and I never expected that of someone so young. You never see the young side of her when she’s working. But off-camera, she was just a 16-year-old, and that’s what surprised me most.”

For her third trip to Sundance, Wood was able to act her age, living in Uggs and The North Face jackets, a style she calls “much more me. I’m not a big shopper, but I love Urban Outfitters and Anthroplogie.”

She also managed to play Nintendo and go dancing at Marquee’s Main Street outpost and at the Motorola Lodge, where her mom accompanied her, along with actor pals Joseph Gordon-Levitt and Michelle Trachtenberg. “We left early enough so there weren’t too many drunken people stumbling around,” she says.

Wood is close to her mother, Sara Lynn Moore, a former actress and acting coach who moved Evan and her brother Ira David Wood IV (also an actor) from Raleigh, N.C., to Los Angeles eight years ago when she split from Wood’s father, Ira David Wood III, executive director and founder of Raleigh’s Theatre In The Park. Wood graduated two years ago from high school in the San Fernando Valley, where she still lives with her family.

Graduating early has meant that Wood has been able to add more films to her burgeoning career. She just wrapped “Down In The Valley,” an offbeat love story co-starring Edward Norton. And she’s set to begin filming a screen adaptation of the best-selling Augusten Burroughs novel, “Running With Scissors,” next month. Like most everything else on her résumé, it features an

A-list cast, including Annette Bening, Gwyneth Paltrow and Joseph Fiennes, but Wood is “totally freaking out” about her Emmy- and Olivier-award-winning co-star Brian Cox. As with her career choices, she prefers the more esoteric, choosing Imelda Staunton as her Best Actress Oscar pick for “Vera Drake” over more mainstream favorites Hilary Swank and Bening.

But Wood’s not a snob. She owns the “Showgirls” DVD. “It’s the VIP edition, with ‘pin the pasty on the dancer’ and everything!” she brags. And she’s addicted to low-brow reality fare like “Fear Factor” and “Project Runway.” “I’m normally against reality TV, but all the designers are really talented, and ’Fear Factor’ is just funny.”

She also believes that every type of actor and film has its place in young Hollywood. “Certain things work for certain people. I mainly go for movies that

I would enjoy watching, but I have nothing against [mainstream teen movies]. You have to have fun.”

The ability to flip back and forth between serious actor and precocious teen in the space of 5 seconds is what surprises many people who meet Wood. And it’s easy to forget that many things are still new to her, like playing the lead in a love story opposite the 35-year-old Norton.

“It was intense,” she says of working with the notoriously temperamental actor. “I mean, even Holly Hunter didn’t make me nervous. I’m sure a big part of it was that I’d never done a romance before, so it’s like going from zero to 100. But I was nervous for a week and then it all disappeared, and Edward Norton turned into Edward.”

Wood’s “Upside” sister Erika Christensen has known her for nine years and was once one of her mother’s acting pupils. “She has always been perceptive and intelligent, regardless of her age. She is fearless, and you can see in her work that she doesn’t shy away from anything,” Christensen says. “We haven’t been able to hang out much lately because we’re both working, but we chat about the actors we worship and how cool it is that we’re working together.”

Actually, Wood stays in touch with many of her co-stars who have become friends. “I still see the cast of ’Once And Again’ — they’re like family,” she says, including her one-time co-star Barton. “I am friends with Mischa, but I never see her anymore, because she’s so frickin’ famous now. When I run into her we’re like, ’Hey, remember when we did that show?’ So much is happening, it seems like it’s been 100 years.”

See article “Thanks for the Memories” for more on Evan Rachel Wood.