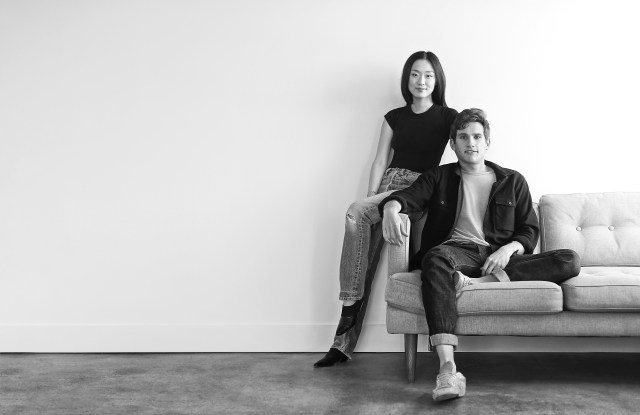 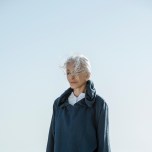 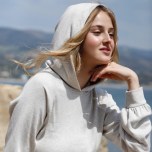 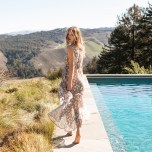 Two years ago, Robin Chang and Luke Goldstein were leading professional lives that most twentysomethings would envy — she was working as a women’s wear designer at Theory and he was a men’s product strategist. But a lunch with Sarah LaFleur, founder and chief executive officer of direct-to-consumer workwear label MM.LaFleur, changed their perspectives.

“At the time, seeing the business that Sarah, and other entrepreneurs like her in our industry, had built was incredibly inspiring for Robin and I — it opened our eyes to the disruptive potential of the DTC space and really gave us the courage to venture out on our own,” Goldstein recalled. “I had always felt that there was a huge opportunity to start a brand that was more relevant and meaningful for people my age, but needed a female creative collaborator, so I chased Robin down outside of our building one day.”

Chang added, “Fashion has always been this place of exclusivity that doesn’t make sense to us. For us, it’s always been about creating a wardrobe, a community and a brand that supports our generation as best as possible.”

In April 2017, the two cofounded Proof Collective, a DTC basics brand that uses technology to give natural fibers enhanced functionality. Their first item, the jean jacket, looks and feels like premium denim, but is treated with technology that causes it to repel water like a raincoat. The Made in Los Angeles product is comparable to brands such Rag & Bone, Mother or Re/Done that retail for twice the $195 price.

Other foundational categories such as T-shirts, fleece and sweaters, all with tech-enhanced fibers, will follow, but for now they are focused on gathering IRL feedback via pop-ups and engaging customers through compelling digital content that highlights success stories from creatives in other fields.

Apparel start-ups aren’t just for Gen Z entrepreneurs. L.A. is teeming with founders in their 30s, 40s and 50s who recognized a hole in the market and share a commitment to wardrobing those with similar needs.

Three years ago, Ali Hoffman, 30, a former Nylon and Refinery29 editor who was burnt out by the digital content cycle, saw space in the market for non-activewear items that career women could spend the weekend in.

“I wanted something as chic as The Row, that I could also fall asleep in, but not at The Row prices,” she said. “As someone who worked from home for two years, I was always looking for tailored yet comfortable pieces.” After sourcing a cotton gauze from which to fashion classic pajamas, she launched Sloan exclusively online in November 2016, where it found a following among multiple generations, including her godmother Barbara Guggenheim.

“There’s this dark side of fashion where so much gets tossed out, and I liked the idea of creating a company where that wouldn’t happen. It truly is a passion project, and it’s a lot of pressure, but because we’re a basics line I can take my time to perfect a product before we add it.”

Lyndie Benson had the same ethos when she founded Bleusalt in October 2017. “I wanted something as comfortable as sweatpants but that was a step up from that lazy look,” she said. At 55, the photographer and interior designer, who was married to musician Kenny G for more than 20 years, admits she didn’t need to work, but that she happily started at square one, learning as she went about manufacturing and product development.

“There’s a feeling right now that anyone can do anything,” Benson said. “It’s the wild, wild west. It’s so new that I don’t feel that anybody has it nailed down. I’m trying to get people to buy the softest Modal fibers on earth from a computer. How do you do that?”

Benson relied on her Malibu cohorts and friends such as Cindy Crawford and Kris Jenner to spread the word, and she recently linked with Patrick Dempsey, who designed a capsule collection for Bleusalt. She also offers free swatches to get people to buy product and has a small store presence on the Malibu pier.

For those in it for the long game, expectations are different. Venture capitalist Scott Carter, 47, took a studied approach when launching his first DTC apparel company, Kiln, this summer.

“Age is not an issue. You don’t have to be a 23-year-old with an idea that nobody’s thought of. For better or worse, that’s making it harder to create companies that have a Facebook-like effect,” he said.

To gain a competitive edge over the many other companies offering contemporary clothes, Carter invested in software to manage raw materials, inventory and sales to mitigate costly system upgrades down the road. He also eschewed throwing money at Facebook and Instagram because “with those platforms it takes you three months just to figure out who your customers are and how to reach them. The tools they give you are good, it’s just a long process.”

Kiln will host a fall 2018 preview event in West Hollywood later this month, and Carter noted that he’s not after celebrity placements. “I’m trying to cultivate a customer like myself, who’s looking for an alternative to the Zegna and James Perse I already own. If people can identify with that, I think they’re much more likely to become loyal customers.”