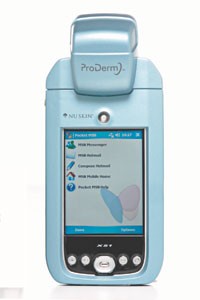 Sales representatives will use the portable unit to analyze customers’ skin and recommend personalized Nu Skin regimens, and track improvements over time.

“The opportunity to measure [improvement] was engaging and got more people interested in taking care of their skin,” said Lori Bush, president of the company’s Nu Skin division.

Since Nu Skin’s inception in 1984 as a direct seller of personal care products, its business has grown to include nutritional supplements and technology products.

After researching and testing medical imaging equipment for its Pharmanex nutrition business, the company saw an opportunity to leverage the technology for its Nu Skin division. Through clinical trials, the company found it could measure the results of its skin care products over time. Testing also showed that after consumers had their skin analyzed by the device, they were more likely to buy Nu Skin products.

“Once they got a closer look, they were more driven to engage in the category and wanted to start doing things to make a difference,” said Bush.

After performing the skin analysis, sales representatives direct clients to a select number of Nu Skin products, such as the five-piece 180 Anti-Aging Skin Therapy System, at $236. “We wanted to start people off on a skin care regime that’s comprehensive and simple,” said Bush. “Our goal is to maximize the appearance of healthy skin and direct them to a narrow range of products that are a good point of entry into skin care.”

During the two years the product was in development, Nu Skin partnered with leading optical and software engineers, along with skin care expert Zoe Draelos, a dermatologist and clinical associate professor at Wake Forest University of Medicine, who consulted on the project and assisted the engineers with writing the algorithms.

“Most skin imaging devices are large, bulky and expensive,” said Draelos. “This one you can hold in the palm of your hands — it’s compact and portable.”

Bush said the biggest challenge was “creating a pattern recognition algorithm that captured the attributes on the skin, without capturing artifacts,” such as classifying a mole as discoloration or a strand of hair as a wrinkle.

Bush noted that the advanced technology accurately captures images for the full range of skin colors.

Sales representatives can purchase ProDerm for approximately $600. Currently, ProDerm’s North American operation includes about 136,000 independent sales representatives. Nu Skin plans to offer ProDerm to a limited group of distributors this May, with a full broader roll out slated for June.

The company operates in 41 markets and relies on a team of more than 800,000 sales representatives to peddles its wares. Its largest market is Japan, followed by North America. The company plans to launch in Russia this spring. The company’s 2005 sales reached $1.2 billion, while the skin care sector brought in $484 million globally and approximately $40 million in North America, noted Bush.