With her baby turning one and her Nuala business set to celebrate its fifth, Christy Turlington has sized up her collection and is making changes. 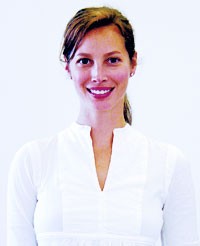 NEW YORK — With her baby nearing birthday number one and her Nuala business heading toward its fifth, Christy Turlington sized up the apparel collection and is making changes accordingly.

Nuala, a Puma-backed brand that started out as a yoga-inspired collection, is being repositioned as a lifestyle label for spring. Mahanuala, which was unveiled by Puma last year, is now its primary label for yogawear even though some of the Nuala pieces still could handle a downward dog. But Nuala also has a dress, jackets, camisoles and pants in its 30-piece spring collection.

During an interview last week at the Futurenet showroom, where Nuala is being sold, Turlington said, “When Nuala first came out, I had a very serious yoga practice, classes [at NYU] and meetings. It still has that capacity, but as the range grew, it became very difficult to put under the same roof.”

The new, two-tiered approach is better suited for stores that prefer to house yogawear and everyday attire on different floors instead of in the same area. Simplicity is an important part of Turlington’s mind-set these days.

As she was preparing for the birth of her first child with husband Ed Burns, she made a point of making her life “less and less complicated,” and that included paring down her wardrobe. Dressed in a three-quarter-sleeve white top, she said, “There’s nothing complicated about what I have on.”

That’s generally her dress code. Apart from jeans and the occasional splurge for a dress for a cocktail party or a friend’s wedding, Turlington said she seldom shops, opting to wear Nuala. She also has converted her 60-plus mother, her sisters and friends to the brand as a morning-to-night choice.

“More and more I think we need to make things that last but that are playful, fun and practical. That’s more important than having the thing of the season,” Turlington said. “My bag for fall is a diaper bag, too. I didn’t plan it that way, but it works. Some accidents just happen that way.”

If all this sounds like a recipe for children’s clothing, that’s pretty close. The designer would love to do a mini collection for children. While shopping recently for her 11-month-old daughter, Grace, Turlington found herself drawn to colors and styles that suit Nuala’s design sense. Yellow, turquoise, orange and red are among the shades in the cheerful collection.

After noticing a dab of broccoli baby food on her white blouse, she laughed, “I don’t do a lot of white anymore. It’s not what I choose to wear.”

With Nuala’s new “practical luxury” look, the former supermodel hopes to suit up women beyond their yoga classes and everyday chores. “The only thing I don’t ever envision myself making is eveningwear,” she laughed.

Despite that, a few items from the spring collection — a metallic tank, a floral jacket with satin trim and an airy silk georgette top — could easily be worn for a night on the town. “We wanted to take it up a notch. It’s happier and younger,” said Turlington, referring to her collaboration with designer Tina Lutz.

Next month her daughter will be in tow when Turlington helps launch the new collection in Tokyo at Estination and Isetan. Trunk shows and cocktail parties also are being planned for the U.S. Unlike Mahanuala, which is sold in a few hundred activewear departments, gym pro shops and yoga studios, Nuala is being sold on a more selective basis in specialty stores, said Nuala sales director Rebecca Dobrick, who sat in on the interview. Nuala’s wholesale prices range from $45 for a top to $185 for a jacket.

The new Nuala also will be sold in Puma’s freestanding stores, as well as the first Puma Black Station store, which is expected to open before the end of the year on West 14th Street here.

Aside from attending her friend Marc Jacobs’ fashion show, Turlington doesn’t dwell on her previous life. “The more I go to shows, the more removed I feel. It’s crazy and chaos,” she laughed.