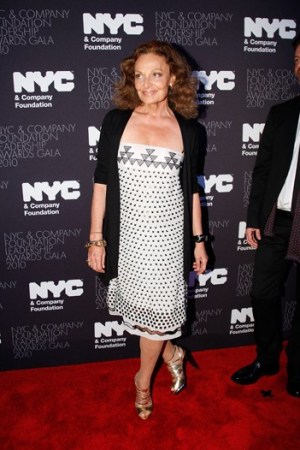 This story first appeared in the December 3, 2010 issue of WWD. Subscribe Today.

Jason Wu, who arrived with model Carolyn Murphy wearing one of his designs, said this holiday season presented a perfect moment to be honoring fashion. “Fashion is playing an important part in revitalizing the economy,” he said.

Mayor Bloomberg — arriving on stage to the tune of “New York, New York” — handed the trophies to the three honorees, who have been instrumental in the creation of Fashion’s Night Out and who Bloomberg touted as key visionaries in contributing to New York’s status as a cultural capital. Bloomberg was not short on humor, wishing the audience a “Happy Hanukkah.” But he also struck an earnest note, reminding the audience just how seriously he takes the fashion business.

“Fashion, in case you haven’t noticed, is critical to New York City,” Bloomberg said, reminding the audience of some key facts about the New York industry, including that it employs 175,000 people and generates $10 billion in total annual wages.

It was up to Lundgren to speak on behalf of the honorees. “There was a vote on who would speak among the three of us, and I missed the meeting,” the Macy’s chief told the crowd, in a sweeping speech in which he professed the trio’s love of fashion, the city’s fashion industry and New York itself. “This is our city and we don’t take that for granted,” he added, before singing the praises of von Furstenberg and Wintour.

“Diane had this extraordinary vision before any of us about what would be today’s Meatpacking District,” Lundgren said. “The only time I ever saw a flasher was down there, across the street [from the DVF Studio],” he added, recalling a trip to the Meatpacking District before its gentrification. “We all wish we would have had the vision Diane had then.”

Lundgren praised Wintour’s successful “call to action,” after the recession left retail particularly hard-hit. He recalled an amusing anecdote from the kickoff of the first Fashion’s Night Out at Macy’s in Queens last year.

“Anna said, ‘I have been to Queens before, I have been to the tennis matches,’” Lundgren said. “I said, ‘no, no, no, this is [the real] Queens, this is Queens Boulevard.’”