IMG has confirmed that New York Fashion Week will move to two spaces in September: Skylight at Moynihan Station Midtown and Skylight Clarkson Sq in SoHo. 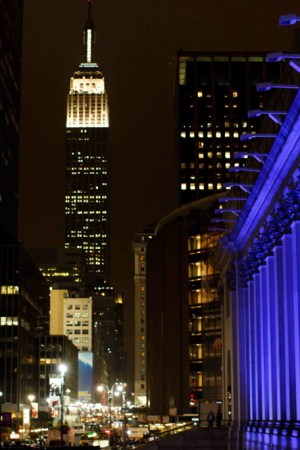 NEW YORK — And the winners are: Midtown and west SoHo.

IMG has confirmed that New York Fashion Week will move to two spaces in September: Skylight at Moynihan Station at 360 West 33rd Street and Skylight Clarkson Sq at 550 Washington Street. The shows had been held at Lincoln Center for the past five years.

New York Fashion Week will take place Sept. 10 to 17 and feature the spring 2016 collections. IMG declined to disclose the length of the contract for the new sites, but said it was a multiyear deal.

“As IMG prepares to evolve New York Fashion Week, we are focused on creating the best possible experiences that extend beyond a physical location and moment in time,” said Mark Shapiro, chief content officer at IMG. “We’re looking forward to reintroducing the industry to a showcase of creative talent, style and innovation that made the New York runways famous. Part of this showcase involves staying close to inspirational hubs for fashion, art and music, and we’ve found a great new home for that in Skylight at Moynihan Station and Skylight Clarkson Sq.”

Skylight Clarkson Sq and Moynihan Station are two venues from Skylight Group. Built in 1912 by architects McKim, Mead, & White, Moynihan Station is between Eighth and Ninth Avenues and at one time processed 90 percent of the mail in the U.S. It was designated a New York City Landmark in 1966. In past seasons, Rag & Bone, 3.1 Phillip Lim and Olivier Theyskens’ Theory showed there. Moynihan Station, the future home of Amtrak, is currently in Phase 1 of construction, which is scheduled for completion in 2016. Phase 2 will include a large train hall in the Farley Building. Amtrak will relocate its operations from Penn Station to Moynihan Station when Phase 2 is fully funded and completed.

Skylight Clarkson Sq is where Ralph Lauren has shown his women’s collection the last few seasons and where New York Fashion Week: Men’s will take place July 13 to 16.

Among the details of the show spaces offered:

• Skylight Clarkson Sq offers Studios 1 and 3, which are raw venues that can be customized. Studio 3 can accommodate up to 500 guests and Studio 1 up to 250 guests and can be tailored for runway, U-shaped or presentation/installation shows.

IMG held a series of conversations with designers, show producers, journalists and partners before choosing the venues. This past season, 94 designers participated in what was then known as Mercedes-Benz Fashion Week (including associate designers who showed off-site), and 76 presented in the Lincoln Center tents. Mercedes-Benz has pulled out as the title sponsor of New York Fashion Week.

IMG’s exit from Lincoln Center was a long time coming. WWD reported in December 2013 that the shows would vacate the tents there when its contract expired after the February 2015 season. The departure was spurred by a lawsuit filed by community activists over whether the MBFW tents in Damrosch Park were a violation of the public-trust doctrine. Based on a settlement in December, the City of New York, the New York City Department of Parks and Recreation and Lincoln Center agreed not to renew their contract with IMG — a moot point since IMG already agreed not to stay.

Over the last few years, many designers became disenchanted with the commercial atmosphere of the Lincoln Center tents and decamped to other venues around town. Some designers were never there to begin with, such as Ralph Lauren, Calvin Klein, Donna Karan and Marc Jacobs. The result has been a fashion schedule that has been spread out all over town more than ever — from the tip of Manhattan to Brooklyn. This past season, venues such as Spring Studios, Park Avenue Armory, ArtBeam, Vanderbilt Hall at Grand Central Terminal, Skylight Modern, Industria Superstudio, Pier 59 Studios and even the Duggal Greenhouse at the Brooklyn Navy Yard were among the spaces used by designers. Whether any of these designers will return to the fold is yet to be seen.

Many major designers, such as Diane von Furstenberg, Michael Kors, Tommy Hilfiger, Karan, Lauren and Jacobs not only prefer to have their own space so they can design their sets however they want, but they also don’t want to be on such a tight timetable to get in and out quickly, said sources.

Ultimately, the New York shows are expected to move to the Culture Shed, which is part of the Hudson Yards Redevelopment Project. While the completion date was initially projected around 2017, informed sources indicated it will take much longer — possibly until 2019 or later — to complete the project.

According to IMG, the new homes for New York Fashion Week were chosen with the support of community leaders, including New York State’s Empire State Development, which oversees Moynihan Station; the city of New York, and Mayor Bill de Blasio.

“Moynihan Station is an iconic and historic venue that will provide a unique backdrop for the evolution of New York Fashion Week,” said Howard Zemsky, Empire State Development president and chief executive officer and commissioner of the New York State Department of Economic Development. “While ESD continues its work in transforming the expansive facility into a world-class transportation hub, hosting this global event in the Skylight space will support both the fashion and tourism industries and contribute greatly to the New York City economy.”

Mayor de Blasio added, “From the hundreds of thousands of jobs it creates to the billions of dollars of economic impact generated each year, the fashion industry contributes so much to New York City, and I’m thrilled that New York Fashion Week will bring so much excitement and energy to its next home at Skylight Clarkson Sq and Skylight at Moynihan Station. My administration will continue efforts to ensure that New York City’s working designers and manufacturers — and those aspiring to join that community — have the support they need to make it in New York City, and continue to grow NYC as the fashion capital of the world. Today’s announcement is an important step in that direction.”

A study from the New York Economic Development Corp., which was released in February, showed that the fashion weeks held in September and February generate $887 million in total economic impact annually, including $547 million in direct visitor spending.

Last month, WME-IMG acquired its chief rival, Made Fashion Week. Made, which began in 2009 as an alternative for designers who couldn’t afford to show at traditional venues, has featured about 30 runway shows and presentations each season from designers that have included Altuzarra, Cushnie et Ochs, Public School, Proenza Schouler, Jeremy Scott, Sophie Theallet, Ohne Titel, Wes Gordon and Alexander Wang. Made offers young designers free space, production and makeup — costs that could easily rise into the five figures — a strategy that’s expected to continue. Made will continue to operate as a separate entity while strategically aligning with WME-IMG to provide additional opportunities and creative resources for both entities’ designers and partners.