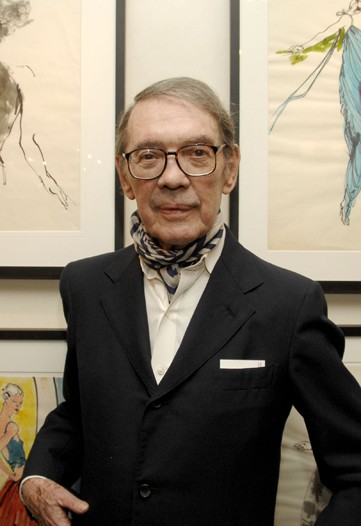 The cause of death was complications from a fall he suffered earlier in the week, according to his nephew, Steven.

Men wore fedoras and women still wore gloves when Block joined Fairchild Publications Inc. in the Fifties. And none of that dash was lost on Block, whose fondness for ascots, cigarette holders and impeccable jackets never waned, nor did what one friend described as his Dorian Gray-like youthfulness. But his studied drawings were never strictly surface, always managing to capture the gesture at hand, whether it be the swing of a skirt or the tilt of the head. “I was never only interested in the clothes. I was more interested in the women in the clothes,” he once said.

One of three boys growing up, Block was the kind of kid who appreciated the chicness of his fashion editor aunt Elsie Dick’s zip-front fur jacket. He combed through Harper’s Bazaar magazines in the attic of his family’s home in Larchmont, N.Y.

At Parsons School of Design, he was drawn to what he described as the “world of immense style,” introduced by interior designer Van Day Truex. After graduating, Block’s first job was sketching for McCall’s Patterns, a post friends said he would rather have omitted from his résumé. But Block went on to cement his presence as a leading fashion illustrator during his reign at Fairchild Publications, which lasted until the fashion illustration department was disbanded in 1992. Through it all, he swiftly, yet fastidiously, captured an array of subjects with a cool and detached manner, jetting to Europe for the couture shows or sauntering just up the street to sketch unsuspecting notables at lunch (martini in hand to mask his intentions). All the while, he fulfilled what he once described as a childhood quest “to draw glamorous women in beautiful clothes.”

Block’s portfolio was packed with portraits of blue bloods such as Babe Paley, the Duchess of Windsor and Jackie Kennedy, as well as commercial work for Bergdorf Goodman, Bonwit Teller and Lord & Taylor and labels such as Halston and Perry Ellis. But for Block, the end result was never just a matter of lines on a page.

“Gesture to me is everything in fashion. It is the way we stand, sit, walk and lie. It is the bone,” he once said.

To capture the body just so, he was a regular at museums, Peggy Guggenheim’s 57th Street gallery The Art of This Century, modern dance performances and the ballet. The illustrator even drew program covers for the Ballet Society, the predecessor to the New York City Ballet. His skills became so true-to-life that in the event WWD was banned from a show, as was the case with Balenciaga and a few others through the years, Block could re-create it just by listening to “Coat King” Sydney Gittler or one of his retail spy’s renditions, said Susan Mulcahy, who collaborated on his 2007 book, “Drawing Fashion: The Art of Kenneth Paul Block.” He also wasn’t above throwing in his design flourishes from time to time, she said. In 1960, when WWD had designers whip up inaugural sketches for the then-incoming First Lady Kennedy, Block offered one of his own — a velvet gown inspired by the Army surplus poncho he liked to wear.

“He was really the most elegant fashion illustrator,” said John B. Fairchild, former chairman and editorial director of Fairchild Publications and currently a contributing editor at large to WWD and W. “He was really Mr. Elegant in the way he drew people and people loved to be sketched by him. Fashion designers would drop everything they were doing when he walked into the room because they all adored him.

Hubert de Givenchy said, “I admired his talent. His pen knew how to express the personality of the society ladies he drew.”

In sketching Oscar de la Renta’s collections for more than 30 years, Block “gave a life and movement to the clothes far beyond what the clothes actually were,” de la Renta said. “What’s extraordinary is when you look at his sketches, they’re not dated. They are as good today as they were then.”

Yves Saint Laurent wrote in the foreword of Block’s book, “It is a pity today but there are no more fashion illustrators. For, however much I admire photographers, I have to admit that their work is done to the detriment of the design. It is often the background that takes pride of place. In the case of illustration, it is the opposite. The design is well and truly present, alive.”

Pierre Bergé said of Block, “He was an extraordinary illustrator. There were very few fashion illustrators. Of course, there’s Eric [Stemp], Joe Eula, Antonio [Lopez], but not many. It was an époque where fashion was surrounded by artists, which is not the same today, where it’s surrounded by marketing and business. It was an époque where newspapers were interested in fashion and not just in advertising. He was part of this époque, which has completely disappeared.”

“He worked very, very quickly, like all great artists,” Bergé said. “Saint Laurent was a great fashion illustrator. He understood that Kenneth, though he wasn’t a fashion designer, was capable of re-creating the quality of a piece, the movement of a design. Very often, an illustration by Block is much more important than a photo.”

Robert Richards, who curated “The Line of Fashion,” which features Block’s work and is on view through May 2 at the Society of Illustrators on the Upper East Side, said, “The second half of the 20th century was really defined by Kenneth. He understood sociologically the women we sketched — how they dressed, how they carried themselves, how their shoes fit. I can still envision his portraits of Babe Paley and Gloria Guinness. No photo will ever do justice to these women the way that Kenneth Paul Block did.”

Paley and her daughter Amanda Burden, Judy Peabody, Kitty Miller and Countess Jacqueline de Ribes were among his many portraits. “He was an extraordinary artist,” said de Ribes. “The sketch he did of me is absolutely magnificent. I remember he was a very discreet, very polite and civilized man.”

While still a student of 18 and a part-timer at Perry Ellis, Isaac Mizrahi “grew up idolizing” Block and met him in the designer’s showroom. “Everyone at Perry Ellis knew I worshipped him so they asked me to assist him if the model needed to change her hat or touch up her makeup. I tried to sneak a peek of his sketch and he shrieked. He didn’t like people to watch him work. I thought, ‘Oh God, this is the way to meet your idol — make him shriek.’ Two weeks later, I saw him on the steps of the Met [Metropolitan Museum of Art] at the Costume Institute Ball. It wasn’t anything like it is today. He was standing on the top step in his evening cape and he was so gracious to me, after I thought I had offended him.”

Anna Sui recalled seeing Block in action when she visited her friend Steven Meisel early on in his career during his days at WWD. “His strokes were just so sure. He whipped them out.”

“He could take any art supply — a marker on a baggie — and magic would happen with the fewest lines possible,” Stipelman said.

Illustrator Richard Rosenfeld said, “The thing that really struck me about Kenneth was his interest in literature, theater, art. He was really very cultured. He could draw anything — shoes, clothes, interiors. He was an artist. He understood elegance incredibly well. He understood those women, how they posed and how their shoes fit. But he could also draw their daughters who were so young and hip. He had such range in his work.”

Michael Vollbracht seconded that notion and recalled giving Block the first-class fan treatment when the designer was working as a fashion illustrator for Bloomingdale’s. “I told him, ‘I traced all your drawings from Women’s Wear Daily. That’s how I learned to draw.’ And he looked at me with complete disdain as he puffed a cigarette high in the air. He was not amused.”

Robert Richards, the curator of “The Line of Fashion,” said he was overwhelmed by the trove of work that he had to choose from at Block’s cubby in Manhattan Mini Storage. “I wanted everything,” he said. “I thought, ‘I can’t look at any more. It’s all too great.’”

Apparently, even Block was overwhelmed by the end result. When Richards approached him at the show’s initial run downtown in the fall, “Kenneth had tears rolling down his cheeks. He turned to me and said, ‘Oh Robert, these are my five favorite drawings.”

Last month, Block donated more of his drawings, 1,845 to be exact, to the Museum of Fine Arts in Boston. Deputy director Katie Getchell said of the archives, “I was amazed by the range and quality of his work and that one person who had witnessed so much history in fashion had actually documented it all and that he wanted it to be part of a public collection made a big impression on me.”

Block is survived by his partner of nearly 50 years, Morton Ribyat, as well as nephews and cousins. A memorial service will be planned at a later date. In lieu of flowers, donations can be made to charities of the donor’s choice.