The National Football League player talked about his new line, Lena Dunham and why he doesn’t go to fashion shows. 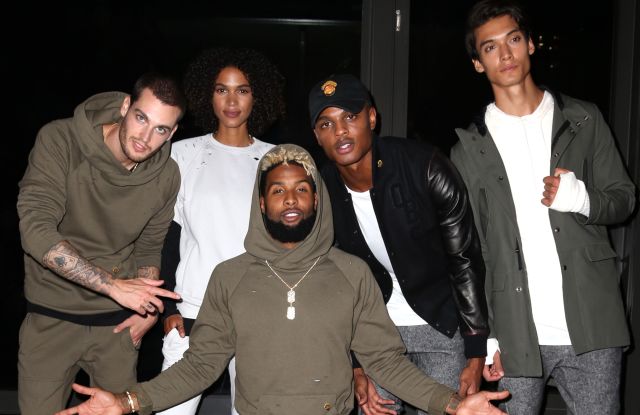 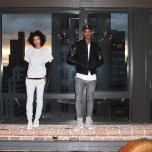 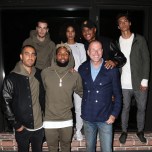 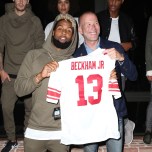 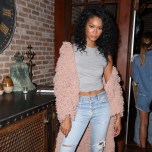 The blonde-haired New York Giants wide receiver has teamed with contemporary brand Twenty Tees to create a capsule line of ath-leisure pieces, which are available exclusively at Bloomingdale’s.

“It just came about,” said Beckham, who celebrated the launch of the line, 13 X Twenty, this week in New York, of the partnership. “I was just in the right place at the right time.”

The line, which is primarily for men but can be worn by women, which a female model displayed at the party, includes hoodies and T-shirts with subtle distressing, matching sweat suits, a parka, dad caps and a black varsity jacket that’s embroidered with Beckham’s face and hair. Pieces from the line also come with a small pen with Beckham’s face.

“I’m just having fun,” said Beckham when asked about why he decided to place his face on the back of a jacket. “Life is about taking risks. There are people who don’t take risks, but I’m more of a risk taker. I love enjoying life and doing different things.”

Unlike many of his peers, Beckham has yet to become a regular during the Men’s Fashion Week circuit in London, Milan, Paris and New York, but he’s hoping to attend a few shows during his next off-season.

“My schedule has been hectic, but I know for sure this off-season I’m going to be traveling and going to shows in Milan and Paris because I’ve never been able to experience anything like that,” Beckham said.

Thanks to Lena Dunham, the football player recently found himself at the center of a hot topic on Twitter. In a Q&A with comedian Amy Schumer that was published in Dunham’s Lenny newsletter last week, Dunham commiserated with Schumer about their experiences at The Met Ball. According to Dunham, Beckham, who was seated at the same table as her, didn’t show her any attention because she wasn’t, in short, hot enough.

Dunham received backlash online from people who thought she was projecting her own insecurities onto Beckham. The actress later apologized.

“I didn’t know what exactly happened,” said Beckham. “I just kind of remember being on my phone one day and seeing things go off for two days in a row and I said, ‘All right, let me check and see what’s going on.’ I don’t know. I don’t have any bad blood with Lena Dunham. We will figure it out.”