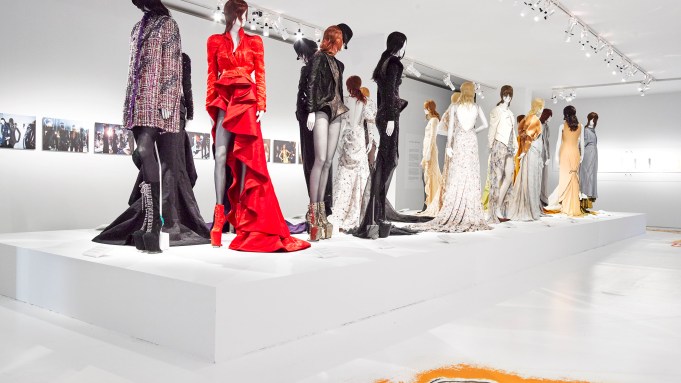 ANTWERP, Belgium — “It marks the closing of a perfect 20-year cycle,” said Olivier Theyskens during a preview Wednesday of his retrospective “Olivier Theyskens: She Walks in Beauty” at the MoMu fashion museum here, which traces in strict chronological order the five key phases of his career.

Named after a line from the poem penned by George Gordon Byron, aka Lord Byron, in 1813, as a piece that chimes with Theyskens’ own penchant for dark romance and historical references, the show — organized as a series of graphic black-and-white spaces that the visitor walks through, with Theyskens’ creations grouped in powerful tableaus on podiums — follows the designer’s evolution from the creation of his namesake line in 1997 to his explorations of French elegance at Rochas and Nina Ricci, from 2003 to 2006 and 2006 to 2009 respectively, followed by a curveball three-and-a-half-year stint at American sportswear label Theory from 2010, and wraps with pieces from the current fall collection of his resurrected signature line. Positioned as a prêt-à-porter brand with a “couture spirit,” the new direction is a little purer in essence but with all the signatures in place, including Theyskens’ deceptively simple tailor’s cuts.

Highlights of the show include a group of sculptural, tiered, Rochas evening gowns with bands of flounced lace, and a group of bias-cut gowns from the designer’s later collections for the house, in a spectrum of greens, not forgetting the futuristic “Blade Runner”-esque power looks from his swansong collection for Nina Ricci for fall 2009, accessorized with alien stiltlike boots. (At the time, it was viewed as a creative kiss-off to Ricci management and a defiant statement of his own vision versus the romantic and ethereal image of the label.)

Also on display — positioned at the top of some steps in a vast white angled room with mirrored pillars toward the show’s end — is the bridal gown that he made for New York entrepreneur Nell Diamond during a break after leaving Theory, as well as a series of sketches and handwritten quotes by Theyskens presented on a white enamel strip threaded along the walls of the show.

“What is moving for me is that a lot of the ingredients of these clothes come from small purchases I would have made in fabric stores in London or Paris, or ancient laces that my grandmother collected and would sometimes give to me,” said Theyskens, surveying a group of creations from his early collections as a 20-year-old, largely self-taught wunderkind.

From a silk blouse and bodice gleaming with lines of jet beads and vintage mourning jewelry to his first experiments with mastering the bias cut, corsetry and dramatic gowns with trains and lines of antique-style hook-and-eye closures, his DNA comes through loud and clear. Some of the pieces were featured in his first fashion show in 1997, as part of the Barclays Catwalk event in Knokke, Belgium, where he was scouted by French press officer Kuki de Salvertes, cofounder of the Totem agency.

“I wanted the girls to look super tough — slightly punkish. In my mind, they were sophisticated, end-of-century punk girls. It was definitely a neo-romantic moment in my life, and these were very different types of designs from what I had done a year earlier at school,” he said. “It was a new mood that I was discovering, and accidentally this was the mood when I started.”

In a nearby room, three members of the museum’s team were carefully piecing together the bright yellow corseted silk gown worn by Madonna to the VH1 Fashion Awards in 1998, crisscrossed with hook-and-eye closures like scars, freshly delivered from her archives in a wooden trunk marked “fragile.” (Theyskens’ real career break came when she wore a black satin gown he designed to the Oscars in the same year. Immediately dubbed a goth hero and a rising star, the designer — as part of the second wave of Belgian designers — was considered a front-runner to succeed Alexander McQueen at Givenchy in 2001.)

As the museum’s first exhibition around a Belgian designer who did not study at the local Flanders Fashion Institute — Theyskens attended La Cambre art and design school in Brussels for a while before dropping out — the show also marks the closing of a circle for MoMu as the final exhibition before it shutters for two years of renovation.

Winking to the imminent closure, design features throughout the exhibition include ripped ceiling panels and fun painterly multicolored spots on the floor made by stripping back the paint to reveal shades used for exhibitions past.

Aside from marking the impressive legacy of a Belgian designer who, at 40, has spent half of his life in fashion design, the motive behind the show, which will stay open through March 18, was to explore, in today’s cut-throat revolving door times, how one designer — through his career and the different labels he works with — develops a vision that is coherent but still tailored to the respective brand. Or as per the show’s introductory text: it’s a portrait of a “living designer in a changing fashion world at the brink of the 21st century.”

“Typically with a case study you’ll take a house, like Dior, and show what the different designers contributed, whereas here it’s the exact opposite,” said Lydia Kamitsis, the exhibition’s associate curator. “We also wanted to explore what it means for one designer to match his own ethos to the history of somebody else, and how to keep his own soul and talent intact.”

As one of the most acclaimed designers of his generation, known for his poetic vision and emotionally charged, theatrical runway shows, Theyskens throughout his career has also experienced his fair share of flak, including gaining a reputation as a purveyor of overpriced demi-couture gowns for a couture elite.

But alongside all his fragility and poetry, the show also highlights his resilience. “It’s always weird to see things from the past, from other circumstances and moments of your life, but I’m at peace generally with what I’ve done,” said Theyskens, who after leaving Theory felt it was time to get back to his own story. Ultimately all of his experiences have fed into his own tale, with a sense of his collections maturing as the exhibition progresses.

“When I started in the fashion world, I was instantly labeled. I was labeled gothic, even though I barely knew what gothic was, and I’m not a goth….A lot of times I’ll hear people say this or that about a house, and you go to the store and see that the story is way more interesting than what people have seen in a flimsy way on the catwalk, or in magazines. People like to have their opinions when in reality very few really see everything you do. But that’s how it goes, and I have no problem with that. You have to go your way,” said the designer, who hopes the exhibition will help people to understand “that somebody creative can be full of resources in different situations, that it’s a great skill to be able to adapt to different situations.”

Looking to his next chapter, Theyskens said he’s still open to the idea of collaborating with other brands — though the designer is in no hurry.

“I like imagining things for other labels, but also like to know that I can imagine things under my own label,” said Theyskens. “And right now it feels right to be putting my labels in the backs of my creations.”