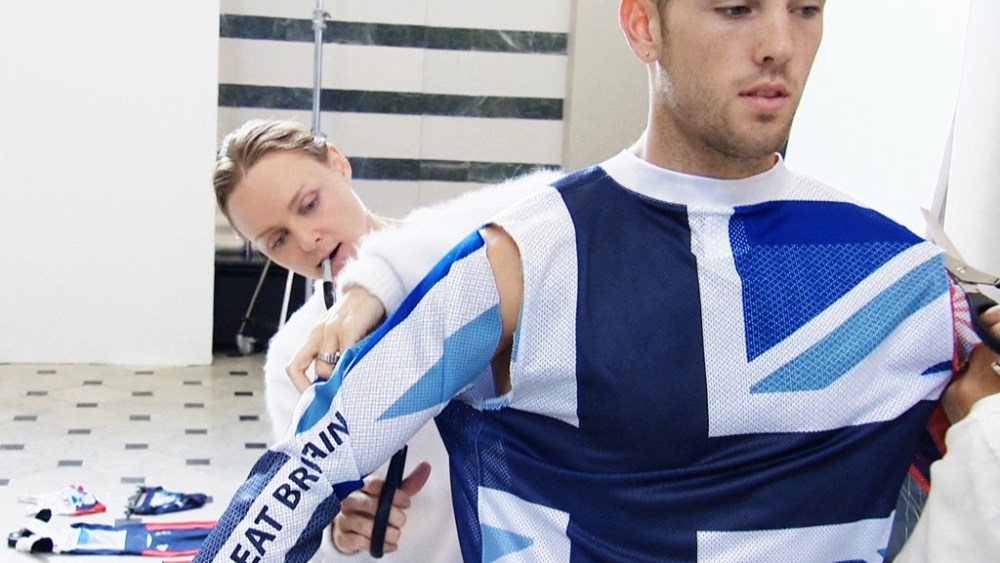 As the controversy continues to brew around Olympic apparel, WWD rounded up some leading looks from a bevy of countries. Just don’t ask where the clothes were made.

Stella McCartney is keeping her cool. “Lycra is my new best friend,” she told WWD. She designed the official Adidas outfits for 26 British Olympic disciplines and 20 Paralympics ones, in addition to all of the country’s off-field clothes. The experience, she said, “has truly been life-changing…[with] challenges like nothing I have ever experienced.”

Finnish skiwear and outdoor brand Halti designed the ceremony and podium wear, as well as warm-up tracksuits. Head designer Martti Kellokumpu “freshened up” the blue and white of the country’s flag with touches of orange, and used a black-and-white rocky print inspired by the Helsinki Archipelago.

New Zealand outdoor brand Rodd & Gunn designed the formal off-field uniforms as well as a casual T-shirt. For the latter, shown here, the logo was created by Gareth Gardner, who won a national competition to best depict what it means to be a proud New Zealander. Chosen from more than 3,500 entries, Gardner’s design is an Olympic adaptation of the Maori ornamental pendant, the hei tiki.

While Bogner has been the outfitter of Germany’s Winter Olympic team since 1936, this is the first time the company has been tapped for the summer games. Ceremony jackets were done in bright colors (hot pink for women, turquoise for men), and reverses into black buttoned blazers for a more formal look. “They are made to withstand London’s mercurial weather while also being extremely suitable for a reception at the German embassy,” said company founder Willy Bogner.

Sportscraft, the 98-year-old Australian brand, created the opening ceremony uniforms, while custom shoes were designed by Dunlop Volley. “We worked with past and present Australian Olympians on the look and feel of the uniform,” said Daniel Bracken, chief executive officer of The Apparel Group, which owns Sportscraft. “They wanted something that reflected Australian sporting heritage and was authentic. The [look] has a retro-vintage feel and takes inspiration from the Australian team uniform at the 1948 London Olympics.”

“Stepping outside my fashion comfort zone and leaving my ego to identify myself in a sportsman’s mentality is something that intrigues me a lot,” said Giorgio Armani, who designed Italy’s off-field looks, shown here, and opening ceremony wear.

Adidas is the official supplier of the ceremony uniforms and podium wear. Inspired by the blue element of the French flag, the looks were altered to reflect a Warrior Romantic theme, one that looks to the younger, passionate and rebellious generation of France, noted an Adidas rep.

For the first Olympics since the 2011 earthquake in Japan, Takashimaya designed opening ceremony looks in the colors of the country’s national flag. The suitlike outfits were made entirely in Japan and employ some of the country’s latest textile technologies.

Designed by Canadian retail chain Hudson’s Bay Co., the opening ceremony looks include polo shirts featuring the maple leaf, and track shorts with the Canadian Olympic stamp. “The graphics are reminiscent of past Olympic Games including the Canada wordmark, inspired by the Montreal 1976 Olympics and the Maple Leaf Canada graphic first seen at the Stockholm 1912 Olympics,” said Suzanne Timmins, HBC senior vice president and fashion director.

Sprinter Usain Bolt, aka the fastest man in the world, is Jamaica’s ticket to gold, and Puma is outfitting Bolt (pictured) along with Jamaica’s track and field team. Designed by Puma collaborator Cedella Marley (yes, Bob’s daughter), the collection includes off-field and on-track performance wear. “My approach was to capture the vintage look of Jamaica in the Seventies,” said Marley. “And I pulled ideas from classic films like ‘Rockers’ and also musicians like Grace Jones, Gregory Isaacs and, of course, my dad.”

Danish brands Jack & Jones and Vero Moda designed the opening ceremony uniforms as well as podium, casual and reception wear. “The challenge was to keep a [common aesthetic] all the way through,” said Jack & Jones designer Anne Bjørnager. “We tried to make it a bit more fashion-forward while including sports references.”

Philippines-based designer Rajo Laurel was inspired by the country’s national costume, the barong Tagalog. “The embroidery features a modern design with dark cobalt and blue threads symbolizing good fortune,” said Laurel. “The main accessory is a salakot [hat], which I had gilded in gold leaf and hopefully will catch the light as they enter the Olympic arena.”

NEXT: The Azerbaijan Republic >>

Italian designer Ermanno Scervino was selected to design the opening ceremony looks. Scervino is a popular label in Eastern Europe, with three stores in Moscow, in addition to ones in Saint Petersburg, Samara and Novosibirsk.

The opening ceremony, podium and official events looks are the result of a collaborative effort between Swiss design agency Formeldrei, Switcher and the Swiss Olympic Association. The collection, inspired by a British vintage look, includes a trenchcoat made out of recycled polyethylene terephthalate, or PET, bottles.

In addition to the Russian team, Bosco is dressing the Ukrainian athletes. “Our outfit for the London Games turned out to be very colorful, in the spirit and style of our flag and our cultural traditions,” said Sergey Bubka, president of the National Olympic Committee of Ukraine.