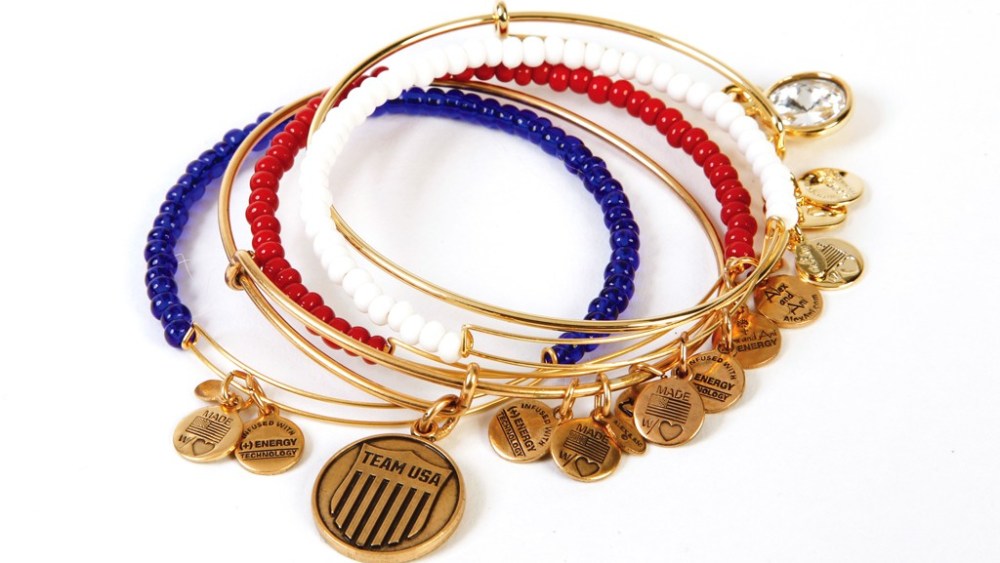 With the Summer Olympic Games kicking off in just over a week, designers are banking that consumers will want a piece of the action, however small it may be. Their anticipation has ushered in a spate of Olympic-centric accessories. The key element? Eye-catching signage, often in the form of Union Jack flags and the Olympic rings.

RELATED STORY: Olympics Summer 2012 Preview, Get Your Game On >>

While most brands aren’t officially affiliated with the Olympics, Swiss watchmaker Omega scored the role of the Games’ official timekeeper. This entails ticking away the seconds by a 450-person professional Omega-deployed crew measuring via the Quantum Timer and the Quantum Aquatics Timer, devices that can quantify down to one-millionth of a second. There’s a consumer hook, too. It may not tell time down to that precision, but the stainless-steel and steel-yellow-gold wristwatch with an alligator strap from Omega’s three-piece limited-edition collection oozes intrigue all the same. The watches, available since April, all feature the official London Games emblem stamped on their back face. “The Olympic Games is the highest-profile sporting platform in the world, so there is obviously an enormous amount of appeal for items with a connection to them,” says Omega’s president, Stephen Urquhart.

Other brands look to the Union Jack. Though a long-standing favorite of designers, the motif is now in fashion overdrive. The pattern is pumping up everything from glitzy crystal-encrusted wedges to bold minaudières and studded smoking slippers. “As a British designer, it’s great to have all eyes on London,” says Lulu Guinness, who worked it in snakeskin for her signature pout-shaped clutch. “There are Union Jacks everywhere in London, especially since the Jubilee and now with the Olympics — it really is London’s year.”

Sharing the design spotlight with the British flag: the Olympic rings, go-to graphic of the sports juggernaut. Designers are finding unexpected ways of incorporating the famed symbol into their pieces. Cesare Paciotti printed a hot-pink version on the side of his white Lady Victoria pumps, which became available only at his Madison Avenue boutique in New York beginning in June. “The shoe itself represents the perfect marriage between the sexy woman’s spirit and the highest example of sporting spirit,” Paciotti says. Anya Hindmarch went a subtler route, putting a quirky spin on the plimsoll, the Brit term for sneakers with a rubber sole and a canvas top. Created in collaboration with sportswear company Dunlop, Hindmarch’s take is a luxed-up version of the classic, done in canvas, ostrich and suede with colored lace holes to mimic the Olympic rings. The tricked-out shoes became available for purchase (exclusively at Hindmarch’s London flagship and on the designer’s Web site) on Monday. “I think everyone likes to have a souvenir, to mark that particular moment in time and to show that they were a part of it all,” she says. “I’m lucky enough to have tickets!”

Are the London Olympics inspiring British designers and retailers to get into shape? See Thursday’s WWD.