On The Drawing Board

GOLD LEAF DESIGN: Avant-garde German publishing house Taschen has teamed up with architect Philippe Starck for its just-opened U.S. flagship in Beverly Hills. The bookstore, which sells limited editions priced in the thousands, is suitably... 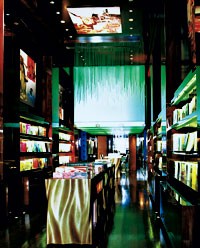 The feel of the store, located on North Beverly Drive, is in keeping with the original Taschen retail venue, also designed by Starck, which opened in Paris four years ago. Benedikt Taschen, originally from Cologne, Germany, but who is now a resident of Los Angeles and Miami, is a publishing industry icon for his illustrated books that cover subjects from art and architecture to popular culture and sex. Among his reading list are the late Helmut Newton’s “SUMO,” which retails for $3,000, and the visually packed, 800-page, 75-pound “GOAT — Greatest of All Time” — a tribute to Muhammad Ali, priced at $7,500.

In describing what he was going for in the store, Taschen said that warmth and welcome were key.

“It’s the Sistine Chapel of the 21st century — not a cold fashion boutique, but a place where people like to stay, and, hopefully, buy some books,” he said.

A NEW TWIST: Marquetry, a decorative technique in which thin layers of wood are inlaid into patterns, has been making a quiet comeback.

Stella McCartney’s London store, which opened last spring, is filled with marquetry of enchanted forest motifs, and the latest Renault model has marquetry on the dashboard. It should come as no surprise, then, that David Linley, who has spent a career making furniture with marquetry inlays, is taking his designs to the next level. Linley has just unveiled a collection of furniture featuring the twisting strands of the double helix, the structural arrangement of DNA.

“Usually, when people think of marquetry, they think of Dutch 17th-century furniture with inlaid flowers and jugs,” Linley said. “Our goal is to break down the barriers between old and new, to combine traditional marquetry techniques with a modern idiom. We felt close to the double helix: It’s scientific, fluid and natural.”

The new invasion of marquetry features one modern invention, in that the wood is cut by laser, rather than by hand.

“The laser can do everything a scalpel and hand can do, but it’s more accurate on the curves,” added Linley.

The collection — made from Santos rosewood, Indian rosewood, walnut, ebony, satinwood and polished steel — features a coffee table, computer desk, console table, mirror and side table. Prices range from $4,140 for the side table to $27,000 for the computer desk. Linley said the new designs work — for him, at least.

“I’ve been test-driving the desk for the past two months and I’ve found that it blends in well with more traditional pieces of furniture,” he said. “It seems to lighten the pieces around it and create a sense of calm.”

WRITING ON THE WALL: After Bottino co-founders Danny Emerman and Alessandro Prosperi struck out on their last venture — the overdesigned, would-be NoLIta hot spot, Bot — the pair went back to basics.

Bot “was all about fluidity,” Emerman said. “It was all flowy and chartreuse. Those values weren’t really [those of] the neighborhood.”

Their latest venture, Bivio, is back on familiar ground in Manhattan’s West Village, where the design is reassuringly Mod and sleek.

“I slept through postmodernism,” said architect Hasson Abouseda. “I’m not interested in a restaurant-as-spaceship, or train car, or Spain 1914.”

Instead, Bivio’s vibe is a downtown version of the modernist-with-a-twist look that Marc Newson installed at Lever House Restaurant uptown — wood paneling for warmth, brushed aluminum for cool and even a similar honeycomb motif. For fun, one interior wall is a giant slate chalkboard marked up with Bivio’s menu, where entrées are erased as supplies run out in the kitchen.

“I’m not about creating a reproduction restaurant like the one around the corner,” said Emerman, referring to the Keith McNally outpost, Pastis, but he also praises Abouseda for creating “something a little bit old-looking….I wanted a place that was also kind of working class.” (As if models and art-world refugees can be considered working class.) The look may even be safe enough for life outside the West Side.

“Bivio is very franchisable,” mused Emerman. “My contractor is currently looking at spaces in Shanghai.”