On The Drawing Board: Decket Out … Rocky High

This summer, people relaxing in London's Royal Parks are getting a dose of design with their rented deck chairs. 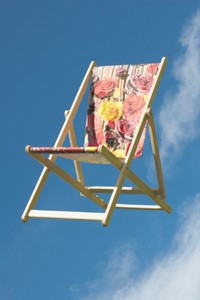 DECKED OUT: This summer, people relaxing in London’s Royal Parks are getting a dose of design with their rented deck chairs.

While some of the 24 designs mimic the chairs’ leafy environment, such as Smith’s explosion of roses set against his signature multicolored stripes, others are more abstract — Saville’s white deck chair is printed with different colored Pantone samples falling like confetti, inspired by the parks’ myriad colors. And chef Heston Blumenthal’s chair has a practical use — his design is a print of his perfect recipe for “hot and cold Pimms.”

First editions of the chairs were sold at auction, and reproductions are for sale through the Royal Parks Foundation’s Web site for approximately $118.
— Nina Jones

ROCKY HIGH: More than a century after the first major exhibition of Cezanne’s work was staged, a considerably more modern take is on display at Cathedrale D’Images, the quarry in Les Baux in France that serves as an art space. “Cezanne’s Colours” is kaleidoscopic, with scores of the artist’s paintings splashed — sometimes simultaneously — on the 43,000 square feet of stone walls. This summer marks the first time video projectors are being used instead of slide projectors. More than 3,000 photographic documents and 50 projectors, as well as props, lights and sounds are used in the constantly changing orchestration.

Cezanne presumably would have approved. When he died after being caught in a storm while painting in the nearby Aix countryside, he had already become a symbol of modernity.
— Rosemary Feitelberg