On The Drawing Board: That’s the Ticket … Awarding Design

THAT’S THE TICKET: Parsons School of Design is about to make its own political statement in the form of an exhibit of voting booths reimagined by a group of 50 artists, architects and designers called “The Voting Booth... 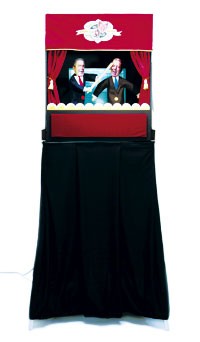 THAT’S THE TICKET: Parsons School of Design is about to make its own political statement in the form of an exhibit of voting booths reimagined by a group of 50 artists, architects and designers called “The Voting Booth Project.”

The division of New School University plans to open the show to the public on Oct. 8 with booths designed by a cast of politically minded individuals such as David Byrne, Frank Gehry, Maya Lin, Richard Meier and Diane von Furstenberg — each with a different take on the electoral process.

David Rockwell created a combustible booth made from wood splints and rice paper, evoking the idea of “playing with fire.” Robert A.M. Stern Architects submitted a work called “Hindsight 20/20,” which is covered in rearview mirrors, a reference to how the events of the past four years would have played out if the narrow 2000 presidential election had a different outcome. Alex Isley, a graphic designer, turned a booth into a puppet show that has President Bush wielding a baseball bat at an opponent’s head.

Adding another layer of meaning to the work, the original booths came from Florida, where they were used in the 2000 election, according to the school. Dean Paul Goldberger acquired the booths as a donation from André Balazs, the hotelier and companion of Uma Thurman, who bought dozens of them at a Miami flea market. The artists were each given a booth and asked to respond to it however they wished. The results were guest curated by Chee Pearlman, director of Chee Co., an editorial and design consulting firm.

Burden, whose current projects include the redevelopment of downtown Brooklyn and the transformation of the Fresh Kills landfill in Staten Island into a multiuse park, joins a roster of honorees at the annual event staged by the Smithsonian’s Cooper-Hewitt, National Design Museum. Previously announced award recipients include Milton Glaser and the Aveda Corp., as well as nominees for awards in five additional categories.