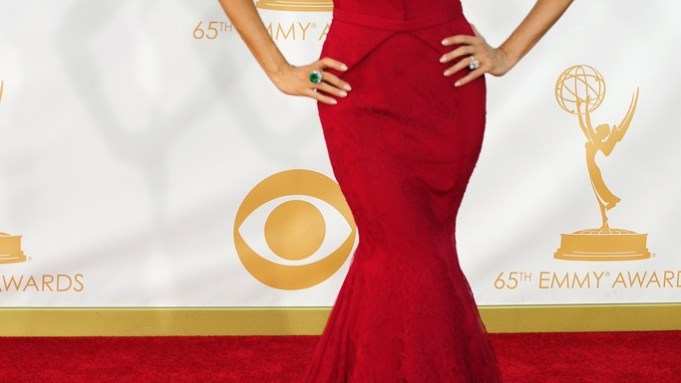 Stars seemed eager for a clean slate at the 65th Primetime Emmy Awards, judging by the number of ladies in white gowns. From Kate Mara in spring 2014 J.Mendel to Sandrine Holt in Honor and Kerry Washington in Marchesa, the noncolor was one of the leading trends on the Nokia Center red carpet.

Julianna Margulies exemplified the look in a custom gown by Reed Krakoff. “I’ve been a fan of his since I wore him in Cannes, and he wanted to make me a dress, which was incredibly flattering,” she said.

The white hand-painted fabric was his inspiration, resulting in a simple column that Margulies called “carefree without trying too hard.”

Jessica Paré was also indebted to a New York designer for her gown. “I was very privileged to meet Mr. de la Renta when I was in town for New York Fashion Week. He’s such a legend,” she said, adding that the turquoise gown “chose me, not the other way around.” When Paré turned around, she ran into costar Elisabeth Moss, who embraced her before brushing a few stray hairs off of her forehead. “We’ve still got to do photos,” Moss told her.

Of the brighter colors on display, shades of red, burgundy and plum made a strong showing, from Sofia Vergara in Vera Wang to Michelle Dockery in Prada, Linda Cardellini in Donna Karan and Mindy Kaling in Edition by Georges Chakra.

Sarah Paulson had planned to wear a different Carolina Herrera gown, but she was unable to get to New York for her fitting, so the designer overnighted a geranium gown fresh from the spring 2014 runway to Los Angeles. “It makes me feel like a sexy mother f-er,” she said, “because it’s tighter than anything I’ve ever worn.” (Sarah Hyland also collaborated with Herrera, on a dress from the CH line.)

RELATED STORY: Variety and Women in Film Team Up for Pre-Emmys Bash >>

“I don’t make a lot of bold choices on the red carpet but it felt like time,” said Anna Faris of her canary yellow Monique Lhuillier. “Do you have a steamer?” asked Faris’ publicist. “We’re all wrinkled.” “What are you gonna do?” shrugged Faris when the replies came back negative.

A few adventurous young ladies went for prints, like Zosia Mamet in Honor and Kiernan Shipka in Delpozo. “It’s fun and crafty and sort of different but totally me,” said Shipka, while Mamet called her dress “a mix of fun and dark and edgy.” However, the “Girls” star was more worried about her legs underneath the voluminous gown. “I took a spin class yesterday and I went running this morning, so my legs are a little tired. I know it was ambitious, but I’m still on New York time.”