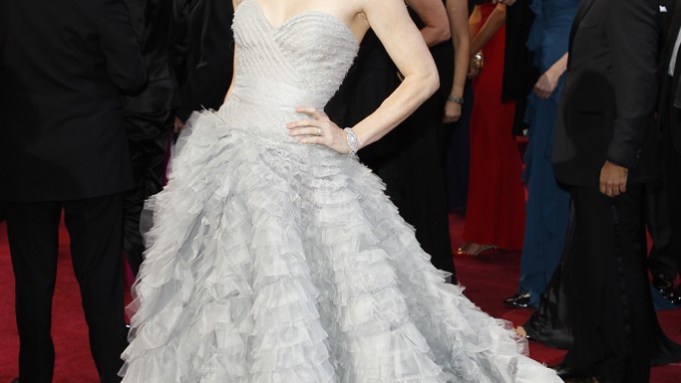 It was a glamour fest at the Academy Awards on Sunday as the A-List donned its finest for the cameras and one another. Jessica Chastain was one of the first to show up at 3:15 p.m., with her boyfriend, Gian Luca Passi de Preposulo, and her grandmother by her side. More than a few attendees paused to take in the best actress nominee’s hourglass figure, showed off in a nude crystal encrusted Armani Privé sheath. “Her boyfriend is a lucky guy,” said one guest. Chastain quickly found herself two steps behind Amanda Seyfried, yelled out her name then grabbed her by the waist. “Oh. My. God. Elizabeth [Stewart, their stylist] told me you were wearing McQueen and I freaked out. It’s gorgeous,” she gasped.

“Jessica and I are pretty low-maintenance,” shrugged Seyfried.

Not so low maintenance was best supporting actress nominee Anne Hathaway, who said of her Prada gown, “I didn’t know what I was wearing until two hours ago. I tried on a ton of dresses and, at the end of the day, I loved the simplicity of it. And this sounds weird, but I’m 30 and I feel 30 in this, And that’s a very positive thing. I feel lucky — to be wearing it,” she clarified.

“Come on girl, you look beautiful,” Bradley Cooper boomed as he walked by “Silver Linings Playbook” costar Jennifer Lawrence and gestured to his chest. “Although now everyone watching on TV just thinks I said, ‘Show me your tits,’” he laughed.

Despite the bawdy talk and her tomboy persona, Lawrence carried off her huge Dior Haute Couture ballgown with aplomb.

“I knew it was the one,” she said. “I mean, we had to take like six inches off the train because it was a little ridiculous, and it still is ridiculous, but I love it.” She was having her own “Hunger Games,” however. “I totally forgot to eat and now I’m starving. McDonald’s is right there,” she said pointing across the street. “Can someone get it for me? I just want a freaking Happy Meal. I can eat it in the bathroom.”

“We’re figuring it out,” her publicist replied.

Although jewelry was generally toned down (save for Hathaway’s major Tiffany necklaces and Chastain’s Harry Winston cuffs), some girls couldn’t help but gush over their borrowed bling. “I’m, like, in awe,” said Zoe Saldana of the Neil Lane diamond rings she wore on every other finger. “Diamonds really are a girl’s best friend sometimes.”

Quvenzhane Wallis, who wore age-appropriate diamond flower studs (“These are Forevermark,” she said, pointing to her ears) seemed confused by one reporter’s question about the best swag she received this week. Although her publicist said she’d get to keep her Armani Junior dress and the bling, she answered, “I got three pieces of candy from one of the ushers.”