On the Road to Recovery: As Donna’s Knee Mends, So Does DKNY

Donna Karan, who is recovering from a broken knee, is also experiencing a recovery in her DKNY business, which she shows today. 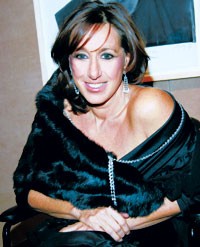 NEW YORK — Donna Karan will celebrate a twofold recovery at the DKNY fall presentation this afternoon.

After retail challenges and several management changes, DKNY seems to have turned the corner and is now on course to experience a quiet but definite renaissance.

The same can be said for Karan herself. Though the designer is still hobbling on crutches or sitting in a wheelchair after breaking her left knee skiing in Sun Valley over a month ago, she is making a speedier-than-expected recovery and was well enough to return to work last week. Karan said that this was the first time in her 35-year career that she had to miss crucial stages of putting together Donna Karan Collection and DKNY, both owned by LVMH Moët Hennessy Louis Vuitton, but she managed to pull off the fashion feat nevertheless.

“From a creative point of view, I am really happy with the result,” she said, sitting in her office at 550 Seventh Avenue last Thursday. “Thank God I had seen pre-fall before the accident, so I knew exactly what it was going to be like. I am pretty much a control freak, and the team did an amazing job of pulling it all together. I am so proud of them that I didn’t have to do anything, except edit what I really loved. When you have a team you have been with for so long, they know you. They know what you are going to say and what you are not going to say.”

The accident happened nearly three years after the designer broke her right knee in the same spot while helicopter skiing in Sun Valley. The irony does not pass unnoticed. Karan rolled up her leather pants that day to show her two scars, and even managed to make a crack about them.

“This is the exact same thing,” Karan said of the fresh scar on her left leg. “I have seven screws in this [left] knee and six screws in this [right] one. I got one more screw this time, so I got screwed. I wanted to have a pair. I didn’t really want to, but destiny wanted me to have a pair. During collections, I have a pretty sick sense of humor.”

Today’s DKNY show will take place at the Algonquin, the legendary hotel that once played host to the Round Table lunch of literary legends led by Dorothy Parker and Robert Benchley. This follows the spring presentation in September, which was held at Pastis with 24 mannequins lounging about on the bar and at tables.

The more intimate show venue and low-key presentation are indicative of the overall direction the brand is taking. Where once DKNY was about big fashion shows with thumping music and of-the-moment models, it is now giving press and buyers a chance to see the clothes up-close in a quiet, quality environment.

But DKNY is not abandoning the tents altogether. The company hired models to distribute its spring ad campaign, which resembles a broadsheet newspaper picturing Manhattan street life and style, at Bryant Park this week.

The changes are part of a bigger plan of reinstating some of DKNY’s core values that appeared to have gone astray over the years, and a turnaround at DKNY will be key to improving Donna Karan International’s future at LVMH.

Launched in 1988, DKNY was never intended to be a watered-down version of Collection, but instead targeted the lifestyle of a young, busy New York woman. DKNY quickly expanded into categories like DKNY Active, DKNY Jeans, DKNY Juniors and City DKNY, all of which are licensed to Liz Claiborne Inc., as well as other licensed categories such as watches, sunglasses, underwear  and fragrances.

“This is not a diffusion line, it’s a line that has its own personality and its own individualism,” said DKNY president Mary Wang. “It’s not as easy as taking the jacket from Collection and making it in a cheaper fabric.”

At the time of its launch, DKNY was a dominant force in bridge areas, but as department store business became more challenging so did DKNY’s core business. The brand also lost market share as customers flocked to Theory, Elie Tahari, Banana Republic and even J.Crew, which offered a fresh take on fashion with item-driven merchandise.

“Whenever you have a brand that is 15 years old, you will have unique challenges,” Wang conceded. “For us, the early years were definitely incredibly explosive and the growth was in leaps and bounds because Donna was the first to do this. Here we are, 15 years later, and there are a lot more people in the competitive marketplace.”

Last year, sources estimated retail sales of DKI to be about $700 million, with about 70 percent of that volume, or $525 million, coming from DKNY. That’s a significant decline from DKNY’s heyday in the 1990s when it was estimated to be generating around $700 million at retail.

Wang explained that the company has retracted its main business to position itself for future growth. DKNY upped its quality, raising the average retail price point from $50 to $200, and thereby slashing the lower-tier distribution which had hurt the brand’s image.

“We upgraded the fabrics, we went back to some of our original factories which are the more expensive factories in Asia and Italy, and we went back to the more luxurious material,” Wang said. “We added cashmeres from Italy rather than using Hong Kong’s. We became stabilized, and our orders show that.”

According to Jeffry Aronsson, chief executive officer of DKI, comp sales for DKNY’s 13 company-owned stores were up 20 percent last year, with a fourth quarter surge of 32 percent. The brand is sold in about 300 stores worldwide. The U.S. market represents about 45 percent of DKNY’s business.

“We are planning for ready-to-wear a conservative growth of 100 percent in five years, and we are looking at tripling to quadrupling the size of the accessories,” Aronsson said. “Our own freestanding stores in addition to specialty store distribution are and will become increasingly important while accessories emerge as the growth engine of the company.”

Wang added, “Accessories potentially could take over ready-to-wear in terms of size eventually.”

“Because of the sell-throughs we have had with specialty stores and with the reaction we have had to our line at the Coterie, we really believe we will have the biggest growth with specialty stores,” she said. “It’s the personality of all the individual owners, and how well they can sell the products. They have incredible customer following with people who will only buy from them.”

Retailers welcomed some of these moves, and noted that the changes are already showing an effect on sales.

“We started to see some change about six months ago in the collection. We have seen some improvement in sell-through in the fall season, and cruise and spring are starting to sell in nicely, so we are encouraged,” said Joseph Boitano, senior vice president and general merchandise manager at Saks Fifth Avenue. “We thought there was more of a focus, moving forward in a clearer direction. DKNY seems to be targeted toward the modern bridge customer which is the business we target to grow dramatically. We will watch DKNY carefully. If  it continues to perform better, we will build it accordingly.”

Frank Doroff, senior executive vice president of ready-to-wear at Bloomingdale’s, concurred. “We think it’s a business that has future growth,” he said. “They went through a rough patch, and Mary has done an incredible job fixing it. The team repositioned the brand, and it now takes a more modern and more of a fashion approach to dressing.”

Stefani Greenfield, co-owner of Scoop, is building the DKNY business at her eight specialty boutiques. For spring, she even collaborated with DKNY on an exclusive group of long linen peasant skirts and long silk bias skirts labeled “DKNY for Scoop.” “DKNY is going to become a major business at Scoop,” she said. “With Mary Wang driving that business, they are in the best hands. They are creating items that have key value and can take you from day into evening.”

These words should be music to Karan’s ears, who has had a few harrowing moments since her skiing accident.

During the snowstorm that hit New York two weeks ago, the designer suffered such cabin fever that she decided to go to Central Park with a friend. After the fact, she came to the conclusion that it was a very bad decision in her condition.

“If you wanted the photo shoot of a lifetime, this was it,” she said. “My friend was wheeling me though the park. She has never wheeled a person in a wheelchair. And of course, I didn’t realize that a wheelchair doesn’t have snow tires. I flew off my chair and on my butt. I thought, ‘I cannot believe this is happening to me.’ I can’t get through the snow, so I asked the kids to borrow a saucer to get me through the snow. We negotiated this whole thing like nobody would believe it.”

The accident also made her want to get a dog to keep her company when she is stuck in bed all day and serve as an extra blanket when it gets particularly cold.

“My friend gave me two dachshunds to be with me, to put on my belly and warm my knee,” she said. “I said, ‘they’re a little small, that looks like an accessory, not like a dog.’”

So Karan took a trip to a pet store and got herself a brown chocolate lab. “I call him Steph, like Stephan [Weiss, her late husband],” she said. “But in my condition, it wouldn’t be too cool to have three puppies. The two Dachshunds are back with my friend in Sun Valley waiting for me. I thought it would be cool to name the two Cash and Mere because you wear them around you.”

“I am trying to figure out everything I can do if I can’t ski,” she said. “I love deep sea diving because it really is another world, and it’s very inspirational for resort.”

For now, she has a more immediate challenge to sort out — how to take her bow at the finale of her Collection runway show on Friday.

“I am a little uncomfortable going out there like this; I have to probably be in a wheelchair,” she said. “Maybe I won’t come out, maybe I will just peek at the end of the show. I don’t know. There’s no question I can’t go on my crutches backstage. I have to be very centered and very controlled to walk on crutches so that nobody can hit me. But with those crowds, I am a little nervous.”