Designers kept true to their signature styles, whether dark or punky, curious or cowboy. 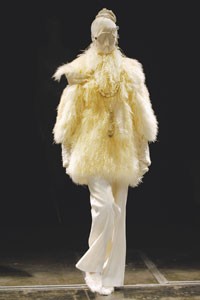 Designers kept true to their signature styles, whether dark or punky, curious or cowboy.

Ann Demeulemeester: With dark romance and layering one of the season’s main messages, it seemed logical for Ann Demeulemeester, the Belgian who has plied the look so expertly in the past, to cash in. And she did, while edging her signature poetic-rock style a step forward. “I wanted it to be sculptural,” explained the designer after the show. That meant an emphasis on dresses, which Demeulemeester cut on the bias and loosely laced up diagonally in the back, creating a sinuous, sexy line. Another to-the-floor confection plunged below the navel and was paired with a furry scarf. Tailored pieces ran from baggy trousers to cool leather blousons and jackets with tails, while fabrics had a worn look, but delicately so, from velvet to leather. Black underscored the whole collection, interspersed with dashes of silver foil-like leather and blue-and-white, tie-dye-printed velvet. One of Demeulemeester’s cleverer ideas was a hooded vest with a long scarf that wrapped around the body. It played on her ultimate signature in a fetching, novel way.

Undercover: Japanese designer Jun Takahashi isn’t exactly known for being tame, and he’s made his Undercover brand one of the edgiest in town. Surely his collection for fall will consolidate his reputation: it was weird, especially with all the models wearing fetishist Hannibal Lecter-like masks. The creepy headgear was tricked out with tribal jewelry or chandelier crystals and made many in the audience a little uncomfortable — while others just snickered. What did it mean? One can only wonder. But there seemed to be a postapocalyptic message in it, as if Takahashi envisioned women wandering a harrowing post-nuclear-war world and assembling their clothes from bits and pieces found amid the wreckage. Undoubtedly his garments have invention and detail, whether trousers that were stitched up the back or jackets with military details that were half unmade and wrapped around the body like a mummy’s bandages. And while some could be easily wearable, like the tuxedo coats and a ruffled black skirt, most remained curious creations from a very curious mind.

Vivienne Westwood: When you have a signature style, why not exploit it? Vivienne Westwood sure has, and then some. For fall, she referenced her familiar trademarks, whether disheveled dresses or slouchy knits. It made for a sloppy hobo-like look with hints of punk attitude: glittery gold trousers; boxy-shouldered jackets and coats, and rumpled dresses and skirts cut on the bias. Plaids were important. A blue wool plaid was used for shorts and square-shouldered jackets, while a barrage of colorful sweaters — one came with a pair of eyes positioned on the chest — showed Westwood at her cheeky best. There were fine clothes. Yet the show, as a whole, lacked pop, and some silhouettes were simply clunkers, especially the awkward skirts and dresses with hoops that flared out unattractively at the hip.

Marithé & François Girbaud: This season, the Girbauds extended the relaxed sportswear theme that is their signature, heading out West for a comfortable silhouette with cowgirl flair. Western-style jackets in cotton or suede were paired with ruffled skirts and blouses that were decorated with pearl snaps and boot-lace ties. Fabrics had a lived-in feel, while colors were muted and faded, from indigo and khaki to red, blue and gray. A military theme emerged in epaulets, standup collars and a series of elegant fitted jackets, while red parkas added a technical edge to the solid collection.