One in a Milian

Christina Milian is a singer and actress — and has a well-organized collection of 100-plus jeans. Talk about multitasking. 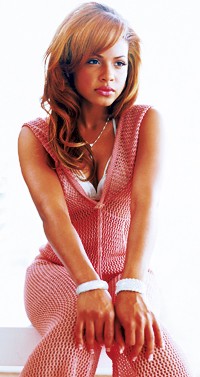 In 2001, she wrote the Jennifer Lopez hit song, “Play,” and lent her voice to Ja Rule’s hip-hop hit, “Between Me and You.” She was the host of MTV’s “Wannabes,” and had a hit single called “AM to PM” on the top of Billboard’s charts. So, Milian might be only 22 years old, but she’s already made her mark in the entertainment business.

This year, she will launch her highly anticipated debut album, appropriately titled “It’s About Time,” on Island/Def Jam Records, and will release two feature films.

Her first major film, “Love Don’t Cost a Thing,” a remake of the Eighties hit movie “Can’t Buy Me Love,” is still in theaters and Milian is just finishing up her next film, “Cheer Up.” In the action comedy, she stars with Tommy Lee Jones, whose character is a Texas Ranger who must protect a group of cheerleaders who witnessed a murder. Milian is one of the cheerleaders.

“I am really tired,” she said in a phone interview from the set at 6 a.m. in Texas, where she was waiting to be called to the next scene. “We are working on the end right now, and it’s a lot of intense action. But we are almost done and then I can rest and concentrate on my album release. I can’t wait for that.”

Her album is slated for a March release and it includes production from some of the heaviest hitters in R&B, including Warryn Campbell, who has worked with Alicia Keys and Brandy, Corey Rooney (Jennifer Lopez, Mariah Carey), Polli Paul (Black Eyed Peas), Bryan Cox (Usher, Lil’ Bow Wow) and songs co-written by Milian. She said she plans to tour with Justin Timberlake for two weeks this month and from there go on a radio tour across the country.

“This album shows a lot of maturing in my lyrics,” she explained. “When ‘AM to PM’ came out, it was much more pop sounding, which worked at the time, but when Sept. 11 happened, music changed.”

Milian said she wrote a lot of the songs on the album, which is appropriate since she was a songwriter before she became a singer. Since she wrote “Play” for Lopez, she has written for various artists overseas.

“When I wrote ‘Play’ and Jennifer Lopez sang it, that was such an amazing feeling,” she said. “It was such an honor and she made it such a big hit.”

Sometime between album publicity commitments, Milian will begin shooting another movie, “Be Cool,” the sequel to 1995’s “Get Shorty.” She is preparing to work with some of the best actors in the business, including Uma Thurman, Danny DeVito and John Travolta.

Filming should begin this month, but Milian’s mind seems to be on the music. Born to Cuban-born parents in New Jersey and raised in Maryland, Milian now calls herself a “Cali girl,” since she has spent most of her life in California. She looks to Janet Jackson for career guidance and calls her mother her best friend.

“My mom is always there for me,” Milian said. “She is my mom, my manager and my stylist. She is so cool and knows exactly what to do when it comes to fashion. I’ve learned a lot from her.”

She seems to be quite the fan of fashion, admitting to owning more than 100 pairs of jeans.

“I’m obsessed with denim, I just love jeans — Frankie B., Levi’s, Diesel — they are all good,” she said. “And they are really well organized, too. I keep my favorite pairs in my top drawer, so I can find them right away.”

Milian also has her beauty routine set, shopping at Nordstrom regularly for makeup. She uses MAC for color, Philosophy products for skin care and Nars for that sun-kissed glow.

“Nars Body Glow is the best,” she said. “It’s expensive — like $60 a bottle, but it’s so worth it. I love Nordstrom for makeup, since they have everything and they always do that free gift thing, which is nice.”